Milo Slowiak is perfectly happy to sleep with a different guy, most nights. Nelson Agnew -- a frequent buddy in Milo's bed -- has been fine with that, too, until Christmas Day, when he changes the rules. Now Nelson wants a relationship, and Milo has until New Year's Day to make his decision.

At first, Milo is upset and decides he doesn't need Nelson. After all, he has all those names in his little black book to choose from. Yet sex with others doesn't erase the lingering feeling that Milo could be missing out on something wonderful, whether or not he's ready for it or can trust his feelings on the matter.

After a heated confrontation, Milo realizes two things: he wants Nelson for more than a notch on his bed post, and Nelson has been in love with him from the beginning. Can Milo change for the better? 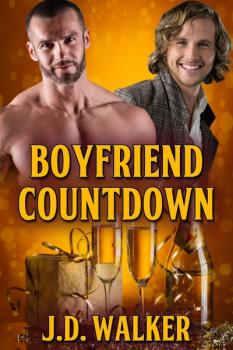 Nelson had always been different than the others. Sure, he was one of many in my little black book, but from the start, he'd tugged on something deep inside me that I'd tried to push down and bury beneath really good sex.

The first time he'd kissed me, I'd been shocked because he'd snuck it in and I never kissed the men I slept with. But then I had to have more, and our lips were constantly locked, as much as was feasible when we were driving each other nuts between the sheets. His taste was like nothing else in the world.

And then when he'd actually fucked me? I always pretended I didn't remember that night and hid behind being drunk. But I did remember. And that had scared me most of all, because Nelson was the only man I'd ever let get that far, and maybe that really did mean something. So could I do this? Be with one man? Forever?

As I pondered these things, I finally spotted him. Nelson had seen me, too and pushed his way through the crowd little by little to finally make it to my side. I handed him a glass of champagne for his trouble.

"Thanks," he said gratefully and tossed it all down in one swallow. "Jesus, I needed that. It's a zoo out there." He motioned with his chin toward the frenzied mob.

"Agreed. That's why I'm over here at the relative safety of the bar." I turned and asked the bartender for a gin and tonic. Nelson asked for the same. Drinks made, we remained next to each other, the music blaring. At least the speakers weren't over our heads.

"Did I freak you out with my confession earlier?" Nelson asked as he sipped from his glass.

I nudged his hip with mine. "It's okay." I decided I'd had enough of talk and difficult decisions. I placed my glass on a nearby table, and did the same with his. "Dance with me?" I asked, hand held out, hoping he would take it.

He smiled a little as he slid his fingers into mine. "Sure."

I led Nelson to the dance floor and as luck would have it, a slow song started to play when we found a spot. I pulled him into my arms and tucked his head on my shoulder. He embraced me and we swayed slowly from side to side, no pressure, no questions, just music. It was nice and Nelson in my arms simply felt ... right.

A Lady Gaga remix came on after our song ended, and Nelson's facial expression turned naughty. Uh-oh. I knew what was coming. She was one of his favorite artists and he went bat shit crazy whenever he heard any of her songs. All I could do was hang on for the ride.

I grabbed Nelson's ass as he gripped my shoulders and hooked a leg over my thigh to do a dirty grind against me right there on the crowded floor that made me want to fuck him through the floor. All thoughts of "should we" or "shouldn't we" disappeared as I met him groin to groin and finally, lip to lip in the filthiest dance ever known to man. Go-go dancers could take lessons from us.

I sucked on his bottom lip as I moved against him, not caring whether either of us combusted right then and there, or who saw it. It was Nelson and me, together again and explosive. No matter what we decided in the future, this would always be us, like fire to gasoline.

One hand still firmly kneading his ass as we moved, I used the other to yank Nelson's head to the side and suck up a spectacular mark on his neck. It would be there for everyone to see. I claimed him as mine, at least for the moment. That was good enough for now.

Mate of the Tyger Prince
Shannon West
In Shelf
$4.99
Tweets by
sirenbookstrand