This short anthology contains three true stories about an old mare who becomes a superstar and her son who takes over where she leaves off. Contains the stories:

Kelly: The Horse I Didn’t Want -- Kelly was already eighteen years old when she arrived at my barn as a thin, nervous Thoroughbred ex-racehorse with a host of bad habits and behavioral problems. Little did I know she would become my equine soul-mate within six months of being given to me for free. She won numerous dressage, show-jumping, and eventing competitions until her death many years later.

Kelly Comes Through -- The story of how Kelly comes to the last minute rescue of a courageous teenage girl in the bid for her Pony Club badge, when her original mount went lame on test day.

Kelly’s Son -- After a rocky birth and a youth filled with accidents and injuries, Kelly’s son Cruz Bay develops into a consistent winner of blue ribbons. But not without more setbacks along the way! 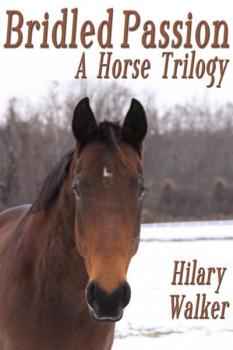 EXCERPT FROM "Kelly: The Horse I Didn’t Want":

The next few months were busy. I exposed Kelly to everything, including showjumping, hunter trials and combined training.

She systematically jumped out of dressage arenas, ditched me at ditches, and steeplechased everything she did jump at a hundred miles an hour. She would kick me in the thighs when I tightened her girth at shows if I forgot her tidbit. Those were exhilarating times.

So why did I, the most average of average horsewomen, persevere?

Because, slowly, something good was happening. Her anxiety level at shows decreased. She began to trust me and jump fences she once refused. My confidence as her owner and rider grew: we were becoming a partnership.

She showed this one day at a competition. I was walking the course of jumps, while two friends tacked her up for me, and returned to find Kelly piaffing and throwing her head up, preparing to break loose.

“She won’t let us put on her tendon boots,” came the reply.

I patted her neck, saying quietly, “It’s Mum, Kelly.” She immediately stopped fretting and let me apply the boots.

My friends were astounded and so was I.