A fantasy for asexual, genderqueer, and dragon loving people.

Ever since their youth, Jorrah has hunted down shining tokens of affection. A ring, a flower, a lock of hair—so long as the trinket glows with the light of love, Jorrah will go to any length to add it to their collection. Their obsession leads them in pursuit of lovers, stopping short once gifted a bright object for their hoard.

A wicked and alluring person stalks Jorrah wherever they go, showing up whenever they begin to settle into a new abode. Uprooting themself repeatedly to avoid the dark presence, Jorrah travels in constant search of a place to call their own.

When they find a home, the past rears from the shadows yet again, refusing to be left behind. Jorrah realizes they must choose whether to continue running forever… or confront the darkness to protect what’s most precious to them. 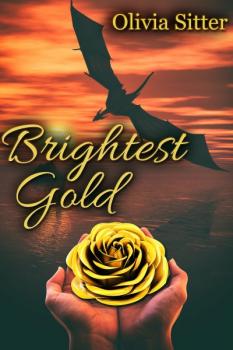 A gaggle of mounted people arrived at the tower late afternoon. I eyed them through a window on the third floor, while packing my tokens safely inside my trunk. They wore mismatched armor and were furnished with everything from spears to pitchforks. Among them was a man I was courting, and I frowned, wondering if I could frighten them away.

It appeared the men were conferring on how to best assault the tower from the way they were gesturing. Folding my wings close to my back, I dragged my trunk up the stairs to the roof, keeping low so as not to be seen. I considered hiding until Worgoth returned, but I was afraid Worgoth would roast the lot of them.

I was also afraid they would storm the tower soon, and find me with my treasure. It’d be easy to flee them, but Worgoth would no doubt hunt me down for abandoning his tower in its time of need. Despairing, I cleared my throat and let out the most impressive roar I could muster. If I was lucky, it would carry through the hills and alert Worgoth. If I was lucky, it would scare away the humans or at least give them pause.

Voice cracking, I swallowed the remainder of my roar. Wilting, I peeked over the balustrade. The horses were frightened, I noted, but the men had dismounted and were peering up with their heads cocked. “It sick?” I heard one man ask, incredulous.

“Blast it!” I said, ducking down again. I should have transformed into Kerra and run from the tower into their arms, like an escaped prisoner while the guard was out. That option was out of the question after my failed roar. Taking a deep breath, I bolstered my courage.

Expanding my wings as wide and high as I could, I raised my head enough to glower over the railing. I hoped they would overestimate my size. “How dare you intrude on my lands, humans!” I said in a menacing voice. It came out more petulant than threatening, however, and I cursed myself again while waving my wings in what I hoped was a frightening fashion.

“How dare you kill our daughters and wives!” a man shouted back.

“What a thing to call your ewes!” I lifted my head enough to spit sparks. “Unless you’re referring to sheep,” I said, “I have killed none of your people.”

“You dare deny it, monster?”

“I do,” I said. An arrow whizzed past my head, setting my spines on edge. “That was unnecessary!”

“How many men have disappeared in their quests to slay you?” It was a bold thing to say, seeing as they were doing the same, but I supposed it was safety in numbers they were betting on.

“I only killed them because they tried to kill me!” I said, glad they still thought I was Worgoth. Assuming he hadn’t lied to me this morning, I was telling the truth on his behalf. “Whyever do you think I’ve been killing your people, anyway?”

“Who else would leave behind desiccated corpses but a monster?”

“You have the wrong monster, then,” I said. I did my best deep growl and glared at them. “I wouldn’t leave behind a perfectly good meal. It sounds like you’re dealing with a vampire.”