Staff Sergeant Matt Warwick returns from war with two broken legs—and a shattered future. Abandoned by his fiancée, he withdraws into a protective shell to hide from the pity filled glances thrown his way. His squad worries he’s fallen into depression, and arranges a 1NightStand through the renowned Madame Eve. Matt agrees but fears he will not be able to satisfy his date, for who would want a crippled man in her bed? Tiffany Forsen escaped a brutal relationship, and seeks to jump-start her life with a fling. Bars aren’t her scene, so when she hears of the fabulous 1NightStand service, she contacts Madame Eve immediately. All she wants is a night of fun with the hot guy in her picture—but winds up with much more. Can she convince him that she doesn’t see a crippled man…but a hero? Or will his defenses keep her at arm’s length?

He snorted at the same time as he took a sip of champagne. It spewed out, spraying all over her chest. His hand covered his, but he ruined the effect by bursting into laughter.

“Well, I didn’t see that coming,” she murmured.

“I’m sorry. But if you could have seen the way you looked at me,” he managed through his laughter. He lost it again, doubling over in renewed merriment. Seeing him so happy, so carefree, made her lips twitch into a smile as well. “You’re so small, and dainty, but you looked ready to track her down and beat her to death. Maybe you should enlist in the Marines.”

“Blasphemy,” he said, wiping the tears from his cheeks. “God, Tiffany, I don’t remember the last time I laughed so hard. Or at all.”

Their gazes collided and they both froze. An invisible pull, some indescribable magnet, pulled them closer, even as it built up tension. Her stomach clenched, and her body tingled from head to toe. The man’s ability to weaken her with desire was laughable. If he made her this hot before trying, imagine what he’d be like in the bed. Or on the floor.

“Then it’s been too long.” She rose to her feet, ready to get things moving. She had the perfect excuse. Knees wobbling, she turned her back to him, slanting a coy look over her shoulder. “Can you unbutton me? I want to get out of this wet dress.”

He swallowed hard, set his champagne down next to hers, and wiped his palm on his jeans. Reaching out, he parted her dress one button at a time. His fingers brushed against her skin with each movement, making her bite back a moan. Her legs grew even weaker, her knees shaking. How much longer would she be able to remain standing?

When he reached the last button, right above her butt, she took a steadying breath, shrugged her shoulders free, and allowed the dress to float to her feet. He drew in a harsh breath behind her. She turned to him, her red lace panties and matching bra her only clothing. She kicked her sandals off, paused—dare she be so brave?—and slid onto his lap.

She met his eyes, running her fingers down the arms she’d been admiring from afar all night long. “Excuse my forwardness, but I can’t wait any longer to have you.” 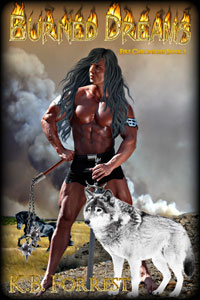 Burned Dreams
K. B. Forrest
In Shelf
$4.99
Tweets by
sirenbookstrand