Olivia Raines travels to Kansas in 1890, headed for her first assignment as an investigator for the federal government. Her mission is to solve the mystery of boys that have arrived on the Orphan Train and vanished.

Out of her element in Kansas and thoroughly unprepared for an assignment of this nature, Livvie's horrified to discover two facts: Her cover is to play the new schoolmarm in town, and she's been assigned two bodyguards - a pair of devastatingly handsome twins.

Livvie's determined to solve the case and claim both of the McBride brothers for her own. She is, after all, Jessie McGee's daughter and takes after her mother in more ways than one.

Heat Rating: Scorching
Word Count: 80,382
58 Ratings (4.3)
Menage a Trois/Quatre Western/Cowboys
In Bookshelf
In Cart
In Wish List
Available formats
PDF
HTML
Mobi
ePub
Cover Art by Mark Luedtke
Reviews
An excellent follow on book. Loved the characters
Jlg29
Well this was such fun to read. The brother were great! Is was one of the better sequels I have read. I would love more with these three!!!
Wish there would have been one more chapter. Thanks
Meg_an_aggie_in_Frisco
Read more...
Professional Reviews

5 CHERRIES:  "In this fantastic sequel to Kentucky Woman, a young woman discovers a passionate relationship with the twin bodyguards assigned to protect her. This was such a wonderful and absorbing story that I didn't want to put down. I especially loved the characters of the story. Livvie really surprised me as despite her confidence and background, there is a naivety and innocence about her. At times she displays a vulnerability which really is quite touching. However, she is a little spitfire and is constantly surprising the brothers with her honesty and daring. I loved this story a great deal. With fabulous characters and a fascinating plot, this is one I was glad to have read." -- Lilac, Whipped Cream Reviews

5 STARS: "Buckskins and Brocade is the sequel to Kentucky Woman and is just as entertaining. I had the pleasure of reading the first story, and couldn't wait to get into this book. Olivia Raines is her mother's daughter. She is feisty, independent, and so unique I couldn't help loving her character. Connor and Desmond are home-on-the-range sexy with just a hint of shadows to keep you drooling. The men fight like cats and dogs, which is just what I would expect from twins who spend all their time together. I just liked them, Connor with his seriousness, and Desmond's constant laugh. There were numerous secondary characters throughout this story and they all played valuable roles in keeping it real. Sexually, these three start out hot and each scene turned up the heat until the final scene, which left me panting! This story didn't bombard me with sexual scenes just for the sake of sex, and I honestly appreciate that. Buckskins and Brocade is a great read all the way around." -- Stefani, Just Erotic Romance Reviews

Livvie flung open the window and leaned out, inhaling the warm scent of summer. She ruffled her hair, trying to capture any hint of a breeze to dry her damp curls. She turned as the men came into the bedroom. Desmond flopped onto the bed and Connor dropped the towel around his waist then sprawled in the chair, flinging one bare leg over the arm.

“The kid’s washed up and sleeping in my room. My belongings are currently sitting in the hallway. Not sure how all this is going to work. Any ideas, boss?”

“Then bring your things in here. Desmond can get his too.”

Desmond rose up on his elbows. Connor shook his head as he said, “Oh, no. That can’t be a good idea.”

“It’s the only logical thing to do. I’m a married woman. Married women sleep with their husbands.”

“Are you serious?” Connor asked.

Desmond sat up. “You’re planning to let him see what’s going on in this house?”

“Wes has more important things on his mind than what’s happening between us.” Livvie put her hands on her hips. “The way I see it, he knows he’s safe for now and he’s grateful for it. As long as we’re trying to help, he’s not going to care what the three of us do. Someone tried to abduct him.”

“All the more reason for us to keep a low profile in this town,” Connor said.

“Which is just about impossible since we’ve been the talk of this town since before we arrived.” Livvie moved closer to the chair, her mind suddenly on things besides abduction and the children of Fort Cloud. “Besides, I’m not exactly the low profile type.” She loosened her robe and let it slide down her arms. The fabric fell into a silky mound at her feet.

“Looks like someone has their confidence back,” Desmond said.

Livvie ran her hands down her thighs. She loved the way Desmond tracked the movement. “I was scared out of my wits for a while there. And the condition of the school almost made me panic. But I’m feeling better now. A lot better.”

She dove toward him and he caught her, flipping her onto her back. The wet strands of his hair slid across her face like satin. “We’re going to do this, Des. I don’t have any doubt in my mind. As soon as I—”

He captured her mouth in a kiss that stopped her words then made her forget them altogether. He slid his arm under her waist and slowly moved her until her head rested on the pillow. The mattress sagged for a moment with Connor’s weight and her thighs were pushed apart. As Desmond began to suckle her breast, Connor’s mouth latched onto her clit.

Both mouths felt amazing but she couldn’t concentrate on either one because each sent a ripple through her entire body. She just allowed the sensations to swamp her, enjoying the flickers, the tremors, the vibrations that flowed beneath her skin and made her pussy pulse in anticipation and leak moisture into Connor’s mouth. He lapped it up greedily.

Desmond’s tongue circled her nipple while his hand tweaked the other one then pinched it between his fingers, rolling and pressing until her pussy clenched with the same rhythm.

“I need one of your cocks in my mouth right now.”

“Give the lady want she wants, Des. I’m planning to put mine in her pussy. I’ve got it just about as wet as I want it.”

Desmond got to his knees and straddled her face, dipping low. She grabbed his cock, running her hand up and down the smooth hard length, pumping as she watched his face. The musky scent of his arousal surrounded her and made her mouth water. She licked her lips and Desmond lunged, driving his cock into her mouth.

Connor rose to his knees and hooked her knees over his arms. She couldn’t see his face but she felt the soft prod of his cock at her entrance. It slid softly over her folds, dipping and bumping against her flesh. She wiggled slightly, wanting it inside. Connor took the hint and slammed into her. He gave an exaggerated groan. Livvie giggled.

“Can’t say that I like the view of Desmond’s ass,” he said, “but I can see his cock sliding in and out of your mouth, Liv, and I gotta say…damn that makes up for it.”

She would have said something but her mother had always said not to talk with her mouth full. She giggled again at the thought then the giggle died in her throat as Connor’s began to finger her clit, rubbing gently as he rocked into her body.

Desmond’s cock swelled in her mouth. Her tongue traced the engorged veins, licking and feeling the pulse of his blood through the taut flesh. She sucked harder, knowing he was almost ready to come and reached between his legs to cup his balls and squeeze gently. Desmond’s fingers dug into her upper arms and her mouth flooded with the salty taste of his cum. She swallowed several times then continued to suck, enjoying the way his cock softened in her mouth. When he pulled out and fell to her side, she turned her face for a kiss. His mouth swooped onto hers just as the orgasm built within her.

Her legs tightened in Connor’s arms and she arched upwards, grinding her clit against him. He pumped harder, rougher. Desmond sat up and watched as his brother’s cock slid in and out of her.

“Talk about sights. Her juices are all over you. Lucky bastard.”

Connor’s words came out in a rough whisper. “Damn right.”

He straightened, yanking her tight against him. Her orgasm exploded and shudders racked her body. Desmond caressed her breasts as heat engulfed her, sending ripples of fire from her pussy through her limbs and into her face. Her nipples peaked and Desmond took advantage to pull one into his mouth and suck. The draw of his mouth sent another spasm through her and when her pussy clenched down on Connor’s cock, he came with a spasm of his own. His body shook and jerked against her then he collapsed forward. Desmond lurched away just before Connor landed on top of Livvie with a grunt.

“I gotta say I like married life,” Connor murmured.

“Next time we’ll switch. She can eat my cock and you can eat her pussy.”

“Neither am I,” Livvie said, “but breathing would be nice.”

Connor rolled to the bed and gave her a smile. “You’re a demanding little wife, you know that?”

“You wouldn’t have it any other way.”

“Sure wouldn’t,” Connor said. “But I am glad I have ranch duty tomorrow. I need a break.” 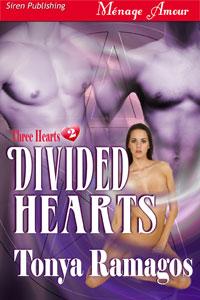 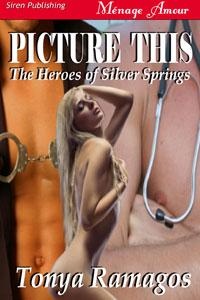 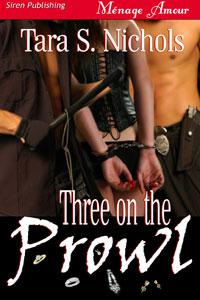 The First Time is the Sweetest (MMF)
Erin M. Leaf
In Shelf
$6.99
Tweets by
sirenbookstrand