By Her Own Wits

It’s a man’s world—except perhaps in the eyes and actions of strong women willing and capable of using their wits and wiles (and sometimes their men) to get what they want. By Her Own Wits offers six short stories of woman down through the ages, from ancient Egypt to the shop floor of a small manufacturing plant in Virginia, who, finding themselves in a bind, use their wits, wiles, and men to not only survive but to forge ahead in clever, and sometimes humorous and “atta’ girl,” twists of plot. 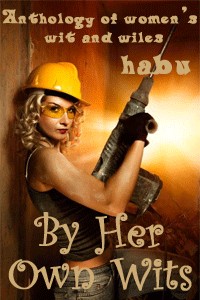 By Her Own Wits

The greatest impression that Osten Westfalen made on Rosemund was that it was cold and barren—just the opposite of what she was sent to accomplish here.

Her own people loved her and reveled in her familiarity and her voluptuous gaiety as she moved freely about her father’s domains, dispensing smiles and playful suggestive banter to all, regardless of talents or station. Hers was a happy, warm, jolly kingdom.

And she had traded it for this pile of dark rock set high on a barren ridge, with nary a smile or cheery hello from any of those standing along the pitted and puddled coach track leading from the border of the northern German princedom, through the dreary town of Manz, and up to the duke’s castle. What Rosemund saw instead on the faces of those standing back to watch her passage was worry and a hint of hope swallowed in a sea of hopelessness. This, better than anything else, had brought home to Rosemund the responsibility that had been laid on her shoulders—a mere woman in a world of grasping men. In each face, Rosemund saw the recognition of looming war and destruction, and just the glimmer of hope that some miracle would stay the sword hands of the scheming counts—the grafs—of the duchy.

If Rosemund had expected better when she’d reached the castle and her carriage had rumbled over the drawbridge and under the portcullis and into the echoing inner courtyard, she was sadly mistaken. The faces on the menial servants in the courtyard were the same as those out on the muddy road, and only that of Ritter Horst, the duke’s chief adviser, who was standing on the outer steps of the inner hall, awaiting her arrival, offered a visage of hope.

The Ritter was a graybeard, but this aging of his hair may have resulted from the burdens of counseling and substitute governing, Rosemund thought, as he offered her his arm when she descended from the carriage. Belying the gray, he seemed a solid man, strong, big of bone, and ruddy in appearance. The picture of health. And Rosemund sensed a healthiness in him in another regard too, one of great importance to her. The look he gave her was one of self-assuredness, comfort in his own virility, and an instant interest in her that Rosemund found all too familiar. She was sure she could have him, if she wanted him—and in this lay her greatest weapon. He was of strategic importance in the duchy, and it was with less doubt and fear and trembling that Rosemund entered the great hall on his arm.

They followed the rich, red carpeting toward the dais at the far end of the hall. Many of the obviously minor nobles gathered on each side of the carpeting were looking at her with the same forlorn, doubting hope that Rosemund had seen on the faces of the peasants on the road. Those in finer array looked at her with more speculative visages. The latter seemed parted, dressed in three separate liveries, holding apart from each other, the men’s hands on their sheathed sword handles, and Rosemund could feel the palpable tension and danger in the room. No one would have had to tell her that the duchy was a tinder box awaiting the flare of an unbalancing event. She also saw that the men of the three counties looked at her with another aspect of speculation—a lustful one. Most of them wanted her. And, confident in who she was and the effect she had on men, Rosemund reasoned that the men who didn’t look on her with lust must be saving that look for other men. She marked the build and bulges of the men, as she passed, and was pleased that most were of good stock and interesting possibilities.

Her study of the men in passing, though, was neither purposeless nor a halting effort to delay her appearance between the bent-over old man she could see struggling off a throne on the dais at the apex of the hall. She was looking for something in particular. And when she saw it, she was surprised. But she smiled a little inner smile, intrigued by the challenge it posed, ready for the game.

She steeled herself as she stood before him now, the Herzog of Osten Westfalen, the Hapsburg Duke Stephan. She smiled her prepared smile, determined to prove out as the actress she knew she was.