Damian Garza and Alex Murphy became best friends in their closed-minded California small town, remained inseparable through Alex's coming out, and have stayed close while studying at different colleges. They're close enough that Damian dares a shocking e-mail confession: he's bisexual and wants to experiment with men. With Alex.

It's supposed to be a simple friends-with-benefits arrangement, one weekend only. Then one weekend turns into two, then three, then a whole season of unexpected passion. But life after graduation can't be ignored; soon Damian will be obliged to return to his family's orange groves, and Alex will fly off to his dream job in Europe.

Unless they can admit their feelings to each other and the world, their time as best friends may be over. 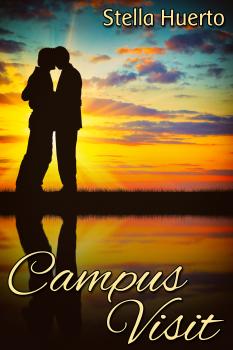 Damian stuffed his hands into his jeans pockets. “Honestly, these thoughts have crossed my mind since high school, since you came out. And they’d gotten so much stronger this year that it was driving me crazy. Knew I had to ask before I went insane.”

“I’m flattered. More than happy to help.” Alex glanced at the bed, as if to make sure it was ready.

Damian’s gaze followed, taking in the blankets thrown back to reveal an expanse of ocean-blue sheets. Nervousness tussled with his desire, and he looked at the wall instead, at a comforting Van Gogh print. “Has anyone else ever come to you with a request like this?”

“Not exactly.” Alex brushed his hair out of his eyes. “One guy I dated a couple years ago was still in the closet, so I was his first. But I’ve never had a bi guy, as far as I know.”

Damian nodded, shifting his feet on the worn rug. “You never guessed I might be?”

“Guessed? No. Wished, yes.” Alex’s eyebrows darted upward as he glanced at Damian. Then he chuckled, closing his eyes a moment. “I was waiting to meet a professor when I got your email. You made me go through the whole meeting with a stiffie.”

“Is there anything in particular you’re hoping to do?” Alex asked. “Or not do?”

Damian walked forward and set his hands on Alex’s hips, pulling them forward to touch his again. Brushing his lips against Alex’s, he said, “I have some ideas.” But his face flooded hot at the idea of voicing them. So he ducked his head to kiss Alex’s cheek, exploring the texture of stubble against his lips -- that was new, for sure. The difference excited him rather than putting him off.

Alex’s hands slipped beneath his T-shirt, on both sides of his waist this time. “Do you want to roll around a little, or ...”

Damian closed his eyes. For starters, I want you naked and I want you to come in my hand. Though his mind said it readily enough, his mouth was too conditioned by years of repression, and wouldn’t. “Maybe if we ... touch,” he whispered, against the ridges of Alex’s ear. “And look.” Would Alex get what he meant? To make certain, Damian settled his hand on Alex’s erection, on top of the cloth.

Alex’s hips pushed up into his palm. He swallowed and cleared his throat. “Okay. Um. You just got here. I don’t want to rush you or freak you out, so you should know that this is already really hot and touching might lead to, uh ...”

Alex’s mouth moved into its endearingly sincere grin. “Okay. And hey, if you hate it, it’s still early enough that you can get back in the car and drive to Fresno.”

Damian rolled his eyes, and without wasting more time on banter, drew Alex forward and kissed him. 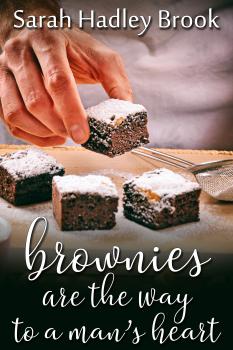 Brownies Are the Way to a Man's Heart (MM)
Sarah Hadley Brook
In Shelf
$1.99