Careful What You Wish

Wishes sometimes come true, or do they? While tuning an older woman’s piano, Carlson notices her photo at a much earlier age and finds her enchantingly beautiful. He wishes he could have been around when she was young so he could seduce her, make love to her. Did his wish come true when he returned to her house the next day for his forgotten tools? He has reason to believe it did. 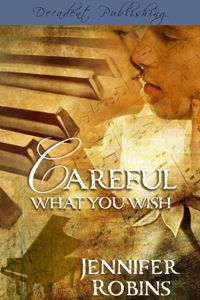 Careful What You Wish

He could only imagine her in her youth, smiling, taunting a man like him. He was sure Miss Lillian was no powder puff back then because of the tantalizing smile she wore in the paper rendition of an earlier version of her.

He continued to admire the beautiful woman pictured in that eight by ten frame with desire. But wishing doesn’t make it happen, he thought. What I wouldn’t give to meet someone like her.

The younger version of Miss Lillian was so striking he couldn’t take his eyes off the lovely image of her. If only he had been born back then, he thought as he admired her lovely smile, her enchanting beauty. He absolutely would have gone for a relationship with her. His mind rambled on about having a romantic, passionate courtship, but there was tuning the piano to be done, and dreaming over something that could never be wouldn’t get him started.

With his work at hand, he set the photograph down to get back to the piano, took his tools from the case, and began his job of tending to the Steinway.