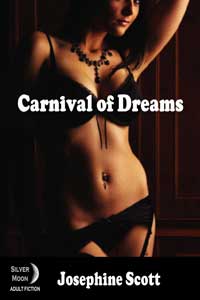 She had an appointment now, one she had to keep, for that evening Ian was going to try nothing but pure bondage, to see how she got on, see if it turned her on. She knew it did wonders for him, even with the tight leather suit, but for herself... bondage was not something she had considered although it held a certain kinky interest for her. What the hell, she had done just about everything else, hardly went without a bruise or a cane line these days and he was talking about paying to have her nipples pierced and beautiful coloured titanium rings inserted, blue to match her eyes. She had seen young girls with pierced navels flaunting the coloured rings, never dreaming she would have some herself. So far he was only talking about it but Belle already knew that this master of hers never spoke idly about something; it was always preparing her for the event, no matter what it was.
The evening was soft, a gentle drizzle falling, coating everything in a mist that caught the lights from shops and restaurants, causing millions of tiny crystals to glow all around her, from the wall along the esplanade to the window sills and window boxes of the hotels and guesthouses. She rang the bell dead on time, curbing the urge to pace as she waited for Ian to open the door. So much energy these days, it needed an outlet of some kind. Tonight she could have walked the whole of Sandbourne and still been awake half the night. No one had told her that sexual excitement could generate so much energy.
‘There you are.’
‘Yes, master.’
Golden light spilled out from the hall into the communal corridor. Belle waited for him to stand aside and motion to her to enter - only once had she the temerity to walk in without being formally invited, not something she would ever try again unless she really didn’t want to sit for a week.
‘Is it raining?’
‘No, fine drizzle, it’s gorgeous, everything looks as if it’s covered in tiny crystals.’
‘Lounge tonight.’
‘Yes, master.’
She kicked off her shoes, which were a little damp, and walked into the lounge, treading the pure white carpet with the usual feeling of luxury. Whoever had a white carpet and kept it like this? Someone as immaculate as Ian Smithson, of course.
White ropes lay coiled on the dark leather furniture. It sent a shiver down her, almost of fear, certainly of trepidation but also of deep sexual excitement. She knew the erotic aspect would take over from any fear she had; she also knew she trusted him completely. She felt the trust was mutual; it would not do him any good to have it broadcast all around the hotel that he was into bondage; Colin Norton wouldn’t allow him near a guest again, especially a female one. Apart from Angie and Louise, no one knew.
‘You can sit for a moment.’
‘Thank you, master.’
She perched on the edge of the leather couch, eyeing the ropes, wondering what he had in mind, what ordeal she would endure before the evening was through, how long it would be before she felt the bite of the ropes and the contortion of limbs into places they shouldn’t go and realised her imagination was taking over and creating scenarios that were probably a million miles from reality, and wondered if she wanted them to be.