When Karen dumps Greg, he tries to keep the relationship going with a simple plan: become the kind of guy she wants. He needs to prove he’s decisive and can take initiative, qualities she admires. Not to mention he needs to read Ernest Hemingway’s For Whom the Bell Tolls for a class presentation. Middle-aged Victor arrives at the local hangout, a dam called The Cascades, giving Greg the means to succeed in the plan. Victor has a romance problem of his own, as well as a drinking problem. Greg attempts to help Victor sober up and reunite with his estranged wife, all in hopes of winning back Karen. Then tragedy strikes at The Cascades, and Greg is left to question love, the value of a life, and how he will ever finish his book presentation. 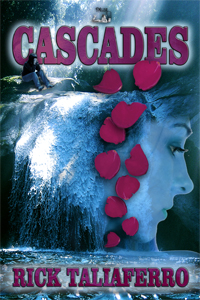 Victor and I started for the top of the dam to cross it.

Dave stepped over and stood in front of me. “What would be original is if you would jump, Greg.”

“What? You have to hide behind his skirts?”

“Have to do what?” Victor pushed past me and leaned into Dave’s face.

Dave’s grin flickered out as he backed up, almost to the edge of the drop-off.

“Have to do what?” Victor threatened.

Dave didn’t say anything, his Adam’s apple bobbing as he swallowed. He tried to chuckle. “I was just kidding.”

“Thought so. Got any more kidding you’d like to do?”

Victor went to the dam ledge.

Dave glowered at me like that was the end of whatever friendship we had. It seemed pretty unanimous: first Karen, now Dave. But the look on his face when Victor confronted him was worth losing his on-and-off friendship. A weak breeze stirred the air for a second as he and I glared at each other. I thought a thunderstorm might be moving in, but no rain clouds hovered in the drab white sky.

I walked to the ledge. As I passed Dave, he swiped the book out of my hand and skipped backward. He stood with Blondie, the two of them smirking. Karen had a slight smile on her face.

“What, you’re too good for our company,” Blondie said.

“Can you talk to him?” I asked Karen.

I moved toward them. They moved away.

“Look, I don’t want to waste time chasing you around,” I said.

“Don’t be so stingy.” Dave flipped through the pages. “I just want to see why this is so interesting that you can’t jump.”

“That’s got nothing to do with it.”

“Maybe the fact that you’re a jerk.”

Dave grinned and cleared his throat in an exaggerated way. Then he yelled the title of the book several times, a little different tone of voice each time, real hammy.

Some of the other kids looked over at us.

Victor had stopped at the dam and watched.

Dave opened the book and read Donne’s quote in a put-on English accent. He made big waving gestures, looked up at the sky, and strutted around. People noticed and laughed. At that point, I hated Dave, but I couldn’t help smiling at his antics in spite of myself. He circled around me as he neared the end of the quote and said to my face, “It tolls for thee.”

Then Blondie said it in a mock deep voice, and Dave said it again, and Karen and some others chanted it, too.

I shook my head, tried to humor them, and Victor seemed to mumble the words like they were cuss words.

When they stopped chanting, they clapped and cheered. Dave bowed several times.

“Bravo, bravo.” I held out my hand for the book. “Now come on, I got to go.” I angled for a way to grab the book but not have a tug of war and rip the pages.

“Not without the book. It’s not mine.”

He thumbed through the pages, saying, “Hmmm, hmmmm,” and glanced up at me to see what I would do.

But I didn’t have to do anything because Victor shouted, “Give it!” His yell echoed as he charged past me at Dave.

Bug-eyed Dave lurched to the side, and Victor flew past him and almost fell on his rear when his leather-soled shoes slipped on the stone. “Smart punk,” he umphed and turned and stalked Dave.

Dave tossed the book to Blondie near the drop-off.

Victor swung around and went at Blondie who zig-zagged backward, saying, “I’ll have to see your library card.”

Victor grabbed for the book.

I tried to sneak up on his side where I could grab him in a bear hug.

“Where you going, Stevenson?” Dave asked.

Blondie saw me and stepped away.

“Gimme it,” Victor said, almost pleading with him.

“Here it is,” Blondie said. His back was to the drop-off and he held up the book, shook it by one of its hard covers.

I got ready to rush him.

“You guys.” Karen took off her sunglasses, and her eyes were kind, sort of. “Give him the book.”

“Yeah,” someone said in the crowd that had gathered.

Instead of rushing Blondie, I went to Victor and took him by his muscular arm, thinking they would stop if we stopped, and I’d make a grab. “Let’s just get out of here,” I said, wondering how much it would cost to replace the book. Any price was worth not seeing Victor get more humiliated.

He shook my hand off like it was a leaf and lunged for the book.

Blondie backed up a few steps and chucked it to Dave.

Victor pretended he was going to jump at Dave and fooled him into pitching it back to Blondie.

The book arced high, and Victor jumped up several feet to intercept it, one knee up and his arm straight out reaching for the book, but it went over him and down into the churning water below.

I’ll never forget the sight of Victor in the air, like a ballet guy, his shirt untucked and red plaid boxers and bare paunch exposed. The brightest object in the pasty sky, before he stumbled over the drop-off.