Barely six months into their marriage, Carrie Llewellyn begins to suspect her husband Cash is keeping secrets from her when she finds a pair of sexy panties stashed beneath their bed.

Panties that aren't hers, and are frankly way too large for her small frame. She can't believe Cash is cheating on her -- he's the perfect husband, sensitive and helpful, and satisfying in the sack. But whose panties are these?

There's only one way to find out, and Carrie confronts him when he comes home from work. But his explanation is not quite what she expects. 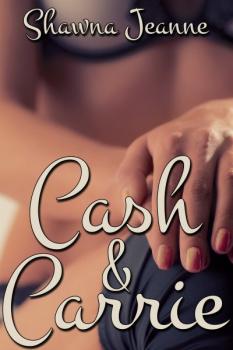 With a name like Cash, Carrie hadn’t really known what to expect -- the image of a tall, gangly man in cowboy boots and a Stetson came to mind. Saundra had shown her a blurry photo of a bunch of guys in work uniforms posing in front of an electric company bucket truck. She’d pointed out which one was Cash, but Carrie couldn’t really make out anything about him. He had short hair trimmed in a classic boyish cut. He did have big muscles in his arms, but then again, all the guys seemed to, and their shirt sleeves were rolled up over their elbows, which enhanced their biceps. But he had on a pair of wraparound sunglasses, and he wasn’t smiling at the camera. Even after staring at the photo all throughout class, Carrie wasn’t sure what he looked like.

On their first date, he hadn’t worn cowboy boots or a hat. He’d been dressed in a nice, clean pair of jeans that looked fairly new and even ironed, which said something. A button-down shirt was tucked neatly into the jeans, and the blazer he wore over the shirt gave him a “business casual” appearance. At a glance, his shoes seemed to be real leather, and shone with care. His dark hair was cropped close to his head, and his blue eyes sparkled when he saw her.

Up close, he really was quite a hottie, as Saundra had said. Sharp cheekbones, straight nose, firm chin, and high eyebrows made him quite pretty to look at, and when he pulled out Carrie’s chair at their table in the restaurant, one thought flashed through her mind.

He had to be, right? No straight guy looked so handsome, or dressed so well, or treated her so nicely. He ordered off the menu in flawless French, knew which wine would go best with their dinner, and seemed to only have eyes for her the whole night. By the time he dropped her off at her apartment, Carrie was half in love and completely convinced he was waiting until they said goodbye to break the bad news to her. I had a lovely time, really I did, but you see, I only agreed to do this to shut Saundra up. I’m happily involved with a sexy architect named Pierre ...

But that didn’t happen. Cash had given Carrie a chaste kiss, true, but he said he would like to call her later, if she was interested in seeing him again. “You mean, like another date?” she had asked, her heart beating in the back of her throat. Please, please, please say yes.

Theirs was a whirlwind romance. Cash wasn’t like the other guys Carrie had met -- he was kind and considerate, almost gentlemanly, opening doors for her and making her feel the way she had always wanted to feel. Like someone special. Someone precious.

Four months later they were married, despite her parents’ objections. They wanted her to finish college first, but she was already in graduate school, and at twenty-eight, she’d waited long enough. At first, being Mrs. Llewellyn was bliss. Carrie moved into his home and continued with her studies, while he put in long days as a lineman for the electric company. When he came home in the evenings, dinner would be waiting for him. But he was the one who did the dishes, and on weekends, he always insisted on doing the laundry. “You already do so much for me, honey,” he would say if Carrie objected.

But, really, what was there to object to? Cash was a neat, clean man, and Carrie loved him for helping out around the house. Whenever her girlfriends complained about their live-in boyfriends or husbands being unthoughtful and messy, Carrie just grinned. She was a lucky woman, she knew.

Then she found the pair of red lace panties under the bed.

Panties that were sheer and sexy, and much too large for her.

Suddenly Carrie wondered if there was something Cash wasn’t telling her.