On a dare she finds herself here at a nudist camp, hovering inside the shower, praying the floor will open up before the water turns to ice and she has no choice but walk across that cavernous floor-to-ceiling windowed room and climb into the Olympic sized hot tub.

The idea is frightening enough when she believes she had this portion of the nudist camp all to herself, but the Fates stepped in and the other shower ran, turned off, letting her hear the slapping steps of another bather making the water churn upon entry out there to see all her insecurities.

Run! She needed to run. But she would never be able to live with herself if she turned coward after the four long hours it took to drive her. 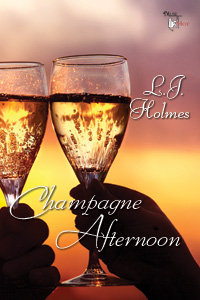 The days when this aging body of mine breathed life into the skimpiest of bikinis were distant memories. Shifting sands of time had created mountains and hills where once there had been inches of smooth desert flatlands. Assorted networks of silvery scars, some from childbirth, and some not, mapped a course more detailed and winding than a spider’s web, with a few too many detours and side trails for my peace of mind.

“You’re not as hopeless as you think.” Dr. Harrison had said more than once in response to my voiced insecurities. “Yes, your body has changed, but not as greatly as you seem to think. Forget the programming you’ve allowed yourself to buy into. It’s time to take a chance and let the real you shine through.”

“Take a chance.” Dr. Harrison’s words echoed and re-echoed inside my head, and with the jetting water nearing iceberg sharp coldness, by the very second, I soon would have no choice.
Stiffening my shoulders, I gave myself one final pep-talk, murmuring. “You’ve made it this far, woman, you’re not going to turn coward now, are you?”