Change for the Better

When Flynn meets Tanya at a table-top RPG campaign, his first impression is that she's the kind of girl he'd like to get to know. He does just that; however, not only does he discover they make a great pair, but he also learns she isn't really Tanya.

Despite being a tried-and-true heterosexual, Flynn chooses to stick with Tony anyway and supports him during transition. Their initial one night stand turns into a wild and dedicated relationship. They -- and their RPG characters -- face many challenges. Flynn and Tony seem made for each other, the sex is more than incredible, and Flynn is willing to brave it out, but a Willpower check isn't enough to rid him of his crippling doubts. Will the love they share be enough to overcome the antagonism they face in the real world? 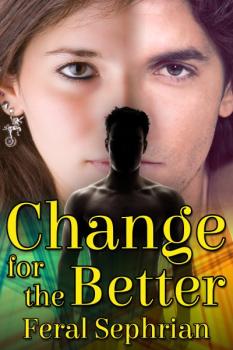 Change for the Better

Tanya was packing up her stuff, her eyes deliberately tracking everything that went into her bag. She gave perfunctory farewells to everyone, but she didn't look at them. Flynn shouldered his bag and approached her hesitantly. "Hi."

Tanya lifted her head enough to check who he was, then quickly lowered her gaze again. "Hey."

"You wanna hit up Starbucks? The rush shouldn't start for another twenty minutes or something. We could at least grab some drinks to go."

"I asked if you wanted to get something to drink. Decaf latte with a pump of vanilla, right? My treat."

Tanya looked up at him with a puzzled expression. "You ... you still want to hang out with me?"

Flynn shrugged. "Sure. If you're not busy."

"You're you. I've barely gotten to know you, so what does it matter if you're going to change? I'll get to know who you become. Might as well start now, while you are ... starting ... to ... become?" Flynn shut his mouth before he could fumble out the rest of that unfinished thought.

They walked to Starbucks in silence. Flynn wanted to hold Tanya's hand or something, but didn't want to seem too forward. She appeared lost in thought anyway. Whatever worries she had, he hoped she felt comfortable talking about them with him. While he had never had any deep dark soul-eating secrets, he could imagine how much he would want someone to talk to if only it would make things the slightest bit easier.

The first thing she said to him was at the counter. He let her order first, then stepped in to tell the barista they would be ordering together and he would be paying. Tanya said, "Don't --" She stopped herself abruptly, sighed, and stepped aside so he could place his order. After that, it wasn't until they were sitting on the sofa chairs that she spoke again. Even then, it took her a few sips of coffee and a couple false starts before she found the words she wanted. "I'm sorry."

"That I didn't tell you right away. We started flirting, and I was ... was glad to have someone like me ... but it's not ... it's not me." Tanya gestured to herself with a wave of her hand. "This was never me, not really, but it's what you saw and what you flirted with and I was too vain to stop."

Flynn took a sip of his drink. "I thought you wanted to flirt with me. Maybe I was reading you wrong, but --"

Tanya sighed. "Complicated. It's one of the reasons I need the surgery. That, and an actual medical condition." Flynn shot her a confused and concerned look, so she quickly explained. "I have a hormone imbalance. Too much testosterone. Even my body agrees I shouldn't have turned out this way. Doctors noticed the initial warning signs of ovarian cysts during my check-up a few days ago, so they wanted to perform a hysterectomy as soon as possible. I knew I'd have to get one eventually, but I didn't know it would all happen so fast. Usually you have to live as a man for a year before they'll do an operation like that, but since I need one and I've been insisting on being treated as a male at work longer than that, they're making an exception. That's where I'll be in a week. After that, I start hormone therapy."

"More or less. And don't ask why I can't just stay a girl, because like I said, it's complicated." The finality of her voice told Flynn that was the only answer he would get.

"Where did you think it was going to go?"

Tanya tilted her head to one side. "Huh?"

Flynn shrugged. He kept his tone casual but curious. "What was your ideal outcome of us flirting? Be honest."

"Oh ... well ..." Tanya tucked her hair behind her ear as pink rose into her cheeks. "I was ... kinda hoping to ... to ..." She bit her lip and took a deep breath. "Ultimately? In a perfect world? Well, a perfect world where I still have this body. I ... would have liked it to end up at my place, maybe yours, depending on what was closer."

"Wow." Flynn blinked in surprise, but he couldn't keep himself from grinning. He was flattered. "You mean it?"

"I told you, you're my type. I have a bit of a soft spot for redheads."

Flynn beamed. "What a coincidence. I happen to have a soft spot for gi -- partners who have soft spots for redheads."

Tanya giggled. Then her expression snapped back to solemn and she stared down at the rapidly cooling cup in her hands. "But ... since I'm ... well I'm ..."

"You're ... like a walking catfish? 'Hey, I look like a pretty girl, but secretly I'm an old bald guy messing with your head?'" He laughed at his own joke, but Tanya didn't take it as lightly. His stomach turned over in discomfort. "Okay, chalk that up to me having a lame sense of humour. I know that whatever you are, you're no creeper or perv or whatever. To me, you seem like a nice, intelligent, sensible person. And you know what?" She glanced up at him through her eyelashes. "That's my type."

The Claiming of a Virgin King (MM)
April Andrews
In Shelf
$3.99
Tweets by
sirenbookstrand