In 1645, as the English Civil War rages, it's a dangerous time to be a witch. Jessica Jackson is a real time-witch whose familiar and lover, Titus, is a shifter. Borne from a long line of witches stretching back to ancient Lemuria, she can step through the doors of time, using her Grimoire, an ancient book of magic garnered from magicians and witches from many civilizations and times.

In the sleepy Norfolk town of Pendlebury, Jessica settles in as a healer and has a passionate love affair with the schoolmasters' beautiful sister, Constance. Life is good until a witchfinder arrives, determined to hunt down and expose a coven of witches! Jessica has to use her wiles, her wit, and her magic to stay alive. 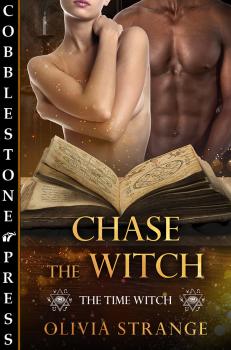 More From The Time Witch

“By the Lord, that hurts! But it feels sooo good. Thrash me again, Mistress Jackson.”

In the light of the guttering candles, Jessica smiled as she raised her gloved hand. She again swept it down to deliver another lash across the small of the man’s bare back and the tops of his buttocks, as he lay upon the large wooden desk in the schoolroom.

He had dismissed the children when the shadow of the sundial had reached four of the clock. He’d closed the shutters and lit the candles. As arranged, she’d come a quarter of an hour later, and he’d admitted her upon hearing her tap on the door. He had then bolted the door before taking off his black jacket, hoisting his starched linen shirt and pulling down his breeches for her to inspect his back. She had brought everything she needed, and with him sprawled over the desk behind which he usually presided over the class, she had flogged him for a full ten minutes.

“It looks good, Master Fairbarn. The whole area is rising nicely. You have a beautiful patchwork of red wheals all over. But just for good measure, I’ll strike you thrice more.” Whack! Whack! Whack! With each blow, he winced, grunted, and thanked her profusely.

“Upon my soul, Jessica, you know how to birch better than I do myself.”

“It is a small skill that I have developed,” she conceded.

He laughed. “Well, there are many boys who would like to trade places with you now, for they have felt my cane upon their behinds for unruly behavior, or for failing to have even the most rudimentary knowledge drummed into their heads. I am sure they would like to administer a flogging to me out of pure revenge.”

“I am sure that your beatings were administered with a good heart, Master Fairbarn, just as mine have been delivered in the hope that we can make your back better.”

He sighed and let his head hang, his long blond hair tumbling over his shoulders. “Yet I would give anything to have Colin Roberts, Simon Quince, and Alan Turner back in my class and causing mischief. Instead, they are to be buried tomorrow.”

“I know, Master Fairbarn. The whole of Pendlebury is saddened that the Lord took those three boys so suddenly. But who are we to question his will?”

“I just feel strangely guilty that I did not realize that they were going to die. I taught all three on Monday, and yet on Tuesday morning they had all died.”

“You must not feel guilt, Master Fairbarn. There was nothing anyone could do.”

“You are right, Jessica, the Lord is answerable to no man. He alone is master of life and death.” He gave a short laugh. “But talking of the word ‘master,’ it would please me if you would call me by my Christian name. It does not seem right to call me Master, especially when you are the one wielding the flail.”

Jessica giggled. “Very well, William!” She stared admiringly at her handiwork. The whole of the skin on his back had risen up with nettle stings from the bunch of nettles that she had been using as a flail. As her gaze fell to the curves of his buttocks, she permitted herself a smile. He has a goodly ass that I would like to fondle and explore further, had I the opportunity. Yet, no sooner had she thought about him carnally, she chided herself. Stop it! I cannot lie with such as he. It has been so long since my cunnie was filled with a prize cock that I am seeing attraction in anything that walks in breeches. Besides, he is the Pendlebury schoolmaster, while his sister Constance is my best friend and fellow quilt-maker. Oh no, I fool myself, for she is much more than just that.

“In truth, it stings like the devil, but it is a better pain by far than that lumbago,” the schoolmaster volunteered. “I have hardly been able to bend or sit down at all. The children have been giggling at me behind their hands, and I have had a hard task to conceal my pain and my anger.” William Fairbarn was thirty years of age and had been the Pendlebury schoolmaster for several years. He rolled off the table and stood up to gingerly feel his back. He twisted to the right and then to the left, before bending forward to touch the floor. “Why, it is almost magic, Jessica. I am glad that Constance arranged for you to call on me. She had told me of your skills in healing, but I did not know how good they really were.”

“I only do it for friends, William. Constance is my friend, so I am happy to help you.” She felt a stirring between her legs and realized that her underwear had already grown moist. Gad, I will have to relieve myself when I get home. How I wish Titus was there.