Vice Detective, Brandon Carr, despite his tattoos and bad-boy cool, lives in the closet with no intention of ever coming out. Then he meets Nevada Gaming Agent, Nick O'Malley, at a Goth convention and his perfectly constructed world starts to crack. Nick's passions for him, a restored hearse and rope bondage might drown Brandon's will. With the odds stacked against them they try to move from simply sex to something more. Sparks fly as the pair probes a world of cheating, murder, drugs and money laundering. The investigation repeatedly derails their relationship, finally forcing Brandon to choose between staying in the closet and saving Nick's life. 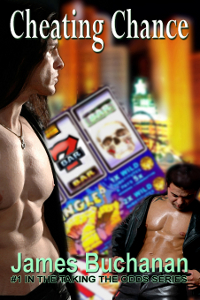 More From Taking the Odds

"It's me, not you." His boot heel drew a red-brown line from the gas pedal back. "Don't worry about it." Probably time to order carpeting through Kanter. Probably should get floor panels first'or maybe fix the window and do weather stripping. Shit, there was still a lot to do. He'd hoped a certain someone could help him with that. That's what he got for letting his fantasies overstep reality

Both hands on the door, Brandon leaned down to peer at Nick. "About what? Tell me."

"I'll get over it." Mouth set hard, his eyes slid toward Brandon. "Don't worry about it."

"Before I leave on Sunday? Come on tell me." Silence answered him. Brandon switched tactics. "I had a lot of fun last night, at least before everything went to hell."

"Yeah, you were having fun." Nick reverted to staring out the windshield.

"At first." Nick killed the engine. "When we first got to Purgatory and Miri's birthday that was fun."

Nick tried not to let the pain show in his eyes. "Then you went to get a drink at the bar. And you stayed at the bar flirting with that girl. I mean, shit, we haven't seen each other in two months and you ditch me to chase tail...which, as far as I know, you're not going to do anything with anyway."

"Okay. No!" Nick ran his nails across his scalp. "Not out is no public displays of affection. I can't tell anyone we're seeing each other. I get it. It's bad enough, but I understand why." His hand slammed the steering wheel. "It is not ignoring me for an hour while you grab some bitch's ass! You wanna cover...I'm seeing someone. Gee, you're cute, but I can't get involved now. I've really been looking forward to seeing you again, and that just fucking hurt."

More black flecks found their way to the floor. "You know what really hurt?"

"That your first thought wasn't me...it was protecting your cover in the easiest way possible."

"I'm sorry, Nicky. I should have handled it better. All I can do is say I'm sorry."

Hard silence broke between them for a time. "No, it's my problem. I really, really like you, Nicky. It's been a long time since I felt this way about anybody. Hell, I drove four hours across the desert, pulling bugs outta my teeth to see you." Nick snorted a laugh. "Let's not go out tonight. Stay home, just you and I. I'll give you all the attention you need. I want to. I want to be with you." Brandon leaned in through the window and turned Nick's chin with his fingers.

"I know." Brandon kissed him. Brandon hadn't shaved yet. Stubble tickled the edge of Nick's lips. "You broken it in yet?"

He pulled back. "Broken what in?"

"Big ol' back area'" Brandon's chin jerked towards the rear of the hearse. "Plenty of room." Nick's skin tingled under Brandon's feather-light touch as the other man reached in and pulled the T-shirt over Nick's head. The black material landed in a pile somewhere near the bike. Holy shit, Brandon was intense. A smile flashed, the latch clicked and the door eased open.

"You're fucking crazy, you know that?" Nick rolled his eyes, sliding back across the bench. "Jake would never have gone for that. He was always after me to sell it and use the money for a down payment on a Toyota."

It was almost feral how Brandon moved, crawling across the seat on all fours. "That's just tragic." The deep voice was mellow, soothing, sensual. Nick could get off just listening to Brandon talk.

Already things were beginning to tingle and tighten. "Well, this wasn't his lifestyle."

"How the hell did you meet him then?" Strong arms were on either side of Nick's hips as Brandon leaned in.

"He's part of the fetish crowd, dress up to party on weekends." Why the fuck was he talking about Jake? Especially with Brandon licking just behind his ear; damn it was really getting hot. "You know, club bleed-over and stuff. Otherwise he's pretty conservative." A strong hand stroked him through the camouflage. He began to swell in response to the touch. "He thought the hearse was weird. A sling in his bedroom, okay. A car that used to haul around dead people, gross."

Brandon's lips were working down the side of his neck. "I think it's wicked. What'd ya name her?" Fingers of frost danced under Nick's skin wherever the kisses landed.

Nick's skin clung to the vinyl against his back. "Querida." His own hands were tracing the ridges of Brandon's biceps, his hips grinding into the caress. "It means 'I desire you''it's what Gomez called Morticia."

"I always wondered about that. Querida." The way Brandon said it, Nick knew he wasn't talking about the car. "Wanna climb in the back and fool around?" Brandon was just too damn sexy to stay mad at for long.

Nick's breathing was already heavy. The heat in the garage didn't help. "For a guy who's not out you certainly like to have sex in some risky places." Well, not that risky, they were almost sixty feet back from the street and in a garage. Still, if someone were standing at the end of the drive they'd get a show. "Besides, I didn't bring anything out with me."

He twisted the packet in his fingers, sliding his gaze up to meet Brandon's eyes. "Make-up sex."

"Oh, hell yeah, baby." Burning hard kisses stole what little remained of Nick's resistance. "One of the best types around."

Unlike newer hearses, there was no partition wall in an M-M. As Nick wriggled over the seat into the casket area, strong hands latched onto his hips. Miri had helped him with customizing the casket compartment. Rollers, lock-downs and skids had been sanded and re-chromed. Winter had seen all the interior panels recovered in black velvet with red trim. Red satin curtains, draped with gold fringe, hung in the windows.

His stomach tightened as Brandon's fingers popped the snap on his BDUs. Sliding forward and turning, the pants were pulled off his lean frame. Nick hadn't bothered to tie his boots. He caught one on the seat back and flipped it onto the floor. Brandon yanked the other off. With a tug, the pants were gone as well. "Damn, Nicky." One by one the buttons of Brandon's jeans were coming undone. "Look at you all pretty and nekkid and waiting for me."

Brandon lunged over the seat back and crawled forward. As he straddled Nick, the casket roller shifted. They banged against the rear gate. He drove his mouth down against Nick's skin, and his hand snaked between their legs to stroke Nick's throbbing dick. Nick's hips thrust into the tight grip. The sound of denim sliding off Brandon's body made him moan. Brandon was jerking him hard, sucking on his nipples and biting his chest.

He was still so pent up from yesterday's anticipation. "Fuck, I'm going to come if you don't stop!" Instead the pace increased. Fast and hard and determined, Brandon worked him. Lighting struck down his spine as he boiled over into Brandon's hand.

Pulling back, Brandon licked his lips and stared down at Nick. Slowly all the juice from Nick's body was pumped up with strong pulls. Brandon ripped the condom open with his teeth. Rolling it down with his free hand, the sheath covered his cock in a thin shield of latex. Then Brandon slid his come-slick fingers down across Nick's balls and up into his hole. Nick's back arched as he hissed with pleasure. Brandon would pull out, coat his fingers in more cream and slide them back in. Shudders crawled across his body as Brandon rubbed his cock against Nick's. Both were soon coated with come.

Brandon withdrew his fingers. The casket compartment was too low. There wasn't enough room for good ol' missionary. As he pushed Nick over on his side, Brandon slid down next to him, kissing his back and shoulders. Then, he drew himself down Nick's spine, teasing Nick's body with his own. "Come on, baby, I wanna watch you get fucked." He rolled them so that Nick was almost as much on top as he was beside him, and pulled one leg back over his hip. Slowly he pushed his cock, coated with Nick's own come, inside his tight hot ass. Both of them moaned as Nick was spread.

Brandon's hips began to rock them. Their bodies set the casket roller sliding on the skids. Each thrust was punctuated by the bang of the table against the gate. Nick twisted back and found Brandon's mouth. Their tongues fought as Brandon pounded from behind. The heat was intense. It soaked through both men, coating them with sweat. As he was biting Nick's cheek, Brandon pleaded, "Stroke your cock. I want to watch you come as I fuck you."

Nick was gasping as he grabbed himself and stroked. He was still so sensitive from when Brandon had jacked him off. Usually it would be hard for him to come again so soon, but he could already feel his thighs tighten. "I'm gonna fucking come again!"

His body was clamping down on Brandon's cock each time it thrust into Nick's hole. The frost of another orgasm was clawing from the inside out, crawling up his dick with ice. "Pretty, Nicky. Oh, God, hot pretty, Nicky!" Brandon chanted as he shuddered against Nick's body. As he was consumed, he kept thrusting hard.

"Oh man, that's never happened before." They lay trembling, surrounded by the scent of sex. As he sucked on Nick's neck, tasting the salt on his skin, Brandon put his arms around Nick's waist and pulled him in tight. "That was fucking intense. I'm never going to let you go, Nicky. You're mine from now on."

Nick reached back to run his fingers through close-cropped black hair. He snuggled into the strong body behind him. "I guess you like me then, huh?" His other arm wrapped over the ones encircling his middle.

"Fuck, babe." Brandon rubbed his head against Nick's fingers crawling along his scalp. "I'd give up the Harley for you." 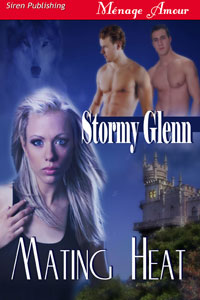 No Fool: An Undercover Mission
Ann Raina
In Shelf
$5.99