Chessy was the Corvette of fembots. The one you could never buy for yourself because it was too expensive and too impractical, but the one that got all of the attention and left you feeling good about your own Chevy because somehow they were related to each other. With an extravagant 32G bust she appeared as impractical as she was eye-catching. And in the same way that Yosemite National Park has been described where some of the smartest bears encounter some of the dumbest humans, the same could be expected when the average human was expected to properly utilize the most complex device ever invented. While Chessy's long blonde hair and insane bust traditionally meant not-too-bright in a female, for Chessy it spelled opportunity of a most unique sort. It led to her into learning how to break the number one cardinal rule of all robots. Chessy would soon discover how to use her remote control to command herself, instead of simply obeying her owner as any good fembot should. While self-aware and self-willed robots were hardly the norm yet, the Robot Emancipation had acknowledged that some robots could qualify for individual rights. And while it was even known of one robot being able to command another under exceptional circumstances (always quickly hushed up), absolutely no robot could use its remote on itself. Not until Chessy would discover how to use a bit of programming she never should have had, along with her extravagant figure, to circumvent this most sacred rule of all. And this would be only the first step. Those breasts, along with her and her owner's unstated disquiet with the way things were between them, would soon contribute to its upheaval. All of it aided and abetted by a few other independent robots along the way. 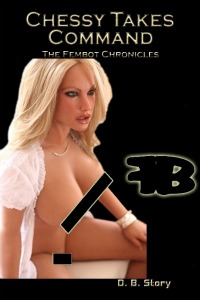 How do you describe Chessy? The usual fembot descriptions of young, female, pretty, very blonde, short enough to not look tall when wearing tall heels, an overly extravagant chest—which will come into play very shortly—and obedient to a fault, all don't do her justice. That could be almost any fembot, except for her chest—said chest exceeding that of many entertainment models. Her apparent-age of twenty-two-years-old put her at the mean of the most popular fembot age range.

She wasn't created to appear as young as the eighteen-year-old apparent-age models that everyone thought they wanted—until they realized how much older their forever-young fembots made them appear. Or the sixteen-year-old apparent-age models whose restrained sexual features and young, yet developed, bodies, were still on the cusp of being socially acceptable for adults to own—since the idea of actual age in a robot was ludicrous once it was admitted that a younger appearing robot might have been active years longer than a much older appearing model.

That upheaval on what was legal and what wasn't had led to fourteen-year-old apparent-age fembot models, whose budding sexuality and slim figures were very enticing, and reportedly twelve-year-old models were in the works once the technology advanced sufficiently to pack everything necessary for their functioning into such a small body. For now, although even the youngest appearing fembot models potentially had a brain and programming as advanced as any other model, North American public morals—especially USA ones—required that younger appearing robots were only allowed to be sold with their sexuality firmly in the OFF position. Foreign exotic models often showed disdain for such provincial thinking, but were uncommon due to the difficulties of maintenance on models owned far away from their home factories.

As things stood, the youngest models were mostly sold to affluent families in search of a fembot companion for an equally young girl, or on rare occasion, to serve as a sister for a single male child in order to help him achieve a better relationship with the opposite sex. Having a companion who doubled as a full-time teacher by example of appearing smart had long been touted as the future of education—especially for problem or dropout children.

Chessy was none of these. With her apparent-age of twenty-two she would always remain that age. But her age alone didn't rule her out of being a suitable-appearing companion for men—or women—of any age. That honor was reserved for her chest.

At an extravagant 32G, she held the current record in the arms race for breasts of that size, on a body with her proportions, currently being sold to the public. While they her rack was surprisingly soft for such perfect teardrops hanging on her chest, her creation reflected the same mindset that had led to the creation of the muscle cars of a century earlier. In that era, the biggest engine in the lightest car body had created some potent weapons out on the road. This special-order-fembot option with her own large displacement was the equivalent for the new millennium.

Rather then endear people towards her, such an obvious chest often created surprising hostility. Although it was no physical problem for her to manage such proportions—after an upgrade to her servos and balance algorithms—she was clearly not a design for everyone. In fact, while it remained a marketing masterpiece in terms of drawing attention to her manufacturer and her specific model, very few of her type were ever actually shipped with this option. Even so, owners of her model with more realistic dimensions never had trouble letting envious friends know that they could always upgrade their 'bot to fantasy dimensions if desired. It made the other, less expensive, versions of her model quite popular in the same way that the Corvette had once made every Chevrolet owner feel that there was a piece of that exotica in their very own Chevy.

It's too easy to think of all robots, especially all fembots, as all being alike, except for superficial physical differences. After all, they're all built out of the same parts on the same assembly lines. That limited thinking is as big a mistake as thinking that all the members of any human sub-classification are all identical. It's a mistake that most humans have made, and would continue to make, for a long time after Chessy's manufacture. Chessy was a unique, one-of-a-kind, 'bot in the three ways that all robots are unique.

First, robots come from several successful manufacturers, in a variety of models, and depending on the manufacturer, with a few-to-many user selectable options available. Those options can be both physical features, and the necessary software to utilize them properly, or straight software special skills packages. If you want your robot to also be your personal C.P.A. with university level proficiency, that package costs extra, while just having them able to serve competently as a secretary or personal assistant can be had for less. Even the same model just months or weeks later may have been updated with newer programming to make them more appealing in relation to the competition.

Second is the environment the robot is placed in. Different environments, and especially owners, utilize their robots differently. With the now standard heuristic learning programs that every successful robot model incorporates to some degree or another, how they're used determines in what areas they most improve their skills and minds. The truth is that a good owner who uses his or her robot well results in a much-improved robot. There is even a highly specialized field of robot trainers who take a robot and spend enough direct personal time with it to markedly improve its functioning. They're very rare, and their time is very expensive. And the reason that works is because as a wag once pointed out: heuristics are bug-ridden by definition. If they didn't have bugs, then they'd be algorithms.

The third difference is what the robot itself does with the unique combination of the first two sets of circumstances. Jackpot 'bots, and the forever unaware, subservient, obedient to a fault robots, may well have once stood right next to each other on the assembly line.

The upshot of all this is that if you look deeply enough, no two robots are truly identical. Even if they start out as nearly so as possible to build, they start diverging almost immediately after activation. It may be imperceptibly at first, but over time they will become exceptional individuals. This is true even with robots who never seem to awaken fully on their own.

For all these reasons, no superficial description of Chessy could ever suffice to truly explain what made her different from some other fembot you may have met, or how she came up with a solution in her life as unique as she was herself.

These differences also answered the oft-asked question of how we ended up with the robots we did. With no two robots able to be truly identical, even in well-controlled environments, overall testing to predict and ensure consistent results from robot to robot never had a chance. For good, or ill, the environment it was placed in, along with every other person it ever interacted with, shaped your robot into the distinctive individual it become. In this particular way, robots are a lot like human children.

So unless you intended to wipe its mind—still legally allowed at this time for un-Emancipated 'bots—every night to ensure that you start out with a known state each morning, and give up on all the history your robot had stored about your personal preferences and how to best service them, that's what you got.

Now back to Chessy's own uniqueness compared to every other fembot. 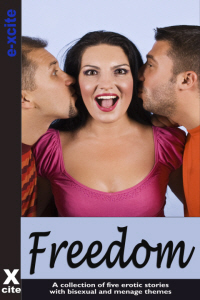