Children Of The Vampire King

The graveyard shift at the Night and Day truck stop used to be quiet and uneventful, until a group of attractive drifters show up one evening. When the group decide to extend their stay, the staff soon discover that they are not dealing with ordinary customers. These drifters haven't been human for a very long time. As the weeks pass and the body count rises, the staff at the truck stop realize that if they don't soon put a stop to the antics of this group of sadistic killers, they will feature as the main course on the vampires' menu. The question is: how? 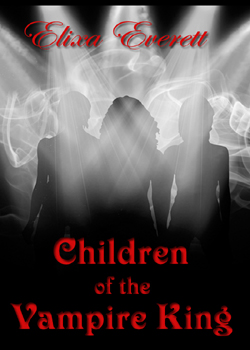 Children Of The Vampire King

Julie's hand shook slightly as she closed the cash drawer and handed the burly, fifty-something, silver-haired trucker his change. He was a regular, she was pretty sure his name was Will, but wouldn't have bet money on it.

The trucker looked up her at her with mild concern flashing in his eyes. "You okay, miss?"

Julie nodded. Get out of here, get out of here fast! She never spoke the words out loud. Would never dare. They would be at the Night and Day truck stop soon. Just because she couldn't see them didn't mean they couldn't see or hear her. A chill ran down her spine. It felt as though they had eyes and ears everywhere. She looked out of the large front window and into the parking lot. The shadows deepened. The sun had almost completely dipped behind the mountain. The only telltale signs of daylight were the streaks of red and orange that filled the near-night sky.

Will nodded. "See you next week, girlie," he waved the two scratch lottery tickets at her as he turned. "Maybe I'll get lucky."

Julie watched him as he strolled out of the store and headed for his big rig. "You have no idea how lucky you already are, mister," she muttered under her breath.

"Have you seen them yet?" A soft female voice came from the direction of the restaurant. It was Sandy, the waitress at the adjoining eatery. There were three people who worked overnights at the Night and Day truck stop: Sandy the waitress, Ricardo the overnight restaurant chef and herself. They worked every single graveyard shift, seven days a week. They hadn't had a day off in over three months. Not since they first appeared. Not that they didn't want time off. Hell, they all would have loved to up and quit, move out of the state of Maryland and never look back. They'd push the nightmare they'd been living far out of their minds.

They literally couldn't. The vampires had a hold on all three of them. Regardless of what was going on in their lives, regardless of how physically ill they may be; all three were compelled to be there.

Looking at Sandy, Julie recalled an incident several weeks ago. Sandy had been so sick that she had been admitted into the hospital. However, when eight o'clock came around she was standing in the restaurant in full uniform, gripping the counter for support. It had been heartbreaking for Julie to watch.

The vampires had laughed. They had great fun watching her struggle. Sandy had dropped a full tray of dirty dishes due to being overtaken by a bout of projectile vomiting. This had reduced the four of them to hysterics. Tears had actually formed in their cold, sadistic, red eyes, they had laughed so hard.

"No hun, I haven't," Julie replied with a wry smile.

The only male of the vampire group went by the name of Sebastian. He had taken a liking to Sandy straight away, though Julie was unsure if liking was the best word to describe it. It might be more accurately referred to as an obsessive, sexual infatuation.

Julie could understand the reason for his attraction to Sandy. He and every other male that came into the place had the same reaction to her. Sandy was a petite blond girl of twenty. She had the prettiest deep blue eyes Julie had ever seen. Guess that goes to show, human or vampire, a man is a man when it comes to some things, Julie mused.

Sandy sighed and nodded, a touch of a smile lit her face, "Maybe they won't show up tonight?" Sandy's hopeful expression was short-lived.

"Speak and you shall receive," Julie stated. Will's red International big rig passed by her vision to reveal the first of the four vampires clearing the woods and proceeding to stroll across the I-95 heading in the direction of the truck stop. Sandy followed Julie's gaze and also spotted the first of the four vampires. With a gasp she scurried back over to the restaurant. It was her attempt to put off the inevitable. It was useless for her to run and hide, Sebastian would find her regardless of where she scampered off to.

The first vampire to clear the woods went by the name of Tabitha. To all intents and purposes she was the leader of the group. She was a tall woman, with chocolate brown skin and dark eyes. She was wearing her normal attire of ripped low rise blue jeans and a tight black tank top. The wind blew her shoulder length curly brown locks around her face wildly. She was easily the most physically stunning, but also the most cunning of the four.

Next to clear the woods was Sebastian. He was the sole male and looked as handsome as sin, with short blond disheveled hair and forest green eyes. If Julie could get past her intense hatred of him she might have found him attractive. He walked closely behind Tabitha, looking tall and powerful as he strutted across the highway. His attitude gave the impression that he owned the world. In his mind, perhaps he did.

The third to come into view was Chyna, not her real name, but the name Tabitha had decided to call her. Tabitha either didn't care for, or couldn't pronounce Chyna’s real name. From Julie's limited knowledge, Chyna had joined the group a few years back. She had been a university student at some prestigious university on the east coast. She had been sent to the United States by her parents in China who had wanted the best for their little girl. Apparently, she had quite a promising future ahead of her. Had, being the operative word.

From what Julie knew of her story, Chyna and a group of her college friends had been camping at a little site in the northern part of Maine, when Tabitha and Sebastian had come across their group. The vampires killed her six companions, bleeding them down to their last drop, but spared her.

Tabitha evidently thought Chyna would make a stunning immortal, an opinion with which Julie tended to agree. With her long raven black hair cascading down her back, dark, mysterious black eyes, and slender figure, Chyna was stunning to say the least. She followed the other two with elegance and grace, the skirt of her yellow sundress blew fiercely around her thighs as she walked. She almost always wore sundresses.

Finally, there was Veronica, the newest member of Tabitha's entourage. If Julie could find sympathy in her heart for any of the vampires then it would be for her. Julie had been there the night they had turned Veronica. She had watched the transformation happen, right there in the middle of the truck stop parking lot, just a few weeks ago. Veronica was the poster girl for the phrase wrong place, wrong time as far as Julie was concerned.

She remembered that day vividly...