Christmas with the Stallions (MMF)

As horses, the Stallions are beauty in motion. As men, they're sex in a saddle. This Christmas, Haley McIntire enjoys both man and beast.

Faced with a large working ranch she can't manage on her own, Haley hires two studs to help her through the holiday season, but she gets more than she bargained for with Colt and Seth.

The sexy duo is working for one purpose, to capture Haley's heart and claim her as their human mate before Christmas morning. Shifting into domineering, gorgeous stallions, the men taunt Haley like she's their prey, until she finally discovers the truth and embraces the love she's destined to enjoy.

"I love writing in the paranormal genre, and horses are one of my favorite shifters. I hope you enjoy the men and horses found in Christmas with the Stallions. The beautiful creatures found in this novella are my Christmas gift to you." ~ Addison Avery ~

Christmas with the Stallions (MMF)

Heat Rating: Scorching
Word Count: 16,230
96 Ratings (3.4)
Menage a Trois/Quatre Shape-shifter
In Bookshelf
In Cart
In Wish List
Available formats
Mobi
PDF
HTML
ePub
Cover Art by Jinger Heaston
Reviews
Didn't care for this story. There was no character development and there was no relationship between the main characters. The shifting aspect was very weak.
verity
Read more...
Professional Reviews

5 HEARTS: "This was the first time I had ever read a ménage story (al la shifter-style) that I felt was in any way written seriously. For the first time, I found myself truly enjoying this type of a story. This was, and is, entirely due to the way the author wrote this story. Not only did I completely love "Christmas with the Stallions", I will definitely be recommending it to my friends and family. Christmas with the Stallions will be put permanently into my "to be read" file." -- Alyna Couture, The Romance Studio

“I’ll be right there,” Seth called out. He turned his face toward the wind and, tilting his chin upward, his nostrils flared. He immediately wheeled around on his boots, staring at Haley with pure lust in his eyes.

“You know what?” she demanded as Colt turned the doorknob.

“Christmas Eve is tomorrow,” he said, walking through her hallway.

“So what, it’s Christmas Eve? I can’t fire you the day before?”

“You’re not firing us,” he reminded gently. “And we’ve already been over this. I guess you liked the idea of being strapped to a bed for long and indulgent hours of foreplay.”

She slid down his body as if he orchestrated the exact way he wanted to let her go. Smiling, he said, “Nice.”

The audacity! She should’ve slapped the cocky expression right off his smug cheeks. Instead, she found herself speechless as she watched him bend over and light the gas logs in the fireplace. The one mention of foreplay spiked her interest in a way she should’ve never allowed.

When he stood again, he pulled the curtains back. The large picture window overlooked the lower field. There, in the paddock, the beautiful palomino ran from one gate to the next. He reared high, kicking out his front legs as if the world angered him.

She watched in awe as the horse acted out on some kind of tantrum. “Where did you say that palomino came from?”

Colt didn’t answer her. Instead, he shrugged out of his coat and leaned in behind the massive Christmas tree and plugged in the Christmas lights.

“The horse, Colt?” she asked, halfway turning her head to glance at him but unable to look away from the beautiful golden stallion as his erect penis dropped and he stamped at the dusty ground beneath him.

She turned around and said, “Where are the mares?” Then, his response hit her square in the face. “What did you say about Seth?”

Kissing Seth was like kissing an angel with broken wings. His gaze held hers while their mouths opened and closed, accepted and gave licks and nips, tongues dueling for the right to lead. Then, he turned into the aggressor, yanking her closer, and nuzzling her with ferocious passion guiding him down her belly, up to her breasts, over to her ear, down her side, and finally straight into the core of her sex.

His tongue thrust inside her hot walls and she arched for him as he pulled her forward, his hands clasping her bottom and raising her to him. He licked her folds and then sipped her moisture, pressing his tongue forward and lapping at her like he planned to eat her alive.

“Come for me,” he mumbled against her mound, nuzzling her flesh and inhaling her scent. “Let me drink you in, darlin’.”

So engulfed in her own lust, she didn’t see Colt approach but she sensed him there. With the back of her hand pressed against her mouth, she braced for the orgasm and arched forward. Keeping her eyes closed, she waited for his first touch, the feel of Colt’s hands roaming over her.

Seth should’ve been licensed to waggle his tongue inside a woman’s pussy. Good heavens, he called out the heat, the kind of climax a woman couldn’t take over and over again because multiples would’ve damn near killed her.

Suddenly, as if things changed for him, he braced himself over her. His palms were on either side of her head and his cock pressed at her folds.

Seth winked. “It works out great for all of us this way,” he explained.

Colt stared at her then, looking over Seth’s shoulder as he positioned Seth’s ass in front of his cock. “Stallions are highly sexual, Haley. We’re close to our mates, male and female.”

Spreading her legs, she fingered her clit, rolling the little button back and forth, waiting for Colt to take Seth and encouraging Seth to succumb to the lust building between them.

The sweet tip of his head swelled beyond her pussy lips and he pushed inside her walls. “Hell, woman, don’t touch what belongs to me.”

He reached under her and fingered her ass as he stroked her vagina. Colt sank in behind Seth and she felt the impalement point. The sharing soon jolted her into a new awareness. Their bodies rocked together. Seth released one guttural sound after the next and she watched his varied expressions—the evidence of pain and pleasure rocking him when Colt’s pace increased.

“That’s it, sugar,” Colt said. “Work those thighs, honey.” His gaze drifted down to Seth’s ass and he suddenly changed his tempo, thrusting hard and staying put for a second before he reared back and forth in an intense swaying move.

“Now,” he said through clenched teeth.

She worked her legs, rolling her hips forward and back, taking the gifts Seth’s cock gave as he divided her legs more, plunging inside and going as far as her body allowed. “Yes!” she exclaimed. “Oh yes, right there. Fuck me harder, Seth. Go deeper. Ah…God yes!” 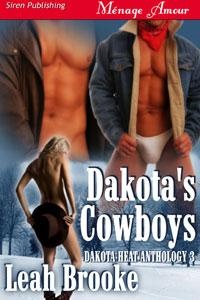 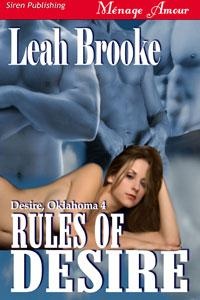 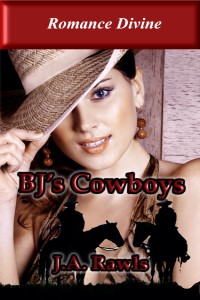 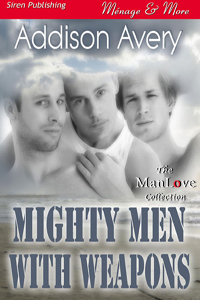 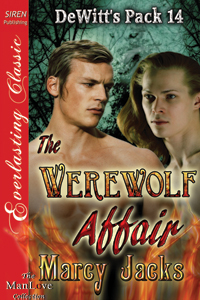