Relationship. They didn’t have a relationship, did they? Craig had basically taken over her life, doing all the things she couldn’t cope with while she was healing. But if he wanted more, she was willing to explore the possibilities. He was sexy, funny, and great to be with, warm and loving. Everything she was looking for. What would it hurt to stay and see what happened? If things didn’t work out, she still had the option of moving.

“Yes, I like that idea. I think we could make that work.” She smiled at him. He was so sexy, tall, and husky with dark blond hair and twinkling hazel eyes.

“Rachel, I’ve waited a long time for you to be ready for this,” he said, taking her into his arms. Leaning down, he gently brushed her lips with his, running his tongue over and over her lips until she opened for him. He broke the kiss and turned her towards the bedroom. “You need to get ready for work, we’ll talk more about this tonight. Today’s your last session with Tina. I’ll pick you up after. When you’re ready, let me know, and I’ll take you to work.”

He’d been waiting for her to be ready for more. Before the incident, they had played a few times, and he had thought about making it more serious, but hadn’t done anything. He wasn’t going to lose this opportunity or her. This time he was going to make sure everything went right.

He took her to work, then came home and called Tina. He wanted to talk to Tina for a few minutes without Rachel present to make sure he wasn’t rushing things and see what she thought of his plan to bring Rachel back into the club. She was in the club every night, watching him at the bar, but she never played and he wanted to play. He hadn’t played since she was hurt, and he was ready.

Tina made time for him before Rachel’s session and agreed with his plan. Rachel was surprised to see he was there when she arrived and even more surprised when he joined them for the first part of her time.

After they discussed what he wanted to talk about, Craig left them and went to the waiting room to let Rachel have some private time with Tina.

As soon as the door shut behind him, Tina asked, “So what do you think about what Craig proposed?”

“I’m not sure. I think I’m ready, but I don’t know what will trigger me,” Rachel answered quietly.

“Unfortunately, I can’t answer that for you. Just remember to take it slow and try not to be afraid. Remember this is Craig and all he’s done for you and how he’s been there for you. If it becomes too much, stop, and if you need to, either one of you can call me, day or night. I’m always here for you, and you both have my cell number.” They talked for a while longer, then Tina walked Rachel to the door and hugged her good-bye, reminding her to call if she needed her.

Instead of taking them home, Craig took Rachel out for a nice dinner to celebrate and so they could talk. They enjoyed their dinner and were having dessert and coffee when Craig looked at Rachel and said, “I want you.”

Rachel had just put a forkful of cheesecake in her mouth and almost choked. Swallowing, she took a quick drink of coffee to stall for a second and looked into his eyes. She could see the lust and need there. “You do?” was all she could say.

“Yes, I do. I’ve wanted you since the first time I saw you, and I’ll do whatever you need to have you,” he answered back, his voice dripping with lust.

Rachel relaxed in Craig’s arms and let him undress her. With each piece of clothing he removed, he kissed and licked the parts of her body he revealed. As he took her shirt off, he kissed and licked his way down her arms, stopping briefly to take a small bite at the inside of her elbow and then sucking each finger into his mouth. Taking her other hand, he worked his way up that arm to her collar bone. He pulled her bra strap down and revealed the top of her breasts, licking and kissing them both. Reaching around her, he unfastened her bra and let it fall to her hands.

Looking into her face, he pulled the bra from her fingertips and threw it across the room. “Beautiful, you are so fucking beautiful,” he said with lust in his voice. Still watching her face, he took his hands and palmed each breast, rubbing her nipples with the center of his palms.

Her knees buckled, and she would have fallen had he not caught her and pulled her into his lap. “Okay, darling?” he asked quietly, cradling her in his arms.

“Better than okay,” she answered, reaching and unbuttoning his shirt, wanting skin-to-skin contact. She ran her hands slowly over him, feeling the light dusting of hair on his chest and finding his hard little nipples.

Leaning down, she had to taste, licking his shoulder as she pushed the shirt down his arms. Rubbing her face over his chest, she found a nipple and licked, taking a small bite and sucking.

Not wanting his other nipple to feel neglected, she gave it the same treatment, licking her way between the two, nipping and sucking until she felt him shudder.

He held her and let her explore, letting her take this at her pace, enjoying her touch.

“Touch me, Craig. I need your hands on my body. Make me yours, make me forget,” she said as she threaded her hands in his hair and pulled his head down for a kiss.

“Are you sure you’re ready, because once I get started, I’m not going to stop,” he told her quietly. He wasn’t sure he could quit now if she asked him to.

“I’m sure. I’ve wanted you for a long time. I miss the scenes we used to do at the club, but I need to work up to that slowly. Please be patient with me, but I also need you.”

“Oh sweetheart, I’m going to take you to the moon and back if you let me. Just sit back and enjoy the ride. Remember I’ll never do anything to hurt you, and if you get scared or need to slow down, just tell me,” he told her as he turned and laid her in the middle of the bed.

Taking her hands, he raised them to the headboard and said, “Hold on to this, and don’t move your hands. I’m not going to restrain you, but I do want you to hold on. Do you think you can do that?”

He moved over her, straddling a leg on either side of her hips and leaned down, taking her mouth for another kiss. Licking and sucking his way down, he took one breast in his mouth, suckling. “You taste so fucking good,” he said as he moved towards the other breast. “I can’t wait to taste your pussy. Do you want my mouth on you?”

“Oh God, anything, just please…” Rachel whispered. The feel of his mouth on her was so incredible, she couldn’t stand much more. It was so good, she was about to come just from the attention to her breasts. He hadn’t even touched her pussy yet.

He licked, sucked, and nuzzled his way down to her pussy, his mouth following his roving hands. Reaching down, he rubbed her mound and slipping a finger in her folds, finding her covered with her juices, dripping for him.

“I’m going to taste you soon. You are so wet,” he told her, stroking her pussy.

He gently brushed one finger over her, barely touching.

Applying more gentle pressure, he touched her over and over, not giving her enough to come. 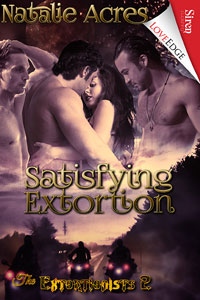 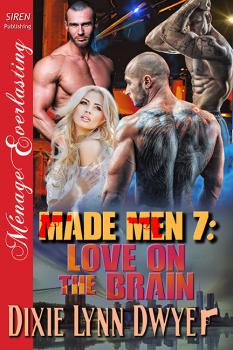