Sequel to Darryl in Distress

Eighteen years ago, Cole’s bigot father kicked him out of their Texas ranch for being gay, threatening to shoot him if he ever came back. Fortunately, Cole made his way north to the gay-friendly Seyda Ranch in Wyoming, where he eventually met Daniel. For the past six years, the two have been in a happy relationship with barely any contact with Cole’s family.

That is, until Cole’s father dies.

Though Cole won’t shed a single tear over his father’s passing, his siblings and their families invite him to the funeral so they can all be together for the first time in nearly two decades. With encouragement and support from Daniel, Cole accepts. The pair travel to the funeral together, but will Cole be able to face his past and move beyond the pain he left behind? 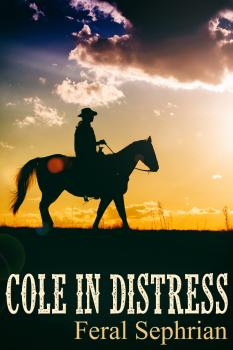 Daniel nodded. "Understandable." He leaned forward and tapped his shoulder. Cole obligingly started rubbing them. "Nnfff, I do love how your hands always know what to do."

Cole sighed. "Yeah, now if only the rest of me would follow suit."

"Don't think about that, if you are thinking about what I think you're thinking about. Your siblings will most likely step forward and absorb all the comments of 'I'm sorry for your loss,' and 'You must be devastated,' and that kind of stuff. Besi -- Guh, move your right thumb over just -- Yes, thank you. Ahem, and besides, I'm sure everyone will have enough tact not to bother you at your own dad's funeral, regardless of how shitty he was to you."

"Eh, you'd be surprised. Small towns like this where the gossip dries up pretty fast, some people will do anything so they can have a juicy tidbit to lord over everyone else. After all, I'm practically the prodigal son returning after eighteen years, 'cept no one here would bother to slay a fatted calf for me. Most of 'em wouldn't even give up a handful of hog feed to celebrate my return. Nah, they'll come up, ask me where I've been, what I was doing there, who is this guy you brought with you, yadda yadda yadda." Cole groaned, taking out some of his frustration on a knot in Daniel's back. "I'll be the topic of conversation for weeks until they find something else to talk about."

Daniel put his hand on Cole's knee. "Don't worry, I'll be there to protect you."

Cole snorted softly. Daniel wasn't exactly the most imposing guy. He wasn't skin and bones, though he was the type of person Cole's grandma would have invited over for dinner every night to feed him steak with vegetables and a heaping helping of apple pie so he'd bulk up a bit. He certainly didn't look like he'd win any bar fights, though that was also because he had the sort of face that people liked right away -- or at least Cole liked it right away -- and wouldn't want to pick a fight with him in the first place. Cole hoped that would be enough to dissuade people from being total assholes to them.

After a few more minutes of classical music and massaging, Daniel sighed. "Great, now I'm hard, too. But you're right, not the time or place for it."

"When we get home," Cole promised.

"Oh yeah? What about when we get home?"

This led to the two of them going back and forth listing the things they would do to each other when they were back in their own house. It started off sexy, but gradually they tried to top each other with humor instead of sensuality. What was initially stuff along the lines of "When we get home I'll drop to my knees so hard and fast it breaks the floor," and "When we get home I'm gonna ride you like a rodeo bull," became more like "When we get home I'm gonna cover myself in peanut butter and wrestle you on the dinner table," and "When we get home I'm gonna sit on the roof and howl about how much I love you." Cole was eventually laughing too much to continue, particularly after Daniel started using an absurd French accent and told him, "When we get 'ome, I am going to put on a flowery bonnet and skip through ze fields like a majestic squirrel so you can chase me." The fact that Daniel has trouble pronouncing the word "squirrel" with a French accent made it all the more ridiculous, to the point where Cole was slouched forward on Daniel's back gasping for air between giggles.

Daniel tilted his head back to kiss whatever part of Cole he could reach, which turned out to be a spot above Cole's left eye. "When we get home," he said in his normal voice, "we're gonna be just fine, right?"

Cole looked into the soulful blue eyes of the man he loved. "Yeah, like we always are," he promised.