In the near future, a deadly flu-like virus decimates the Earth's population. The few who remain struggle to survive without electricity, fresh food, or any other amenities they once took for granted.

John “Court” Courtland and his best friend Ronnie Densch are two such survivors. Court has never known a time when Ronnie wasn't in his life. They grew up together. But it's only as they begin to move forward in the post-apocalyptic chaos of Virginia that Court realizes he's in love with Ronnie. Always has been, and always will be, even if he never lets himself admit it out loud.

Ronnie is a private, inscrutable man who lets no one close to him except Court. With winter coming on, Ronnie wants to move farther south to warmer weather, and Court follows without question. Along the way, they're joined by other survivors, a ragtag bunch all looking for guidance. As they travel, they hear faint radio signals from Fort Sumter, South Carolina, where a rebuild effort is underway.

The world Court once knew has changed, leaving behind a dangerous and lawless landscape. But come whatever storms, he knows he can weather them with Ronnie by his side. Will Sumter turn out to be everything Court hopes for and more? And will he find the courage to tell Ronnie how he really feels before it’s too late? 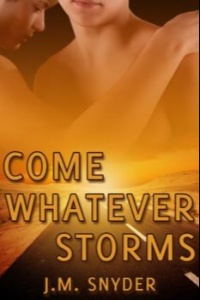 “I never asked to be in charge.” Ronnie scrubbed at the gun barrel now, no longer careful and tender but furious. “I didn’t ask for any of this, you know? At first it was just you and me, and then we picked up Adam, and then Bree, and then this one, and then that one ...”

“I know.” Court kept his voice calm, hoping it would entice Ronnie to lower his. With a grin, he joked, “I don’t even know half those people out there, do you? I mean, where’d the hell they come from? Why follow us?”

Ronnie nodded, and Court sensed the fight leaving him as quickly as it had kicked up. “Exactly. Like we know what the fuck we’re doing.”

“You fake it well,” Court teased, laying his head in the crook of his arm to grin at his friend. “You act like you know what you’re doing so everyone just falls in line behind you. That, or they just like watching your ass in those jeans when you walk.”

Ronnie grunted. “Yeah, well, that might be your reason, but I doubt it works for everyone.”

Something tingled along Court’s spine -- anxious anticipation? Lust? He didn’t know, and it was gone before he could bother to identify it. At least Ronnie’s anger had dissipated. Court could always seem to diffuse his friend. “It might work for Bree,” he said with a shrug. “Adam, I’m not so sure. Maybe that Dizzy fellow ...”

“Bree’s too busy watching your ass to look at mine,” Ronnie countered. “You should show her that box of condoms you found. See what happens.”

Court grinned. “How do you know about those? Did you go through my pockets?”

“I’ll go through your pockets,” Court threatened. Ronnie just shrugged, and Court climbed out of his sleeping bag and over Ronnie’s to reach the pair of jeans folded behind his friend. “What do you have in these, hmm?”

Ronnie stretched an arm under Court’s stomach to pull him back. “Don’t --”

“Too late.” Court sat back on his legs, Ronnie’s jeans in his hands. When Ronnie lunged for them, Court held them out of reach. One hand dipped into the front pocket like a magician looking to pull a trick out of his hat. “Let’s see.”

The first pocket held a tube of Chapstick, a wadded up tissue, and a handful of pennies. “What do you need these for?” Court asked as they clinked together in his palm.

“Put them back.” Ronnie set aside his disassembled gun and reached for his jeans again. “Come on, stop it.”

Court scooted back, his hand already reaching into the other pocket. “What’s in here? More change ...”

But no, it wasn’t coins he extracted -- it was a pair of rings Court would recognize anywhere. Solid gold wedding rings. He’d been with Ronnie when they bought four of them. One set for him and Jeanie, one for Ronnie and Melissa. As far as he knew, both their wives had worn the rings to the grave.

These rings were the men’s bands, plain and unburnished, nothing fancy. The last time Court had seen his was when he tucked it into his dead wife’s hand. He didn’t remember exactly when Ronnie had stopped wearing the other -- when Melissa died? No, that wouldn’t be right ... he could recall a moment when the two of them had been sitting in his living room, Jeanie cleaning up in the kitchen after dinner, and Ronnie’s hand had rested beside Court’s on the seat of the couch. The ring had been there then, and Melissa had already been gone for a good nine or ten months at that point.

Court remembered the scene because he had covered Ronnie’s hand with his so the rings clinked together, as they did now in Court’s palm. “The rings match,” he’d joked at the time. “We could be married to each other.”

Now he looked at the rings, then raised his gaze to meet Ronnie’s. Steady, unflinching. No apologies in those dark eyes, no shame. Had he pried this ring from Jeanie’s grip? Had it fallen while he carried her from the bedroom and he went back to pick it up after the burial? Why keep it all this time?

Gently, Ronnie said, “Put those back.”

Because Court didn’t know exactly what he wanted to ask about them -- or rather, he didn’t know if he wanted to hear Ronnie’s answer -- he tucked the rings into the front pocket of Ronnie’s jeans and handed the pair of pants back to his friend.

The silence between them stretched until it was almost unbearable. When Court couldn’t stand it any longer, he said, “You really should throw those pennies away. I mean, they were already sort of useless before the virus came along. Even if we do bring back money, nobody’s going to want them.”

“They’re a piece of our past,” Ronnie explained. “No matter what happens here on out, I don’t want to lose that.”

Court wondered if maybe that also answered the question he couldn’t ask.