Fate Doherty, marketing director of Detroit's second largest dating service, is on top of her game—until longtime rival and sexy bad-boy, Gabe Ryan makes a play for her job. What's worse, he seems hell-bent on rekindling the old flame she thought she'd smothered years ago... Now, thanks to Gabe’s mission—which seems to have nothing to do with the position they are fighting for—they may both end up in a compromising position...or two. 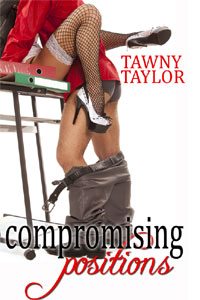 5 ribbons
"...grabs you from the first line and stays with you after the last page is read. This was my first TAWNY TAYLOR book, but it definitely won't be my last."
~Cindy, The Romance Junkies

“And you’re one hell of a smooth talker, Gabe.”

He grinned. “Actually, if you knew me better, you’d know I’m a straight shooter.”

She didn’t want to go there. For some reason talking about shooting anything left her head spinning. “I need to go to the bathroom.” She grabbed her purse, scooted to the end of the bench, and stood, but immediately dropped back down.

The world was rocking under her feet like a moonwalk.

Guess I’ve had more beer than I thought, and how the hell had that happened?

“Are you all right?” Gabe was right next to her again.

“I’m fine. Just got a bad start the first time. I’ll try again.” She stood, and the world dipped and tipped. Her head swam. Two beers did that to her? Sheesh!

On legs that felt like they were tied to anchors, she slowly propelled herself through the crushing crowd to the bathroom. And after peeing a gallon, she checked herself in the mirror—not a pretty sight—and headed back to tell Gabe she needed to call it a night.

When she returned to the table, Gabe stood. “Ready to go?” he asked, car keys in hand.

“He left. Had a personal issue to deal with. Said he’d see you tomorrow.” Gabe took her hand.

She sort of leaned into him as she walked. He didn’t sway like the rest of the world did.

When she got to her car, she fished through her purse for her keys. When she hit the bottom, and still no keys, a tide of panic rose up her throat. “My keys! I must have lost them in the bathroom.”

“I’ll find them later. Why don’t you let me drive you home?”

“No, all I need to do is go back inside.” She took a step back toward the entry, but something caught her by the waist. “What the hell?” She looked down. Hands. She glanced over her shoulder. “Would you let me go?”

He spun her around until she was facing him directly.

Not a good position. He was so close. He smelled so good. He towered at least a head taller than her. Perfect height. Perfect width. Solid. Hard. Sexy...

He leaned down and dropped a kiss on her nose. “You’re a very important part of the new Single Temptation. I couldn’t let anything happen to you, now, could I?”

“So, let’s go to my car, and I’ll drive you home.” He didn’t remove his hands from her waist.

“You’re driving me home for the sake of the company?”

“Partly...” He glanced over her shoulder and smiled. “Okay, I confess. I’m worried about you for personal reasons. Don’t you feel it, Fate? That old magic?”

His handsome face screwed into the picture of confusion. “Really?”

Actually, what she felt right now went way beyond what she’d felt in college. Had to be the Oregon lager. Probably had twice the alcohol content. “We have to work together, at least for the time being. We’d better keep things professional...” Her gaze dropped to his lips as he licked them, and she felt her own go Sahara Desert dry.

He leaned closer, and her eyelids fell closed.

His mouth touched hers, and an A-bomb exploded in her body. Shockwaves pulsed outward to her limbs and knocked her brain loose from its connections.

She wrapped her arms around his neck and held on for life, relishing the lazy, deliberate exploration Gabe was performing on her mouth. His fingers kneaded her waist then tiptoed up her sides. Hers tangled in silky curls at his nape.

By God, she’d lost her mind!

Breaking Away (MF)
Grae McTavish
In Shelf
$1.99
Tweets by
sirenbookstrand