Once a year, for one magical night, they come. They take. They dominate. And then they return to their world behind the glass. Warriors from another dimension, seeking relief from their carnal hunger. But when the time is right, they must help their hostess accept her true mate, the one man who will make her whole.

Skylar Morissey is perfectly content to have her once-a-year carnal visit from her dominant warriors. She can have twenty-four glorious hours of no-strings, kinky sex with not one but two gorgeous hunks. She has her reasons for not getting into anything too complicated, very compelling ones. Until her very real neighbor, Trace Blackshaw, makes an unexpected appearance, and a few demands of his own.

Trace may not be a warrior from another world, but he knows exactly how to conquer his goddess. 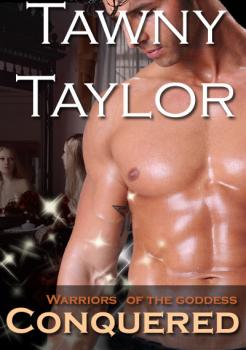 "I want to hear why you keep sending me away," Trace demanded. For the first time, his voice held a sharp edge. "Tell me."

"You must tell him," Zolan urged.

"Because..." Her neck was frying now too. Her ears. Her scalp. She couldn't possibly tell him the truth. It was too shameful. She tried to back away, but he wouldn't release her arm. Nor would he stop staring at her with those eyes. Such a strange color combination. "I'm not attracted to you in that way, and I don't want to lead you on."

He jerked her against him, and a jolt of awareness charged through her system when she felt the hard bulge pressing against her side. Her knees turned to marshmallow. He lowered his head, until his mouth hovered over hers, and his breath tickled her lips.

She froze, closed her eyes, and tried to remind herself why it was a bad idea to close that fraction of an inch between their mouths and kiss him -- like the fact that she was totally attracted to him, which meant he was probably an abusive bastard. They all were. She was eternally drawn to the cruel bad boy.

"You're lying," Trace whispered. When she lowered her head, cowering like she always did, he cupped her chin, lifting it. "Why?"