Cop With A Wand

Daisy Hudson is a newly reinstated plainclothes cop, but more importantly, she has just come to the realization that she’s a witch. Not just any witch, but a very powerful witch.

After reuniting with her partner Inspector Herb Farrell who eventually catches on to Daisy’s powers—as well as falls for her charms—together they conclude that the ordinary crimes of their city have become overshadowed by the evil conspiracy of a sinister group of gray men.

From petty crimes to those committed at the highest level of government, it becomes apparent that these tall, ugly, gray-skinned men known as the Warlocks harbor a far-reaching, ominous plot...an alien takeover of the Earth.

Even with the aid of the forceful local coven, will Daisy and Herb have the fire power to prevent the Warlocks’ impending overthrow of the government? 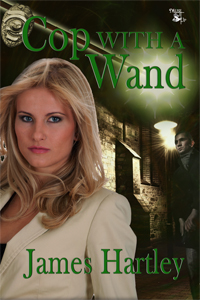 Cop With A Wand

Then there was the big fire at an apartment building. According to all the reports, there had been an explosion, and shortly after, the place was engulfed in flames. When we arrived, there were several fire trucks, and firemen were going in with Scott Packs to try to rescue people. Others were on ladders, trying to get people out through windows.

Herb asked me, "Daisy, have you ever trained on Scott Packs or other similar breathing apparatus?"

"Well, I have. I did a stint with a fire company a couple years back. I'm going to go ask if I can suit up and help with the rescues. You stay far enough back, do whatever you can to help."

He turned and walked over to one of the fire trucks. Apparently, they agreed with him. I saw him struggling into one of those yellow suits, and a minute later, he had the Scott Pack on and was walking toward the door of the building. I wasn't sure how I could assist, but I suspected that a little magic would help more than anything else I could do. I found a place where I wouldn't be seen easily, and then got out my wand and held it at the ready.

Several of the firemen had now gotten people out through windows and were bringing them down the ladders. Suddenly, as a fireman and the person he had rescued were opposite a window on the sixth floor, something inside exploded.

A cloud of smoke and flames shattered the window and burst out, hitting the fireman and knocking him and the victim he was carrying off the ladder. The six-story fall would probably be fatal to both of them.

I pointed my wand and cast a quick levitation spell. The only such spell I knew was designed to work on a single person and would not support two, but it slowed their fall quite a bit. Someone had been trying to get a net under them, but there would not really have been time. Now, with their fall slowed, the net was in place in time, and both fireman and victim were saved. I could see people talking, pointing up, waving their arms to mimic the fall. I couldn't hear them, but I could tell they didn't really believe what had

All the activity, clustered around the falling bodies, was in front of the building, and none of the firefighters there could see around the side. But I could, and I suddenly saw a bunch of people pressing up against a third-floor window. There was a stairwell near them, but it was engulfed in flames; they would never make it out that way. I wasn't even sure if the men with Scott Packs could make it through there, and the area below the window was jammed with dumpsters—getting a ladder in would be damned near impossible.

Show time for Daisy. I waved my wand and was instantly encased in a shimmering shield. Scott Packs, ha! I headed in the door to the stairs. I could hear the roar of the flames, but I was cool, and I could breathe without any trouble. I swung my wand back and forth in front of me, and the flames flickered and vanished. Up two flights and down the hall until I reached the apartment where I had seen the people. I opened the door and called to them, "Follow me. I've got a safe way out for you."

They hesitated and then moved toward the door. I led them down the hall, knocking out the flames that were beginning to spring up again. I took them down the stairs and out into the parking lot where they would be safe.

As soon as I saw they were all clear, I ducked out of sight, dropped the shield, and tucked my wand away. Then I walked out and asked them, "You people okay? If you need help, all the EMTs are around front."

Most of them started in that direction, but one man turned to me. "Who, what, was that that led us out? I've never seen anything like it."

"Experimental," I answered. "But the guy wearing it had to get back to the truck and turn it off; he was starting to lose his air. The thing still needs work."

This guy was getting to be a pain. "Yeah, the field distorts sound. Like I say, it still needs work."

I guess I finally satisfied him, because he turned and followed the others I had rescued. I waited a moment and then went over to where all the activity was.

Herb was just peeling out of his yellow coveralls. "Hi, Daisy. Ran out of air and had to get out, but I think we have everyone. There was a report of people on the third floor, but when we got there, they were gone. The flames there had died down for some reason, gave them a chance to escape."

"Good," I said. "Glad you got everyone. Do we need to stick around here, or does the fire department have everything under control?"

"Somebody needs to get statements, but it's all routine. The uniforms can handle it. Let's head back and write up our reports."
When we got back to the squad room, my report was simple. I wasn't trained for firefighting and hadn't done much, so I finished quickly and sat back to wait for Herb.