Shy Human Resources worker Justin knows that he's lucky to have a coveted window-side cubicle in his Chicago office building. He feels even luckier when he notices a handsome man in the window across from his. Will Justin be able to overcome his awkwardness-and the company's dating policy-to bring their relationship to ground level?Warning: This title contains graphic language and implied sexual situations. 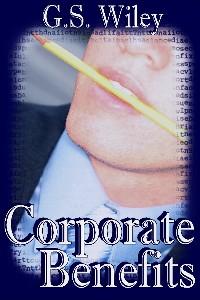 This was a delightful read...Very well crafted...It all felt very believable...I was definitely left satisfied!

One Tuesday afternoon, just after he'd come back from lunch, Justin was sitting at his computer as usual, rocking out to his iPod and inputting some payroll information onto his PC when he glanced up and saw a man looking at him from the window across the way.

Justin immediately stopped grooving to the hits of early Madonna and felt himself flush. He fixed his eyes on his computer monitor and, when he let them inch back to the window a few moments later, the man was still looking.

He was probably in his late twenties, Justin's age, and handsome, with dark hair and a much fancier suit than the white Target dress shirt and brown striped tie Justin was wearing. Justin looked away again, and when he looked back, the man was holding two pieces of paper against the window.

They were signs, and he'd written them in thick black marker, so they were easily read. "Nice Moves." Justin smiled despite himself

On the Job (MM)
J.M. Snyder
In Shelf
$1.99
Tweets by
sirenbookstrand