When a cry for help cannot be ignored or a child cries or evil is made to serve good or the taking the high road leads to disaster, the only thing we can trust are our gut feelings and that goes for humans too. 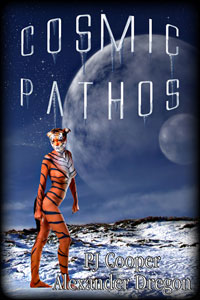 Still, if they were going to rescue her, they had to find her and take her off the ship physically. She knew she could never make it to them. The trouble was that the only way they could get to her was through what was left of bay two behind what had been her storage unit. Anything else could lead to parts of the ship that were open to the still-core of the engines. That would be a fatal choice for everyone.

She could not allow that. They were trying to help her. She couldn’t let them wander into something like that while they were trying. Despite the cold, she began trying indicator lights. The lights would mark a path that they could use, just as they guided off-loading crews to the sections of the ship they were to unload.

The coldness seemed to seep through the fabric of her suit now, making every movement slow and stiff, but she pushed on. She had gone from no hope to whatever this was and decided that this was infinitely better. Whatever happened, she would know she had done all she could.