As the 1920’s begins to roar, Gabrielle Tanner drinks and dances her way through the speakeasies of New York City, trying to outrun the memories that haunt her dreams, even if it means behavior close to courting death.

Then fate throws her to the floor in the path of Henry Morteaux, a man who seems as haunted as she is and as desperate for fun, a man with a dark past—but then, most men have secrets these days.

When the darkness grows too close for comfort, Gabbi must confront Henry and her own ghosts, and in the process, she learns that love can transcend death. 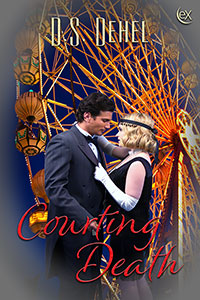 “Dance with you? Jeepers, that’d be the cat’s meow.”

The cat’s meow. More like the cat’s slimy furball. What was I thinking? Clearly, I wasn’t thinking. Only a crazy person would volunteer to be dragged around the dance floor by someone with no rhythm, no sense of direction, and the inability to count to four.

Glen’s was packed, as usual, even though it was a Tuesday night. Attendees never knew when the speakeasy would be open, or even where it would be, because it moved from place to place in an effort to avoid raids by the coppers. Tonight, it was being held in a warehouse usually packed to the rafters with crates of tinned sardines.

Please listen, you big palooka. If we cha-cha, it’ll be…it’ll be worse than your non-waltz with that last poor girl. She looked as if she’d upchuck on her shoes by the end of it.

Gabbi looked around for the girl. She’d made a beeline for the ladies’ room once free of his clutches. The slight blonde hadn’t returned. Perhaps she had yet to recover.

The guy holding her too tightly frowned, cocked his head to the side, then nodded once. “You are correct, Miss Tanner.”

What was his name? He’d walked up, introduced himself, and—“Aargglleee.”

“Are you well, Miss Tanner?” His brow furrowed, and his incessant, unctuous smile wavered.

“Oh, I’m fine. I just hadn’t expected us to start so quickly. I thought we might listen a moment and become one with the music, like Nijinsky. And maybe not turn so soon.” She forced her tone into the breeziest imaginable. He’d flung her around like The Whip at Coney Island.

“Nijinsky? Does he play for the Canton Bulldogs?” His Adam’s apple bobbed as he spoke. Gabbi tried to not stare at the knobby protrusion, but it was in her face.

This man really is a Dumb Kluck, or is that redundant? Anyhoo, he reminds me of that guy in the story we read in Miss Holmes’s class. The one about the Headless Horseman who chases that fella Ichabod Crane. That’s it. I’m dancing with Ichabod. If that’s what one would call what we’re doing.

“Are you sure you are all right?” Ichabod raised an eyebrow. “You’re very quiet.”

“I was just thinking about how bad the hooch is tonight. Glen must have made it himself, because it reminds me of the stuff my ma used to clean the linoleum.” Gabbi had tried two sips of the bathtub gin he passed off as genuine whisky. It seared her windpipes, so she’d sat and swirled it around her glass while watching Agnes, her best friend, hoof it around the floor. Then she’d been asked to dance, and now she was being whirled around like a rag doll.

Ichabod wrinkled his nose, which gave her a perfect view of the inside of his nostrils. “I don’t come to drink. I come to dance.”

Gabbi’s withering retort was cut off mid-wither as Ichabod executed an ill-timed turn and twirled her into a table, rattling the glasses. Her rear struck the sharp corner of the cheap wooden top. “Ow.” There was no keeping the ire out of her voice. “I’m moving backwards, you know. I don’t have eyes on the back of my head.”

At least Ichabod had the grace to blush, but apparently, not at ramming her into a table. No, he was staring over her shoulder. Gabbi turned. Across the table, a man sat in the shadows created by the terrible warehouse lights that dangled from the ceiling. Around him, the speakeasy laughed and drank and danced, but he was an island of calm. Something about the pale face felt very familiar.

“Sorry about that, pal. I’m not the one driving.” Gabbi raised her eyebrows and nodded at Ichabod.

“So I see.” The dark-haired man smiled, reminding her of the full moon slipping out from behind the clouds.

“It is nothing.” Dark Hair guy waved his hand at the table. “Nothing was harmed, except your partner’s pride. You really should take better care of the women you dance with.”

Gabbi thought she heard a subtle sarcastic emphasis on dance.

Ichabod cleared his throat. “Ah, yes, I—Miss Tanner?” He held out his arms.

She supposed she could feign a mortal injury and try to sit down, but Ichabod looked like he had the heebie-jeebies, and she felt a flash of sympathy, though she had no idea what frightened him. She stepped into Ichabod's arms.

Before being launched into the ersatz foxtrot, Gabbi looked back to the table and rolled her eyes so only the other man could see. His smile brightened a fraction. Then she was headed for the makeshift bar at the other end of the room.

Next, they trotted towards the hidden and guarded door that she and Agnes had passed through two hours earlier.

Then they twirled in the direction of the bathrooms. Fortunately, a small scream from a woman standing in line to use the facilities alerted Ichabod to their imminent collision, and they charged off the other way. Back and forth they bounced, slid, and whatever that strange move Ichabod made was called across the floor, wreaking havoc as they plowed over and through other couples. Gabbi might have been embarrassed, but she embraced the danger her life was in, because she was not paying attention anymore.