Marcus was just passing through Texas when he met Kent. In his cowboy hat, low-riding jeans, and black boots, Kent looks like the type of guy Marcus desperately wants to love.

But two years later, he's discovered Kent is cold and distant, the quintessential American cowboy, and spends more time drunk than sober. Marcus can never predict his mood and blames himself for the flailing relationship.

Then, one day when Kent rides into town, Marcus finds a young runaway hiding in their barn. Luke is warm, loving, and quick to please ... everything Kent is not. Though the answer seems obvious, Marcus finds himself torn between the boy who demands his love and the man whose love he craves. 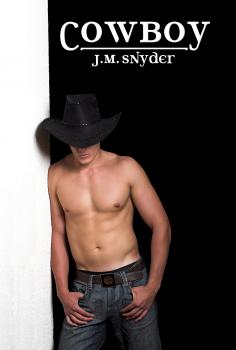 "In two months," he says, indignant. Swallowing another mouthful of food, he tells me, "It's soon enough. How old are you?"

I laugh -- he shifts the conversation away from himself so easily. "How old do you think I am?" I ask, suddenly coy. He makes me feel young and flirty again. God, has it been so long since a boy's looked at me the way he does, with such openness in his face, such unabashed interest? Or am I just so unused to kindness that I'm reading too much into him?

He shrugs and turns back to his plate. "Twenty-three," he declares, and I have to laugh again. With a shy smile, he asks, "What?"

I look much older than twenty-three. I know, I've seen myself in the mirror. Some days I look ancient. "You're just saying that to be nice," I say, and that makes him laugh. "I'm not that young."

Eating his eggs, he shrugs again. "You could be," he tells me. "You're not as old as your friend."

Another shrug, like that's no concern of his. "He looks like an old fart," he says, and so nonchalantly that I burst out laughing, I can't help it. "What?" Luke asks, confused. "He does. Drinks like a fish and can't fuck worth a damn --" My laughter dries up instantly and he ducks his head to keep from meeting my gaze. "Sorry," he mumbles. "I didn't mean that."

My voice sounds like it comes from miles away when I reply, "It's okay." It's the truth, isn't it? And I don't know what hurts worse, hearing the words out loud or knowing that it took a stranger to point them out to me. Can't fuck worth a damn ... softly, I whisper, "I'm twenty-eight."

Luke nods, his purple eyes looking everywhere but at me as he finishes his breakfast. "That's not old at all," he says. Spearing a strawberry with his fork, he rolls the fruit in the sugar bowl and then holds it out to me. "You still hungry? Open up."

My mouth pops open on its own, and I watch his face as he guides the fork towards me, his eyes never leaving the strawberry perched on the tines. When the fruit touches my lips I taste sweet sugar, cool juices, and a heady, ripe scent envelops me. He still watches the fork as I close my mouth over it and bite off the strawberry, then he pulls it through my lips slowly. His eyes are dark in the overhead light, the color of deep bruises, and his lips are parted slightly, so damn luscious and I want to taste him, I have a feeling he'll be a hundred times sweeter than the strawberry, a hundred times juicier and more ripe. "You want some more?" he asks, his voice throaty and low, and part of me knows he's not talking about the fruit anymore.

Outside, a car horn toots, spoiling the moment. Kent.