Jesse has no problem attracting women, but all they want is a relationship, marriage, family the works. Angela, his best friend's baby sister, is the only woman he never thought of as girlfriend material. That is, until she gives him dance lessons and he discovers beneath her prim, repressed shell is the sexual temptress he's always wanted.Angela is attracted to Jesse, but their relationship can't be anything but complicated since he's engaged to another woman, or so she thinks. When Jesse reveals the truth behind his "engagement," and his feelings for Angela, will the flames of desire still burn hot, or is Angela just after a bad boy?Sex and sin never went together so well.   "Missy and Cherie are friends in real life and belong to the same writing club in Nashville. When we first thought of starting a story, we threw ideas back and forth for a day or so before Cherie sent Missy the first five pages. After that day, the words flowed like water. The hero and heroine were begging to be set free from our minds. This was an exhilarating experience and we plan to continue collaborating for some time to come. We're hoping you'll have as much fun reading Cowboys Don't Dance as we had putting the words to paper." ~ Missy and Cherie ~A Siren Erotic Romance

Heat Rating: Scorching
Word Count: 30,955
43 Ratings (4.0)
Interracial Western/Cowboys
In Bookshelf
In Cart
In Wish List
Available formats
PDF
HTML
Mobi
ePub
Cover Art by Missy Lyons
Reviews
Loved it. It was very short. But I love the entire story. It was cute and sexy. I will definately read it again.

ms_blue
This was an interesting read except the constant misunderstanding which was kind of stupid and annoying. The "cowboy" only needed to open his mouth and this would have been a shorter story.
ss
Read more...
Professional Reviews

5 DELIGHTFUL DIVAS: "Cowboys Don’t Dance is just scrumptious! Angela has always wanted her brother’s best friend, Jesse, but he’s never seen her as a woman. He only thinks of her as his best friend’s “little sister”. When she gives Jesse dance lessons, she decides it’s time to change that. The dance lessons give Angela the perfect excuse to take things to the next level, so she tempts Jesse with an offer for a no-strings-attached affair. This story is well written with an enticing blend of romance and unfortunate misunderstandings that keep you rooting for Jesse and Angela. The sex is wow, yummy and carnal, all rolled into one totally awesome, sexy, melt-your-panties package! I loved it! Missy Lyons and Cherie Denis make a great writing duo. I hope they’ll write more together and I’ll be at the head of the line waiting for it. Cowboys Don’t Dance is a fantastic read!" -- Shelly,Dark Divas Reviews

The breath caught in her throat as she waited for his response. Would he kiss her or laugh at her? Would he worry about the age difference? He shouldn't. She was old enough to know what she wanted and what she wanted was Jesse. Every second became an eternity to her.

He hesitated, and she tried to push him one last time. “I promise I'll rock your world, cowboy.”

Relief flooded through her as she saw him bend down toward her. Her pulse raced in anticipation for the touch of his mouth on hers. His firm lips covered hers and her insides melted. He tasted deliciously of coffee and peppermint. He put his arms around her and pulled her tight against his body.

Oh, wow. He was hard all over.

What a kiss. He was taking her places she'd never been before even in her wildest dreams.

She'd been kissed by lots of men, but never like this. He deepened the kiss, raising her to a new level of lust and desire. The blood in her veins was on fire. She put everything into the kiss, unleashing all the desire she'd held in check for years. Years of longing or the cowboy to notice she was a grown woman. Jesse pulled her closer and Angela savored the strength of him. He was imprinting every inch of his heavy muscles on her body.

Angela leaned into his kiss. Her mouth slid sideways, and she kissed his rock solid chin, whisker rough cheeks and her lips slid lower. She kissed his chin and the sensitive place on his neck under his ear. She nipped and bit at his neck and began unbuttoning his shirt. Her fingers spread through his fine chest hair. She pushed his shirt open and rubbed her nose and mouth against the soft fur on his chest before nuzzling his small bronze nipples.

Jesse groaned and struggled to get out of his shirt, but she was too busy to help him. Her hands trailed down his body. He didn’t protest, so she went lower, unfastening his button-fly jeans.

He caught her wrist in one large hand “Angie, honey? What are you doing?”

“Please just let me do this for you. I want to taste you.”

“Are you going to say no?” Before he could answer, she finished undoing his jeans. She slid a hand into his boxers to cup his balls.

“That’s what I thought.” She knelt down before him and smiled up at him. She licked her lips and Jesse trembled. "Close your eyes and enjoy. I promise I'll be gentle." She wrapped her lips around his cock, pulling half his length into her mouth. His knees buckled as she sucked him in and let him slide out until only the knob of his cock was between her lips.

The mixed feelings, the doubt, the hesitation. None of it mattered anymore. She snuck a peek up at him and his eyes were shut tight. His fingers tangled in her hair. His moans were bringing her close to a climax. She’d never enjoyed sucking cock so much. She'd done it to a few guys in high school, but it hadn't been this exciting. Nor, had she had the feeling of control before.

Angela wanted nothing more than to make him come. No doubt about it, he was going to be a gusher, and she couldn't wait. Her toes curled in anticipation.

He had a large cock, but she managed to take all of him inside of her mouth. The head of his dick hit against the back of her throat. She bobbed over him, concentrating on licking and sucking as she massaged his balls.

“Heaven help me.” His breathing quickened. His fingers tightened on her shoulders.  He groaned out the words. “I’m going to come.”

She increased her efforts licking the length of him, pumping him with her hand. Faster and faster. She thought she was prepared for the explosion, but when his hot seed hit the back of her throat she nearly fell over. She grabbed his taut ass and sucked hard, swallowing fast, but not fast enough. His fluids dribbled out the corner of her mouth.

She licked him clean, and then swallowed the liquid left in her mouth.

“Oh really? You have a complaint?" She leaned back on her heels and looked up into his eyes.

He never took his eyes off of her as he kicked off his pants. He leaned over and scooped her up in his arms. “You were incredible.”

“Glad you shut up and let me have my way with you?”

“Mmm hmm. I'll probably regret this later, but right now, I don’t give a shit.” He carried her into her office, swept her desk clear of everything.

He laid her out on the desk and stared down at her for a moment. "Are you sure, Angie?"

She couldn’t wait to feel his cock inside of her. "I've never been surer of anything in my life. Hurry."

He nipped and nibbled at her ear and the sensitive spot under her ear until she couldn't stop squirming. Her hips lifted off the desk top. "Jesse, please. Get me out of these clothes. I need to feel you.” Jesse obliged by sliding her dance shoes off her feet. Next came her skin-tight jeans and last he tugged her tiny wet panties down her legs. Everything landed in a pile next to her desk.

He slid a finger between her feminine lips and she groaned. "God, Jesse." Her legs fell open and he slipped a second finger inside her. He pressed his fingers up against her clit and she gasped. His thumb rubbed over her clit.

She tightened her internal muscles around his fingers trying to hold them in place. She was going to come. Jesse must have guessed how close she was to a climax because he stroked her clit. Once. Twice. "Oh, God..." 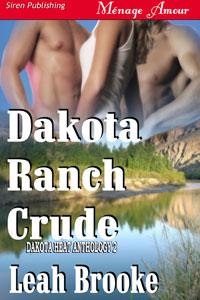 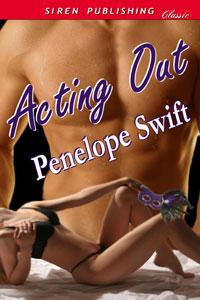