Crazy about the Cat Lady (FF)

Hairdresser Dayla Jeffreys rents a booth at a high-end salon but needs another job to make ends meet. While scrolling through employment listings online, she stumbles upon what seems to be the perfect second job -- cat sitting. She likes cats, and they're such independent creatures, she probably only needs to change the food and scoop the litter box twice a day. It sounds like easy money.

On the phone, Ms. Meredith sounds like a Type A workaholic, too busy to take care of her own cats and eager to hire someone else to do it for her. She asks Dayla to meet her at a posh home in an ultra-rich neighborhood to go over the details of the job. Women like Ms. Meredith are way out of Dayla's league.

So she's pleased to learn Keri Meredith is an attractive, down-to-earth small business owner and cat foster mom. Keri works long hours and needs someone to check on her latest foster, a calico who's expecting kittens at any moment.

Trouble is, Dayla has no experience with birthing cats or newborn kittens. But she likes Keri, and she thinks Keri might like her, too. Do the two women have more in common than cats? 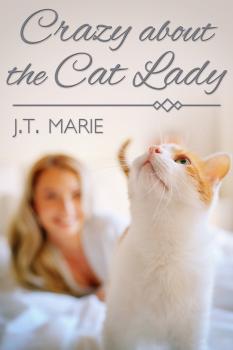 Crazy about the Cat Lady (FF)

While she’s sitting at the counter in Starbucks waiting for her drink, her phone rings. She doesn’t check the number -- who’d be calling her at this hour? -- but answers as if she’s still in the salon. “Thank you for calling Blossom. What can I book you for today?”

“Um ...” The woman on the other line hesitates, as if she isn’t sure she called the right number. After a long moment, she asks, “I’m looking for a Dayla Jeffreys?”

“This is she.” Dayla sits up taller, suddenly interested. Maybe she’ll get a morning client after all.

More sure of herself, the caller says, “Oh good. I didn’t realize you’d given your work number.”

“My ...” At first Dayla isn’t sure what the woman is talking about. Given her number when?

Then it hits her -- the cat sitter job! She put her cell number on the application. And I just answered as if I’m at work. Shit.

“Oh, no,” she hurries to explain. “I’m just the only one here at the salon, so I forwarded their line to my cell. This is my number. How can I help you?”

Dayla gives the barista a huge smile as he sets her drink down in front of her. For a moment he lingers, as if he thinks she’s talking to him, but when she turns away, he leaves.

“So, you have cats,” she says to start things moving. “I love cats.”

“Do you have any?” the woman wants to know.

With a shake of her head, Dayla says, “No, unfortunately. I grew up with them, but my lease won’t allow any pets. I really wish it did ...”

“Sounds like you need to find a better place to live.”

Dayla laughs. “I know, right?” As if she could afford to move. Part of the reason she’s looking for a second job is to help make ends meet as it is.

The woman waits to see if Dayla has anything more to add, but she doesn’t. Before the silence can grow awkward between them, the woman speaks again. “Well, I do have cats, as you probably figured out. I’m Keri Meredith, and I’m looking for someone who can stop by my house twice a day to take care of them during the week. Once in the morning and once in the evening --”

“I can do that,” Dayla assures her. “You must put in some long hours at work.”

“You can say that.” The woman’s voice is firm, her words clipped. Dayla gets the impression this is a woman who insists on being called Ms. Meredith, emphasis on the Ms. She wonders if Ms. Meredith is as severe looking as she sounds, or if it’s an attitude she affects to play hardball in a man’s world.

And what’s beneath that hard exterior? Dayla muses. Is there a playful kitten inside the corporate lioness?

Dayla shakes away the question. Who cares, as long as she pays in cash?

“So twice a day,” Dayla says, taking the lid off her cup to blow on her macchiato. “I can do that.”

“I need someone reliable,” Ms. Meredith says, “someone I can trust.”

“Who can start today.”

Dayla almost chokes on the drink. It burns down her throat and she gasps, trying to catch her breath. “To ... today?”

“Well, this week,” Ms. Meredith amends, “but we’d need to meet to discuss the particulars and I have some time open this afternoon. What’s your schedule look like?”

We can’t talk things out over the phone?

But Dayla realizes that won’t work; for starters, if she’s hired, she’ll need the key to Ms. Meredith’s house. Can’t really check on a cat just by looking in through the windows, and the litter box won’t clean itself.

“I’m here till two,” Dayla says. “So I can meet up any time after that. Where are you at, exactly?”

“Windsor Farms. Are you familiar with it?”

Of course. Did Dayla expect anything less? Windsor Farms is a posh neighborhood full of high-end, multi-million-dollar homes right on the James River. Or, as those who live there say, on the rivah. Though only a fifteen minute drive from Dayla’s little apartment, it might as well be on another planet. Working girls like Dayla can’t afford to look at most of the houses in Windsor Farms.

Who’s she kidding? She can’t even dream of them.

Carefully, she says, “I know where it is.”

“Great.” Ms. Meredith reels off an address and doesn’t ask if she needs directions. In this day and age, Dayla can find it easily enough on her phone. “I’ll expect you at three, then? How does that sound?”

Dayla has to bite back the urge to make a snooty reply, something like, “Smashing, dah-link. Toode-loo!” Instead she murmurs in agreement, sipping her drink to keep from saying anything she’ll regret.

Forty bucks a day, she reminds herself. Don’t blow this.