Yuppie bounder Ash likes fast cars, shallow friendships, and really brief encounters with beautiful women. He meets his match, though, in sexy cyber-witch Elena. Unlike other women he’s bedded, Elena holds all the power. She’s demanding, selfish, and so, so good in bed. Of course she dumps him the minute he declares his love. It’s only karmic justice, after all, and this tale is all about karmic justice.

It turns out that heartbreak is good for the soul, and Ash learns his lesson, developing depth, a personality, and maybe even some integrity. The new, improved Ash meets and falls for good-girl Virginia, and discovers good girls can be good in bed, too.

But, of course, Elena returns, using dark magicks and sexual trickery to pursue the man she never wanted in the first place… until somebody else did. Will she win Ash back or will Virginia triumph in the bedroom battle of good girl vs. dark power?

Or will anyone emerge unscathed? 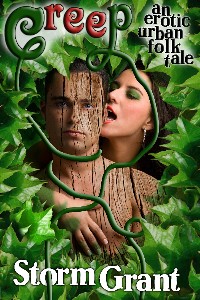 "Witty, laugh-out-loud creepy. A real winner. Storm penned a tale that was not only clever...but able to keep my attention from start to finish... Captivating, creepy, interesting, imaginative...and so much more. This one really got me in the mood for things that go bump in the night."

Now Ash might not have been the sharpest tool in the shed, but he was by no means stupid. He’d had his marching orders carved on his hipbone for him, so this time, once they tumbled into her bed together, he gave as good as he got.

Their love play resembled a struggle for supremacy; the bedroom a battlefield. He, too, had teeth and nails and superior strength that came in handy for holding her in place and then watching her squirm and struggle. By the time the night was over they were both weary and bruised and sore and satiated.

It was the best sex Ash had ever had.