Poor Cupid, he's having one HELL of a week. He's been run over by a car, mugged, shot, stabbed, poisoned and dumped into the San Francisco Bay, all because he's been assigned to join a lovely young couple, Michael Tattinger and Nina Davis, by Valentine's Day. However, Mistress Fate and her inept band of Universal Solicitors, cosmic attorneys who keep track of all human events by studying the Akashic Book, are doing everything they can to stop Cupid in his tracks. The Akashic Book is a celestial record of all choices, actions, events and their outcomes made by every human being ever born. It seems the Book reveals to Fate's attorneys, if Michael and Nina become a couple, they will eventually produce a son who will replace Miss Fate as the Master of Fate. Not willing to relinquish her power, Miss Fate will have none of it. She pulls out all the stops to prevent the young couple’s meeting, allowing no one, including a god, to stand in her way.

Will Cupid be able to keep to his deadline? Will the bumbling Universal Solicitors prove successful? Will Miss Fate finally understand the meaning of true love and realize nothing on Earth or in Heaven can stop her own Wheel of Fortune from turning? 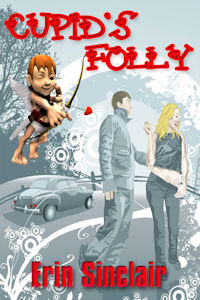 Cupid's heavy breathing jarred his lungs. He'd been on the run for the last hour. Every time his pursuers caught up, a feint here, a dodge there, enabled his escape.

The smell of the wharf assailed his senses as the evening's drizzling rain muted the normal odors of the natural and unnatural. A foghorn from a distant ship on the bay beckoned to the land bound. Shadows leapt forward, vicious creatures seeking to impede his progress. He tamed them, utilized the surreal gloom to his advantage.

A painful throb to his side caused him to bend over where he placed his hands on soaked knees. He fingered the torn right leg of cloth, pulled it back to reveal a battered kneecap. Shit, this is--was my favorite suit. The cold night air inflamed the injury, caused the open wound to sting. A grimace twitched his lips as he recalled its cause. He slipped on a forgotten dead fish in an alley on his last run from the group.

Far off voices and the echo of heavy footsteps forced Cupid to recede into a cavity created by two shipping containers improperly stacked side by side. The narrowness of his cave forced his breathing to slow.

"How did he disappear so fast? We were right behind him," a nasal whine of a voice emanating from a man pierced the night.

"I don't know," a frustrated cultured British accent from another man responded.

A woman's voice, clear and high-pitched, offered a harsh answer. "Could it be that you're both idiots?"

Cupid knew Mistress Fate had arrived. The Brit mumbled something but Cupid couldn't understand him.

"You're lucky you're good in the sack, Mr. Remington," she snapped in cruel reply. "Otherwise, your markers in Vegas would be due and owing right now."

The cheeky Mr. Remington was silent. A few minutes after Fate's last comment, only the sound of soft rain against metal and another blast of a foghorn gave Cupid the impression he was alone.

To play it safe, he waited a few moments more before stepping out of his refuge. He peered around him. His pursuers were gone. Cupid found his bearings and hobbled toward the point where the night's chase began, exhausted, hurt and hungry. "Care to share?" he inquired to a feral cat that eyeballed him with territorial certainty, protecting its rat buffet.

The animal hissed and grabbed its dinner, slinking backward toward the cover of garbage cans.

"How rude," Cupid stated. A shrill whistle broke the night and caused him to stop. It was the kind of attention grabbing sound construction workers used to heckle pretty girls as they walked by their work zones.

Cupid froze. He rolled his eyes and sighed. This night is never going to end. Turning to gaze at the source, despite the weariness pouring through him, his admired the perfect body of his black leather clad captor in appreciation. She is something.

The thud of footsteps behind him initiated a glance over his shoulder. Two of Fate's Universal Solicitors were fast approaching. He recognized the handsome Mr. Remington's blond blue-eyed beauty and the creepy bugger of a man, Mr. Leach. Cupid shuddered as his gaze landed on the cowlick bald patch with its gray tufts of hair sprouting from the sides of Leach's egg shaped head. The wiry mess somehow found a way to take root in his ears. Cupid's lip curled in disgust. By Zeus, Leach, will you do something about that?

Cupid turned once more to meet Fate's cobra stare with a grin and nodded politely to the woman approaching him. "Ursula, a pleasure as always." Her smile was dazzling. Eros imagined all the sharks of the Pacific Ocean bowed their heads in appreciation of its toothy cruelty.

"Eros Bubala, hasn't your mother ever told you it's dangerous to play outside after dark?"

Ursula strutted toward him. The sway of her hips was hypnotic. If they were not on opposite sides, he could show her a few things about hips--his and hers. She had no problem invading his personal space. Standing very close, her spiked hair poking his cheekbone, she sighed. As tall as he, only because of four-inch stacked black leather stiletto boots, she leaned toward his right ear and whispered seductively.

"Do you really think so?"

Cupid's eyes and mouth popped open in startled surprise as the pain of a dagger's blade stabbing through his diaphragm shocked his brain into paralysis. A numbing sensation followed. He looked down at a spreading stain that looked black in the dim glow of streetlights muted by the mist of moisture in the air. He laughed. "You won't succeed," he muttered as the threat of unconsciousness pulled him down to the wet ground. He fought to stay awake as two sets of masculine hands lifted him. One of the hands rifled through his rear pocket and pulled out his wallet. Damn lawyers, always stealing your money.

The freezing cold saltwater lay claim to him, the current making a human buoy of his powerless body before a rip tide tucked him under the pier and water filled his lungs. A final thought cavorted through his mind before he blacked out. My tailor's going to kill me.