Curse of a Dragon's Claim

The flame within a dragon warrior's heart awakens Arianna's passion as she begins a journey in which she will discover she's something more than she ever imagined possible.

The realm of the dragons is a world of magic, danger, and mystery. For centuries they've been at war with the vampires, but now the two enemies must work together to save all immortals, and the mortals they co-exist with, from an ancient evil. In order to do so, they need the help of the Forsaken, descendants of immortals who were cast out into the human realm, their memories wiped clean of their true heritage.

Clayne MacDagon is a powerful dragon warrior who is sent on a mission to find one of the Forsaken. Although he's told that this woman is his fated mate, he can't believe it could possibly be true. Arianna Mergliano possesses both dragon and vampire blood, and Clayne has an intense hatred for anything even remotely related to vampires, the evil beings who were responsible for his beloved twin's death.

When Arianna meets Clayne, she's convinced that the man is insane, or maybe he's a warlock or even the devil himself, but whichever it is, she wants nothing to do with him.

Clayne knows he can't fail at his mission. And once he meets Arianna he also knows that what he's been told is true—she is, ironically, his intended mate.

Convincing her to accept him is only the beginning. He has to protect her from those who might want her dead. Together, they must face the shadows and evil that have long plagued the immortal realms and find a way to survive the coming war.

Curse of a Dragon's Claim

"The relationship between Clayne and Arianna was well written as well as believable. The way author Ciara Lake developed their relationship throughout the book was just one of the things I enjoyed about this book." Tanya at The Romance Studio

"Curse of a Dragon's Claim has layers upon layers of intrigue, passion, danger and mystic happenings that keep it a page-turner." Jo at Joyfully Reviewed

"Don't scream. I mean you no harm," Clayne said as he studied Arianna's reflection in the mirror. "Screaming will only cause an unnecessary disruption to their party. I'll have to disappear, only to come back later." Touching her cheek, he captured a tear with his finger. He placed the tear on his tongue, his eyes falling to half-mast for a moment. "Mmm, you taste sweet."

Stunned, Arianna gaped at him for a moment. "What are you doing here?" She ground out each word. "How long have you been here? I didn't hear my door open." Their stares locked in the mirror. She paled when she realized he had not entered through a door. "If I'm not a witch, you are."

"I'm not a witch, those fickle creatures are governed by wealth rather than any true loyalty." He leaned down and boldly kissed the mark on her shoulder.

Arianna jerked in surprise. The feel of his lips made her pulse quicken. She shivered, helpless to her response.

"You carry my mark, something I wasn't informed of. I find this all fascinating." His eyes bored into hers. Then he shook his head. "It seems even in my years, I can still be surprised." Placing his hands on her bare upper arms, he lightly squeezed. "I was determined not to like you, there's so little of your kind redeemable to my species."

Arianna, frozen, as if hypnotized by him, continued to stare at his reflection.

"I'm fated to what I've despised for so very long. At least half of you is what I've despised. The fates can be so…unpredictable. They do like their games." He grinned. "The fates enjoy these circumstances." The blue flames in his eyes flared as he watched her. The implausible light show within his pupils woke her from her trance.

"Your mark?" She glared at him. "What you've learned to despise? The games of the fates?" Arianna spit each one of his phrases back at him. "You, Signor, are clearly insane. I don't understand a thing you're saying. Nor do I care to."

"You may think I'm insane, but I'm not. Instead, it seems I'm cursed to be fated to a beautiful dracvipen. I've yet to decide what to do with this revelation. After all, curses aren't all bad. Especially when they aren't really curses." Boldly, he wrapped his arms around her, pulling her tight against him. "You do feel nice. You smell good too. I think it a fair exchange. One can ignore the mix as long as it comes in such a beautiful package."

She stood, struggling to get free of him. He held her firm, sniffing her neck. Unable to help it, she tilted her head, giving him better access for a brief moment before she returned to her senses. "Unhand me, you insane rogue."

"As you wish, Arianna." Clayne withdrew his arms from around her. A chill passed through her heated body as he let go. "You'll miss our heat." He continued to stand behind her. His eyes flamed bright. "You're lovely. You have spirit, yet there's sweetness to you. A beautiful combination, you're absolutely fascinating." You’re most definitely a charming mix.

"Get the hell out of my head. You…you…rogue." Arianna turned to face him. She tried to stomp on his foot. Deftly, he avoided her attack.

"For a woman with such linguistic abilities you're truly lacking in vocabulary to describe me," he teased.

She wanted to slap his face, taking the grin right off.

"And you'll have to learn to move much faster to keep up with me. I'm very swift." He reached around, swatting her on her behind. 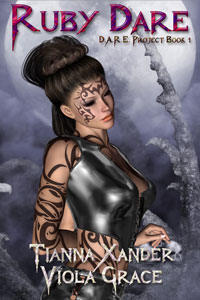