When Ultimate Evil engulfs the entire world, only Dagger can pierce the Darkness—even if the Apocalypse falls on a school night!

Dagger Beaumont is a High School senior who’s been recruited by D.U.S.T.—a covert governmental organization dedicated to battling supernatural terrorism all over the globe.

However, Dagger’s unresolved conflict over his missing brother could be his undoing, as he races around the world battling the Dark Reich, a diabolical organization on a quest to possess an ancient artifact and unleash a mystical plague to enslave humanity. If that weren't treacherous enough, Dagger must juggle his life as a secret agent with his social life, where he faces romantic rivalry for the guy of his dreams, a mysterious and handsome new student at his haunted boarding school.

But in a high-stakes world where nothing is as it seems, and death lurks in every shadow, love rides shotgun with survival! 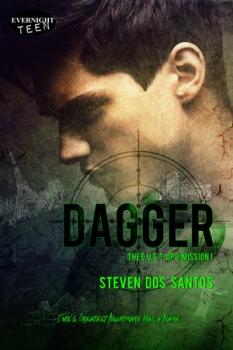 I pulled the sheet down Reinaldo’s naked right hip, trying hard not to peek at what lay beyond. Why did he have to be so damn hot? Hey, I was a typical seventeen year-old guy, raging hormones and all that jazz. With one big difference.

I had orders to terminate.

Reinaldo lay sprawled beside me on the king-sized bed in our Parisian hotel suite, looking like the statue of David in a centerfold spread: jet-black curly hair, Roman nose, angular jaw, the chiseled body of a college gymnast. His biceps bulged, as did his pecs, which were lightly coated with hair that tapered into a trail leading down ridges of sculpted abs, past his pelvis, before disappearing into the tent under the sheets. As far as what was hidden, let’s just say all that rigorous exercise hadn’t stunted his growth.

He was the first guy to tell me he loved me. And now he’d be the first guy I had to kill. The quintessential love-hate relationship. If there’s one thing I’d learned ever since my brother Phillipe’s supernatural disappearance, it was that love had no business in the world of occult espionage.

I shifted closer, my face inches from his pelvis. Moving in, I smelled the freshly laundered linen, mixed with Reinaldo’s own musky athletic scent. I blinked my eyes three times, activating the infrared contact lenses I’d slipped on earlier, while Reinaldo’d slipped out of his clothes, after drinking the potion I’d slipped in his wine. Talk about a slippery slope.

He didn’t look quite as sexy bathed in a green glow, more like Michelangelo’s boy with a serious case of gangrene. But the only part of Reinaldo’s body that truly mattered was the part no longer hidden by the sheet. The part that throbbed underneath the gaze of my infrared lenses.

It was there, on his inner right thigh. The birthmark. My intel had been correct.

It was so tiny I might not have ever seen it, even if we’d done the deed.

What was it? Right?—no, left to zoom in. I blinked my left eye a few times enlarging the image. It was a symbol. A dragon inside a pyramid, its base parallel to another pyramid base facing the opposite direction and encasing some type of demon. Both of these were housed within a larger triangle.

I squinted, flexing my brows. Snap! Snap! Snap! The photographic evidence of the mark uploaded via the lenses’ transmitter. These shades rocked. I’d have to give props to Felanie—if I made it out of this.

I glanced back up at Reinaldo’s face. He looked so peaceful lying there, completely unaware he’d been duped. For a split second I almost felt sorry for him. Keywords split and almost. He’d more than duped me by pretending to be my boyfriend, until I’d found out he was a member of a sorcerist cell. Even so, the concept of terminating him sounded clinical and abstract when discussed in a cold, sterile briefing room, especially when I’d prepared months in advance, both physically and mentally, convincing myself it was for the greater good. With the target warm and curled up against me like a helpless pup, termination seemed more like murder. Orders be damned. Better to drug him and see if I could find it first before going down that road.

I maneuvered my body across his sleeping form. When our skin touched, I broke out into goose flesh.

I held my breath, tensing every muscle.

Then he stretched a sculpted bicep over his head, not a care in the world.

I reached over the side of the bed, past the ornately carved nightstand, and carefully rummaged through the pile of clothes Prince Charming had deposited on the lush, wine-colored rug. One black V-neck T-shirt with no pockets, the better to show off his massive chest. Skin-tight jeans that hugged his thick thighs and narrow waist contained nothing but empty pockets. A pair of size twelve flip-flops. Not much else.

I’d already performed a sweep of the room. He had to have it on him.

Wait a minute. The big silver belt buckle. Trendy. A good place for hiding a top-secret micro-chip embedded with an encryption key … stylish. I snatched it up, the metal feeling cold, even in my icy hands.

I examined the buckle, a very butch affair, complete with some type of horned steer. At first I’d thought Reinaldo’d been going for a metrosexual country western look. But the horns reminded me of the ones on that birthmark nestled against his loins.

My fingers explored the buckle’s surface, my thumbs pressing against every ridge. Nada. I’d have to improvise. Following my instincts, I pricked my thumb on the prong. A small trickle of blood bubbled forth. Kind of unconventional for espionage, I know, but it’s not like I worked for the CIA. As a matter of fact, I doubted even the CIA knew about us, that’s how high we were on the secret ladder. The Department of Unexplained Supernatural Terrorism. DUST. Saving the unsuspecting world from the criminal forces of the supernatural and the occult, one phenomenon at a time.

I smeared the blood on the buckle’s surface, hoping the “offering” would activate the trigger point. Voila! The surface snapped open, revealing the microchip lying in the buckle’s womb. It amazed me the clout virgin blood carried in the occult world. Yes, technically, I was still a virgin, though hardly the poster boy for innocence at the moment.

I sat up, carefully removed the dime sized-chip, and slipped it into the hidden slot in the waistband of my tighty-whities. Then I replaced the buckle’s face and dropped the pants back into the pile, just as the light came on. Two powerful arms encircled me from behind.

The Tracker Claims the Cutie (MM)
Bellann Summer
In Shelf
$4.50
Tweets by
sirenbookstrand