Garrett is in the closet. He hasn't acted upon his cravings for other men and since he hasn't connected intimately with a man, he's not gay, but things are about to change.

Garrett holds tight to a bitter-sweet memory of Darcy, his dead high school sweetheart. Her ghost leads him home for the holidays and straight into the arms of his best friends.

Sam and Logan are committed life partners. Garrett is familiar with their sexual preferences. He wants to explore a relationship with them but he's hesitant to make the first move. Admittedly, he's attracted to both men, and truly believes Darcy's ghost wants him to find comfort in their arms.

When Garrett returns home for the holidays, he's eager to revisit a past he once left behind. Sam and Logan offer him their couch but their southern hospitality extends far beyond what he ever imagined. Once Garrett discovers what goes on under their mistletoe, he is hooked and the best he can hope for is an open invitation to stay. 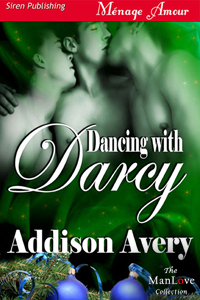 “I told you once already. I don’t do cock.” Garrett choked out the words as his gaze narrowed on the mushroom head pressing closer to his lips.

“You may not do cock in general but you will suck, and swallow, when the one in question is mine.” Sam fisted his shaft and brought it to Garrett’s chin again. This time, he moved closer. “Open.”

Logan entered the bedroom. “Go easy on him.”

“Easy hell. I can’t wait for him to open up his pretty little mouth because once he shows me how fast his sweet tongue can move, I plan on sinking inside one tight virgin ass. Then, I’ll make him a real man.” Sam’s hard voice held too much sex appeal. He continued to wait. Pre-cum glistened along the tip of his dick.

“Tell me something, Garrett, have you ever had a man fuck your ass long and hard until you screamed for more? Has anyone shown you what it’s like to feel alive with a lust so intense you’re begging for relief?” Sam’s eyes twinkled with desire.

Garrett’s eyes watered. He glanced around the room, searching for her. “Darcy wouldn’t have wanted us to...” The knot in his chest threatened to suffocate him if he took Sam’s offer and dipped his head. Oh, but he wanted to try it. Just once, he wanted to sink his teeth into the idea and allow his cheeks to swell with a hard man’s intentions. He wanted to play games with Sam and Logan, dangerous ones, and they wouldn’t let it ride. They were not the kind of men who appreciated a tease.

“Darcy, hell. Darcy is dead, Garrett.” Sam stepped away from him, placed a hand on his shoulder and stared into his eyes. “She’s been dead for years. You’ve watched her ghost, chased it almost and for what? To let her drag you into the after-life? Where’s the fairness in it?” As Sam spoke, his left hand remained on Garrett’s body while his right threaded his stiff member. He barely noticed and if he did, it didn’t matter. He pumped his hard cock with a firm grip and carried on a simple conversation.

“You’re not content because it’s not enough. I know you, Garrett, you’re anything but a happy man.” A smile spread over his heart shaped mouth and he chuckled, “But I’m going to show you how to enjoy life again. You’ll know what it’s like to inhale the best part of me and find yourself intoxicated with the happiness I bring. You’ll whistle ‘Dixie’ and sing ‘Santa Claus is Coming to Town’. For the record, you can call me Santa.”

Tell Him
Jo Tannah
In Shelf
$0.00
Tweets by
sirenbookstrand