Danny Doc Dilly learns his homeland, the Tropic Kingdom, is in danger of complete collapse. Makers of the greatest chocolate in the world, the kingdom is a land of jolly, friendly souls, who even share the same first name, Danny. It is a place loved by many.

But not all. The kingdom’s cocoa fleet has been raided so many times that the chocolate-making grinds to a halt, shops close, and people are leaving.

King Danny Jack Merriweather calls the finest minds in the kingdom together to make plain the problem. His youngest adviser, Danny Doc Dilly, embraces the challenge and calls upon his friend, the dragoness Hephzibah to assist him in finding out what happened to the cocoa.

When Danny Doc and Hephzibah find the cocoa thief it is a revelation so strange and awkward, he dreads to report it as the thief appears to be a giant mechanical duck. And yet nothing in Danny Doc’s life prepares him for the reality of what happens when he discovers who made the creature. The answer could alter the Tropic Kingdom forever.

After that, the only question left to answer is…will they survive? 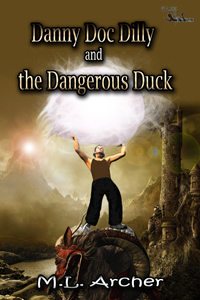 “Yes, stay close. Stay in my shadow,” the dragon whispered as he slipped into the water.

“I quite agree,” he said keeping himself level by her large, amber eye. He checked the horizon again, and gasped, “Good Lord! Look!”

They turned to watch, and even though he saw it with his own eyes, Doc Dilly could not believe it. A huge bird bore down on the little skiff. It had a shiny, forest green head, tree-brown feathers, and a rust-colored, rounded bill. Much too large to perch on the boat, it landed next to it with a huge splash, then craned its neck over its side, and to his surprise, when it spied the sack of cocoa, the beasts eyes shone red. It then tossed the sack into the air with it’s beak, caught it in it’s mouth, and devoured the entire bag in one gulp. Danny Doc gazed at it from the water in opened mouthed wonder. Those weren’t real feathers. From the way the sun glinted off the thing it was clearly made of metal.

“Most unnatural. This cannot be as it appears. It