Prince Darinel is traveling–for what feels like forever. Expelled from his father’s kingdom, he just wants to find a new home. When a shadow lures him to a wealthy kingdom, he stays to discover more about the darkness, but the citizens are tight-lipped.

Their king welcomes the foreign Prince hoping that he will solve his two problems: the dragon and his strong-willed daughter. Coming from a warrior kingdom, Darinel despises violence, but charmed by Princess Tuskja’s dare, he sets out to confront the beast. Instead of finding a fierce dragon, he finds a friend. The dragon’s malicious humor and his love of fairy tales entangle Darinel in a summer of adventures, while danger stirs in the East, the Dark Prince. Being refused by the Princess and humiliated by the dragon, this proud prince seeks revenge.

In compliance with the king’s decree, Darinel is torn between his friendship with the dragon and his love for Princess Tuskja, whom he can only marry if he kills his friend. Before he can make a decision, the kingdom is under attack. Now it is up to the dragon to either help his friend or respect his wish to not interfere. 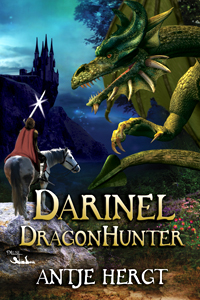 Take an exiled prince and a good-hearted dragon, add a princess whose father has promised her hand in marriage to any man that kills the dragon, stir, and you have a delightful fantasy story about good and bad and misunderstandings.

DARINEL DRAGONHUNTER, Author Antje Hergt’s debut novel for young readers, takes the reader on an adventure with Prince Darinel, who disagrees with his father, King Odomere, in the way he rules the kingdom and so leaves home to search for a new place to live. After wandering for a while, he discovers a kingdom that seems to be exactly what he’s looking for. All is not perfect, however. Soon Prince Darinel is torn between his friendship with the dragon, Idunal, and his love for the Princess Tuskja. To marry her, Darinel must kill the dragon. How does a young prince kill his best friend, even for the girl he loves?

The author keeps the action going with the conflict of an invading army, the people’s fear of the dragon, and Darinel’s desire to protect the dragon and also marry the princess. Antje Hergt describes the land, the snow, and the dragon so vividly the reader can visualize what’s going on in each scene. The characters’ personalities are well developed. You like some; others you hope get what they deserve. I have to admit that Idunal is my favorite character. He’s so … Well, you’ll have to read the book to find out. DARINEL DRAGONHUNTER is a great read for the young and for older readers too. The book would make a nice addition to school libraries and classrooms that have e Readers. You’ll also want a copy for your personal reader. This is a nice beginning to a series. I’m looking forward to seeing what dangers and adventures await Darinel, Tuskja, and Idunal in the next edition.
###

“A very human viewpoint,” the voice agreed. “But it brings so much trouble.”

“Exactly. I just didn’t fit in my father’s plans and... Well, I kind of got kicked out.”

“After I told my father, I was leaving,” Darinel explained, his hands moving to support his words. “I wanted to spare him the embarrassment so I packed my things and told everybody I was going on an adventure.”

“And that’s why you are here now?” the voice inquired, amused.

“Nah!” the prince said with a smirk. “I just wanted to leave with a believable explanation, so my father wouldn’t lose face for having a firstborn who doesn’t want to fight...and to make room for my little brother.”

“Lose his face? Like it would fall off?” the voice asked, confused.

The prince laughed. “Man, what rock have you been living under?”

“Why? What’s so wrong with living under a rock?” The voice sounded hurt.

The prince bit his lip to stop the laughter building up in his chest, but failed miserably. Laughing, he replied, “It’s just an expression. Haven’t you heard it before?”

“Not that I recall,” the voice said, sulking. “And I pride myself on knowing quite a few phrases.”

The prince sat up straight.

“I’m sorry. It is a common phrase where I’m from and it stands for ‘to be embarrassed by someone’s actions.’ But it also means to lose respect and honour.”

“Oh, I see. So, by admitting that you hate fighting, you would be a disappointment to your father and he would be embarrassed by you. Am I correct?” inquired the voice, eager.

The prince winced. “Yeah, you could put it like that.”

“Ha! I learned something new today!” the voice said, excited.

The prince smiled. “Glad to be of help.”

“So, what’s that got to do with your little brother?” the voice asked.

“Well, I’m the first born and so would inherit my father’s kingdom. My little brother would have been the one to leave and find his own place.” Darinel intertwined his long fingers. “But he belongs there and is madly in love with the daughter of one of the knights.” He smiled at remembering his brother’s astonished face.

“With me still being unmarried, they weren’t allowed to wed either. You know, stupid rules royalty have to live by,” he added, flinging his hands in the air. “So I decided to go. This way he can marry and stay in my father’s kingdom.”

“Quite a noble sacrifice.” The voice sounded impressed.

“Of course it is!” the voice boomed, and a few rocks splashed into the creek. “You gave up everything for your brother.”

The prince shook his head. “Isn’t that what any big brother would do?”

The voice remained silent for a moment and Darinel watched the stream as it rushed by.

“So why are you here then?”

A grin flashed over the prince’s face. “Princess Tuskja dared me.”

“Did she now?” The voice sounded amused. “Knowing her, I can picture that.”

“You are acquainted with the princess?” He looked up, surprised.

“Well, just from her roaming around,” the voice admitted. “She has quite an inquisitive mind. She explored my mountains for a while.”

“But then her father found out and locked her up in the castle.”

Darinel shaded his eyes, but still couldn’t make out where the voice was coming from.

“I heard rumours about that. Anyway, all I wanted to do is settle here.”

“So what happened?” the voice asked.

“I went to the king to ask his permission to stay,” the prince said, “which he granted. But then he threw in this assignment of killing the dragon and getting his daughter in reward.”

“Yep, that’s the deal,” the prince said. “I thanked the king and pointed out I was only interested in settling down, not marrying. That’s when the princess dared me.”

“Yeah.” He sighed. “I could not let that pass, could I? She ridiculed me in front of the whole court. So I packed my horse and came up here.”

“Yes, it is. But anyway, it’s way too hot to fight today. And I’d rather make friends than enemies. So, won’t you come out now and sit with me?” the prince offered a second time.

Silence fell over the little valley, where the creek bubbled quietly. He feared the voice had left when a loud rustle like sails in the breeze filled the air. The sun disappeared as the wind picked up. Little dust roses curled skyward and showered him with debris. He leaned into the rock as the dragon landed in front of him. With great care, the beast folded its wings, curling his tail around him. Darinel’s eyes widened with admiration. Tall as three horses stacked on top of each other and wide as a house, the dragon towered over him. His dark green scales reflected the sunlight so intensely he had to shade his eyes. Impressive claws scraped the ground as the dragon tilted his head and golden eyes studied him with keen interest.

He smiled as he observed the dragon in return. For a moment, neither of them spoke and Darinel had the feeling the beast was as curious about him as he was about it. Slowly, it lowered his triangle-shaped head to take a good sniff at him, revealing its horned eye ridges. Darinel held his breath, but strangely he didn’t feel scared, more intrigued. The dragon didn’t look mean. Its golden eyes radiated warmth and longing more than fierceness and malice. It was intelligent with a wicked sense of humour. He liked that.

“You knew it was me all along?” the dragon asked, eyeing him suspiciously.

The prince tilted his head, so he could see the dragon better and smiled.

“Who else would be out here with a dangerous dragon lurking around in the mountains?”