“You can release me.” Noa tried to turn her mind away from the warmth seeping into her body from his. She didn’t need someone taking care of her; she did very well on her own.

“I could, but then you would catch cold, or worse, pneumonia.”

“Well, if you hadn’t taken my coat there wouldn’t be a problem.”

“True, and if you had remained in the house your teeth wouldn’t be chattering.”

She opened her mouth but nothing came out. What had her reason for leaving during a snowstorm been?

All Noa Manchester had to do was collect fire opals and return home. But the beguiling song of a Gods’ Stone coaxed her to follow; now she faces an Immortal of whom she hadn’t known existed. How had a simple trip turned into a healing of the soul?

Andros D’Lyons chose to accept his long life for what it was; a duty to the Ancient Gods. The appearance of a young hybrid female changes that. Faced with a choice, he gave control to Noa. If anything developed deeper between them, it was her decision.

Will Noa accept Andros for who he is to her? If she does, where will that leave her kidnapped sister and niece? 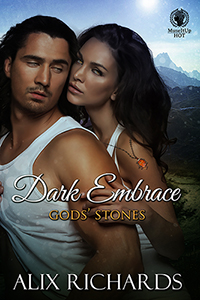 “You can release me.” She tried to turn her mind away from the warmth seeping into her body from his. She didn’t need someone taking care of her; she did very well on her own.

“I could, but then you would catch cold, or worse, pneumonia.”

“Well, if you hadn’t taken my coat there wouldn’t be a problem.”

“True, and if you had remained in the house your teeth wouldn’t be chattering.”

She opened her mouth but nothing came out. What had been her reason for leaving during a snowstorm? She’d been angry, for one. Noa stiffened as she fought her body wanting to relax into Andros.

“Are you always this annoying?” His arms tightened, seemingly able to block the frigid winds.

“Not—usually,” she mumbled, angry for not being more like her sisters. None of them needed a male to shelter them.

When the pain plowed through his system, Andros had stumbled. Now he understood how she’d gotten out of the cuffs. He knew she heard him, sneaking around the trees and coming up behind her.

He forced his attention to remain on getting her back to the warmth of the house, as the temperatures neared zero if his sensors were correct. He didn’t want to evaluate the how of her injury. Part of him knew she’d react the same way as any trapped animal.

“Let’s get you back to the house and if you still want to leave, when the weather clears I’ll drive you to the nearest station or drop you where you wish to go.” He used his large body to shield Noa from the biting wind as he steered her back in the direction they came. “Deal?”

“I—guess.” Her words chattered along with her teeth. He ground his, wanting to save time and just transport them. But he knew that would just cause more trouble.

It didn’t take long to reach the back of the house and get her inside. Andros fought against the protective instincts to carry her. He had to gain her trust.

As soon as that thought settled, he stomped it down. He wasn’t in the market for a divine mate. Not now, not ever.

“Are you going to cuff me again?” Noa’s voice seemed a lot smoother, it still wobbled, and her body shook. She’d been out in the cold too long.

“Can I trust you to remain here until it’s clear?” He glanced down at the top of her head still tucked under his shoulder, inside his jacket.

He released the air he hadn’t known he’d held. Something told him Noa’s word was her vow. He didn’t look at where that knowledge came from. Too much was occurring all at once and it was overwhelming, even for one such as him.

He maneuvered her down the same hallway he’d gone down earlier. Instead of placing her back in the bedroom, he stopped at the end room where he slept. Opening the door, he guided her inside.

“Here are some warmer clothes.” He waved a hand, making a flannel top and bottoms appear as he released her and stepped back. “Change. I’ll get food and tea.” He set the items on the bed and cocked his head. With another wave of his hand a thick robe appeared. “This should warm you up.”

He turned and walked to the door, telling himself he was doing the right thing by providing her with shelter until the weather passed. He knew this was a test. Like so many others within his life, he either passed or failed. He paused and looked over his shoulder at Noa.

Deep inside, Andros knew Kanoa Manchester was his Twin Flame. He’d always known she would be young and needing his protection. Not so much because she couldn’t keep herself safe, but because she appeared innocent and unknowing of the real world.

She matched him blow for blow, though they hadn’t actually fought. Their words were enough to tell him she didn’t bend or bow easily, if at all. Her spine was made of steel and she became spitting mad when cornered.

Yes, she was everything he’d known his divine mate would be. Those dreams were long ago, so far back into history it didn’t register with humans as time. At his age, he was set in his ways. There was no changing. He sighed, stepped out of the room, and closed the door behind him.

Once in the kitchen, he breathed easier. Preparing food, he forced his mind to stay on task.

“Brother?” the mental voice of Kallen, his eldest brother, filtered in. Normally none of his siblings got through unless he invited them. Which he didn’t. “Is everything all right?”

He considered slamming the door between them and then stopped. Could Kallen know? He had Alina. They were Soul Bound, had been for centuries.

“How’d you know Alina was yours?” Andros gripped the edge of the ruined counter and closed his eyes. He hadn’t ever inquired anything of his brother. The sensation strange, made him uncomfortable.

“I knew deep inside,” Kallen’s tone serious. “No matter how many times I told myself she wasn’t my Twin Flame, I knew I lied. The connection was there, even when I didn’t want it to be.” A pause, then, “Growing up I vowed to not ever claim my flame-mate, if she existed, unless Father was Soul Bound. I didn’t want to be the cause of his pain, or my siblings’. That wasn’t meant to be. Our destiny is chosen before we’re born. We get to pick the path, but the end result is the same.”

Andros straightened. He wasn’t the only one who had decided a life for himself, only to find its course altered. “Thank you, Brother.”

“You are welcome, Andros.” Kallen’s mental presence disappeared as if knowing he’d served his purpose.

He gathered the food and drink and prepared himself for whatever presented itself. 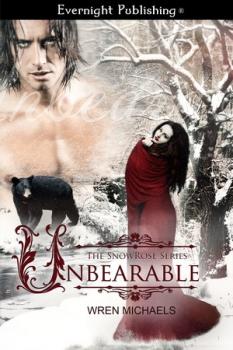