The moment I saw him pleasuring himself - alone in the dark forest - curiosity overrode my common sense. I watched mesmerized. Wanted him to catch me spying on him in hopes he would invite me to join him.

Luckily for me, he did. 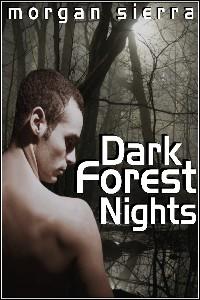 Dark Forest Nights is an erotically blended fantasy that carries a solid, realistic narrative.  We're allowed entry into the mind of the sexually frustrated woman...recalling her encounter with a naked stranger who's obviously more than what he seems.  You never know the characters' names, yet it's easy to become involved with them.  There's tension, yearning and no-holds-barred sex with an undercurrent of danger.   All and all, the author's writing style is stimulating and electrifying.  This story is a compact, well-crafted helping that leaves you with an intriguing flavor for more.  For certain, I'll be on the lookout for other works by Morgan Sierra.

Off to the side, in a decidedly lazy recline against a tree, was a man. By itself, this normally wouldn't have given me much reason to pause. The fact that he was naked as nature intended stopped me in my tracks.

No. That's not quite true.

What stopped me in my tracks and made my eyes go round in surprise was not just that the man was nakedwhich he quite was, no mistaking thatbut the fact that he was also pleasuring himself.

The up down motion of his hand was hypnotic and soothing. Each time he neared the head, I could see a gentle squeeze applied and his cock jumped in response. The sack beneath this lovely rigidity moved in rhythm with his pumping.

Licking my lips, I finally managed to drag my eyes away from the self-pleasure to realize that he had a fine layer of fur covering his legs, abdomen and chest. The hair on his head was so enmeshed with this fur that it was hard to distinguish it separately.

Blaming the growing twilight for limited vision, I again focused on more important matters. If I listened carefully, I could hear soft grunts coming from my exhibitionist. That was how I thought of him: an exhibitionist naked and exposed to the elements, heedless of my presence.

There was a small amount of fluid leaking from the slit at the head of his cock, making it shine. He ignored it and continued stroking his rigidity, the head now purple from the blood rushing there to answer his call. Light colored eyes gazed intently down upon himself as if this response was foreign and he was unsure of what to expect next.

Closing my eyes briefly, I tried to slow my breathing. I was as charged by his display as I had been in the moments I waited for my first lover to enter my unexplored channel almost twenty years ago. My heart raced. Blood boiled in my veins. The thrill of anticipation caused me to hold my breath. My head swam from dizziness. But most of all, most important of all, my pussy throbbed.