Shoved into a situation that tears Deirdre apart, she prays her suspicions about her husband are wrong. Glimpses of a powerful, handsome black man tantalize her, and his deep voice comes to her at unexpected times. Who is this stranger and how does he seem to always know when she needs him? The more Malachi follows his wandering heart, the more Deirdre finds herself drawn to her ghostly companion. Soon it’s clear her husband has no intention of rectifying his playboy ways, so Deirdre turns her grandmother’s book of Voodoo and faerie magic for help. Can she summon the power to keep Malachi with her...or will true love and magic from long ago release a new and powerful love? 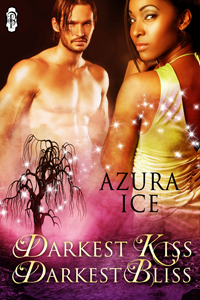 Her husband ascended the steps and paused as he realized the door wasn’t shut for the night.

“You’re late,” she said calmly, despite wanting to scream at him.

Malachi nearly jumped off the porch. “You scared the hell out of me! What are you doing out here so late?”

“I should ask you the same thing.”

“No.” He reached inside the door and flipped on the porch light. “I understand.”

“Are you running game?” She hated the desperation in her voice, but she loved him and wanted his love in return. If only he were a drinker. She could tolerate a man who loved beer or whiskey, but never a man with a wandering heart. “You be straight with me, Malachi.”

“No, I am not seeing another woman, babe.”

She sat forward, motioning for him to come closer. “Let me see your eyes.”

He remained by the door. “Oh, come on, Deirdre! I said I’m not cheating on you!”

“If you’re not running game then let me see your eyes!”

Sighing, he knelt next to her chair. Deirdre placed two fingers under his chin and raised his head so the light clearly revealed his eyes. She let her gaze wander up the handsome planes of his face to his slightly crooked nose and thick brows. She saw the lies, the deceit. The pain that sliced through her nearly left her panting for breath.

“Okay.” She released him, looked away so he couldn’t see the agony within her, and leaned in close, her nose an inch from his neck.

He raised an eyebrow. “Now you’re sniffing my clothes?” Malachi laughed, but sobered instantly at the stormy expression she offered him. “Didn’t Sally tell you what we’re doing at the woodshop?”

“We’re backed up on summer orders. We have so many contracts for footbridges, swings, gliders, gazebos, and garden lighthouses we’ve had to put in some major overtime. Sally’s brother hired two more guys to help with deliveries.” He took one of her hands and squeezed it. “It upsets me that she didn’t tell you. She and her brother delivered a gazebo to our neighbors several days ago. They were supposed to stop by and let you what’s been going on.”

“The very first night I was late coming home. We’ll have long nights until the summer demand dwindles.” He pulled her to her feet and gathered up the shawl. “Anyway, I haven’t wandered in until early morning on a few nights because I took a break and fell asleep. It’s better than driving home exhausted and wrecking the truck.”

Could she be wrong about him after all?

“If it will make you feel better, babe, call the shop and verify the hours.”

She shook her head, feeling both silly and hopeful. “I’m really sorry I jumped all over you, honey.”

He smiled, led her inside, and shut the screen door. He turned off the porch light. The shawl landed in a discarded heap. Malachi cupped one of her breasts, his lips grazing hers. Desire bloomed within her.

It's a Jungle Out There
Stephanie Williams
In Shelf
$2.99