Sequel to Daniel in Distress

Daniel and Cole manage Seyda Ranch, which is now Camp Seyda, a summer camp for adolescents who want to get away and learn who they are. Eighteen-year-old Darryl is a high school dropout from Detroit who has gotten into plenty of trouble back home, so his parents send him to the camp hoping he’ll start down the path to a better future.

At Camp Seyda, Darryl meets Miles, a counselor with a lot of good advice, and Reggie, another troublemaker like himself whose tough attitude draws Darryl's attention. Darryl isn't sure what his sexuality is yet, but he knows he's attracted to Reggie.

As he spends time with Miles, though, Darryl discovers he also has feelings for the counselor, too. Will Darryl learn the difference between love and lust? What path will his heart take?

The urge to bolt crossed Darryl’s mind again. The Rapid City Regional Airport was crowded, and he didn’t know if whoever was picking him up even knew what he looked like. Getting away would be easy. The issue was that Darryl had never been to South Dakota or Wyoming before, nor did he have any money for another plane ticket. His choices were to either sprint into an uncertain freedom, or attend this reformation camp his parents had signed him up for.

It wasn’t that Darryl completely opposed the idea of changing his life for the better. He was only eighteen and he had already done a good job of fucking it up. He was a high-school dropout, had narrowly avoided jail time twice, and he had the misfortune of being a black kid from Detroit. Everywhere he went he could feel the ever-present gaze of the establishment watching him, waiting for him to slip up so they could point him out as a stereotypical troublemaker and toss him in prison for something stupid. If he wanted any sort of bright future, he needed to do something about it now.

What scared him were the horror stories he had heard about places like this, the ones with gorgeous pictures of open fields and tidy cabins on the website that were actual Hell-holes once the counselors got a hold of you. There had been inspirational quotes and Bible verses on the website, too, which had convinced his parents this was going to be a nice place, just what Darryl needed. Darryl hoped it wasn’t too good to be true. He didn’t want to dodge jail only to wind up somewhere worse for four weeks.

Someone at the terminal was holding up a sign that said, “Camp Seyda Party Truck.” Darryl assumed that was his ride. Weighing his options, he decided someone like him was bound to draw more attention running around the airport unsupervised and he’d most likely end up at this camp or somewhere like it eventually. Furthermore, his parents had scraped up their savings and tapped Darryl’s college fund to pay for this, so he walked towards the sign, for their sakes.

The man holding the sign was pretty much how Darryl had pictured him: a well-tanned white guy in a polo with the camp name on the chest pocket. He seemed to be in his early thirties, since he had some wear lines on his face but neither his dirty blond hair nor his beard had traces of gray in them yet. He smiled when he made eye contact with Darryl.

“You must be Darryl,” he said, shaking Darryl’s hand. “I’m Daniel. If you don’t mind, we’re waiting on another arrival, but his plane won’t land for another forty minutes or so. Let’s go get your bags in the meantime.”

Daniel made pleasant small talk when the overall volume of the airport allowed it. Darryl was wary regardless and gave short vague answers. While he was glad that he hadn’t been tossed into the back of a windowless van the minute he landed, the website had promised it would “set wayward adolescents on the right path and help them build character for adulthood.” This was accompanied by pictures of smiling teens on horses or posing in scenic locations, but that could be staged for all Darryl knew, some attempt to lull parents into a false sense of security before they handed their kids over to strangers. If this Daniel guy suddenly flipped from friendly to freaky, Darryl was ready to run. 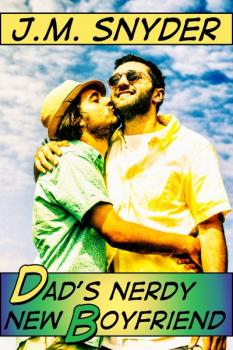