Dawn of the Apocalypse

Thinking they have thwarted Apòlladan’s efforts to commence his dark reign, betrayal in the alliance shifts power back into the hands of evil. With hope fleeting, our heroes realize one of the orphans they’ve found is gifted with Dreamsight, and his extremely rare abilities reveal Apòlladan’s next move. Having no other choice, Sir Angelo and the others try to sway an Alkani realm’s judgmental and prejudicial thoughts in favour of joining them in the final battle. Will their efforts help them form an unexpected coalition, or will the ‘chosen ones’ face Apòlladan alone? 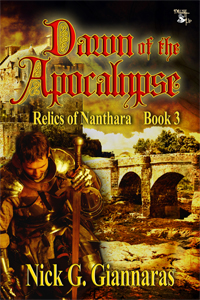 Dawn of the Apocalypse

General Somrayil stood, doing little to hide his haughty grin. “It is not the importance or danger involved which I question but rather the trust factor of your little group.”

Sir Angelo sensed the negativity brewing forth from this judgmental elder stick to him like a humid evening. Maintaining his concentration on the general, Sir Angelo kept his peace and listened with a critical ear.

“Aside from the eclectic host you have brought before us, let us first address this young human you have with you. Needless to say, the boy suffered at the hands of the enemy, and survived. Apparently, it was not his time to die. Despite dragging this crippled youth into hostile territory, we have been told the boy has Dreamsight.”

Subtle discussions spread among the council.

“Dreamsight, if it is what you say, does not manifest until early adulthood upon those so gifted,” Somrayil said. “To my knowledge, nobody has ever bore this ability early in life…nobody.”

Sir Angelo nodded. “You are correct, General. But not in this case.”

Somrayil smirked. “So, you gathered your gear and your ‘chosen ones’ and ran east like frantic lemmings because this boy said so.”

Sir Angelo’s forehead wrinkled. “It is obvious you do not believe in such happenings.”

“Not at his age,” Somrayil said.

“And why not?” Vindicar asked.

Somrayil glimpsed at Vindicar. “To have such an incredible occurrence reveal itself during such a dire time, I find it…odd.”

“Are you implying the boy has ill intent?” Sir Angelo asked. He concentrated on resisting the lashing he wanted to deal Somrayil.

Somrayil shrugged. “Anything is possible. I have seen and experienced enough in my life so far to warrant caution to those bearing unusual gifts or boasting of such grandiose things.”

“Tink’s gift is a blessing from Sovereign,” Vindicar said. “I take offense to your accusations.”

“I care not of prizes bestowed by deities, paladin. I am concerned with what I know.”

Vindicar rose from his chair. “I understand your voice carries weight in this council, and your cautious actions dictate your position as a watchdog for this assembly. Yet I warn you, sir not to allow pride and stubbornness cloud your decisions.”

The facial muscles rippled under Somrayil’s strained grin. “Quite… Shall we continue? I think the council well remembers this Elinthyrian ranger, Azin Sildanel,” he said, pointing to the assassin. “I think we also remember the disrespect and disgrace he bestowed upon one of our elder’s prestigious families—an act intolerable within our society, an act unforgotten, an act unforgiven. To worsen matters, you have brought a tainted race in these hallowed halls; a race

desired to be forgotten, yet he sits in our presence, breathing our same air.”

Azin sank in his seat, trying to maintain his composure under the peripheral glances from Boren who struggled against reaching for his axe strapped across his back. Sir Angelo cast a soft glimpse at Azin, amazed that both still remained calm under the verbal onslaught.

Somrayil continued. “For a group such as yours to involve the allegiance of two current members considered selfish, impure, and uncaring, who is to say you and your people will not do the same to us?”

Sir Angelo’s mind hazed over in bewilderment. The proper words to retaliate escaped his thoughts. He expected some negativity during the meeting, but what had transpired so far pushed him to the limits of comprehension and tolerability. “Haven’t our trials and successes shown any form of commitment to you?”

“Anyone could have participated in the journey you took and accomplished the same,” Somrayil said.

“Many did answer the call. Although some departed, many more have died in their unselfish service to gain victory for the good of Nanthara,” Vindicar said, noticeably irritated.

“With a heavy heart, we have accepted it from the beginning,” Sir Angelo replied in a controlled tone. “From the losses of our own, to the piles of Dwergen, human, Nivvick, and Alkani corpses that filled the trenches in Northwatch, they accepted it as well.”

Sir Angelo noticed some of the council murmuring amongst each other in response.

Somrayil chuckled, tossing a quick glance at those gathered. “A heroic gesture, Sir Angelo—attempting to cover up Azin’s mistakes by speaking on things bearing no significance

Sir Angelo leaned into the table. “Well, then General, by what means do you expect us to trust you? By your fancy dress? By your title? Perhaps your lofty position on this council?”

Somrayil scowled at the paladin’s retort. “If you were not a guest of Lord Imlutheeil, those would have been your last words spoken.”

Boren only managed to stand part way out of his chair before Azin grabbed his thick armored arm and stopped him.

“It appears you are attempting to make this a solitary show, to gain favor of those undecided on this matter, or perchance already decided by your influence behind private doors,” Sir Angelo said.

General Somrayil slammed his fist into the table. “I will not tolerate insolence from anyone, especially an outsider.”

“Then perhaps you should not badger our guests as you are, Somrayil,” Linfey said. Several Elinthyrian council members agreed with silent nods.

The irate general shot Linfey a hard glare before settling down to take his seat as the elder spoke. “There is truth to Somrayil’s caution of any visitor. Yet I feel your pessimistic view is null and void in this case, General Somrayil. Need I remind you of Celianna’s approval of this group before their arrival?”

“Regardless of this group bearing Celianna’s seal of approval, Linfey, it does not cancel Azin’s past,” Somrayil said, pointing an angry finger at the targeted assassin. “More likely than not, he has lied to his party to accomplish his gains.”

“Yer wrong, General,” Boren replied. “The Alkanien has been an irritant since we met, but he’s never lied about who he was or his desires. More than once, the maggot has risked his

“And here is another example,” Somrayil said, sweeping his hand from Azin to Boren. “Not only must we believe Azin, according to his peers, it is now compounded by the tongue of a polluted race. A race none of you approve of.”

“You speak of the past, Somrayil,” Chief Mage Xaneriel said, his black eye patch strapped across his atypical silver-streaked blonde hair. “You seem to be the one desiring the banishment of the alliance based on the apparent hatred you have for one of our own.”

Some of the Elinthyrian gathering mumbled in agreement, and others held a silent vigil under watchful stares.