As WWIII rages on Earth, War Correspondent Dax Rigby travels to the savage planet Arcadia to investigate and report on the Western Alliance’s mission there. Soon, he fights not only to save two intelligent alien species from extinction, but also to rescue a dying human outpost threatened by a mysterious disease. Facing assassination attempts, seduction from a passionate pilot, and his own mysterious powers of resurrection, Dax struggles to maintain his loyalties and complete his mission. The fate of two worlds hangs in the balance. Will he find a way to redefine both his identity and his destiny in time? 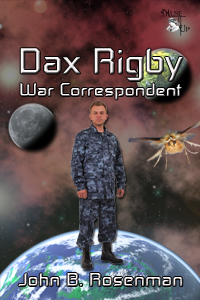 Outside, boots thudded across the ground—Campbell’s deputies searching for the leader of the conspiracy on Arcadia, the traitor who harmed and killed their comrades. Their feet crunched the dirt, and he heard a voice call out, knowing nothing could disturb Casey’s slumber.

Dax raised his hands and touched Casey’s shoulders. “Casey,” he said, “come back to me. It’s meaningless this way. It can’t end this way.”

Why not? Life was meaningless. He’d said it himself to Father Ben.

Death is death. The end to everything. Father Ben had disagreed. There is no death, he’d said. Only beginnings.

Dax tightened his grip on Casey’s shoulders and shook her. “Wake up, damn you. Don’t leave me behind!”

“Wake up, Casey!” he said, wondering if he’d gone mad. “You can’t die! I love you, and I want you back!” He shook her harder, so violently she rocked on the bed. “Damn you, damn you, damn you! Come back!”

At last, he tired and laid his head on her breast. There is no end, Dax. Only beginnings. Yes, perhaps Casey was already part of a distant galaxy, sailing the cosmic winds of her next life. If you want me again look for me under your boot-soles, some poet had written. Dax knew such wishes were useless. This life is the only one there is.

It took him a moment to realize her left eye socket was no longer empty. A bright blue eye now gazed back at him. And the left side of her face, once ravaged, appeared clear and unblemished.

Pulling back, Dax lifted the other eyelid—and felt a rush of wonder.

“I’ll be damned,” he murmured.

He rose and staggered back, feeling something rise inside him, filling him to the brim. Joy bloomed, joy such as he’d never known, and transcendent gratitude. There was also far more, feelings he had no name for.

He raised his hand and pointed.

Father Ben looked. Now they could hear the sound of Casey’s breathing as her chest rose and fell. A soft moan.

“Impossible! This can’t be!” Father Ben went to Casey on the other side of the bed and checked her pulse, eyes, and chest. Next he turned her gently to study her back. “No wounds! It all looks healed!” He laid her back and stood trembling. “By the Holy Mother Universe, Casey’s alive. She even has two eyes again!”

He snapped his fingers. “Vital signs. I must check them!” He rushed to a desk and returned with a small square device—a Vitex. He placed it against Casey’s throat.

Father Ben tore his eyes from Casey and looked at him. “Why not?”

Father Ben hesitated, set the device aside, and stared at him. The priest’s eyes were wide.

Dax moved to Casey and touched her cheek. It felt warm, and his heart filled with love.

“All my life,” Father Ben said, “I’ve prayed to be blessed, prayed to behold a Redeemer before I died. I grew old and sick; still, I always hoped. Finally, one flew all the way across the Galaxy to meet me, and I didn’t even recognize him.”

Casey’s eyes had closed in healthy sleep. Dax could almost feel her recovering. “What are you saying?”

“Beneath your pain,” the priest said, “I saw only goodness. It was as pure as your search for the truth. You’re a seeker, Dax.”

Dax laughed. “You saw all those things? Oh yeah, my aura. My sacred garden—right, Father?”

“Do not mock,” Father Ben said. “I saw your spirit the day we met and yesterday in your jail, from point-blank range. Sadly, my eyes had grown dim, and I did not recognize you. Today you have made it clear even to one as blind as I am. You have brought Casey back.”

“It took you to know it, Dax. You to bring it here and use it. No one else could.”

Dax’s joy was so intense, so intoxicating, he could barely follow such nonsense. “You make me sound some kind of cheap messiah.”

“Not cheap. Never.” Father Ben reached across the bed and seized Dax’s shoulder. “You’ve never had a sign or suspected? Never felt a deep, wordless knowledge?”

Beneath Dax’s fingers, a pulse beat in Casey’s throat. “Filled? Filled with what?”

“Filled with faith,” Father Ben said. “Filled with avatars, such as you, born of the Universal Spirit.”

Avatar? Dax searched his memory. Oh yes, according to the All-Faith, an avatar was an incarnation of God, a child of the divine universe. Horus, the human version, had passed through several incarnations, traveling to ravaged realms to fight terrible foes. Usually he died horribly.