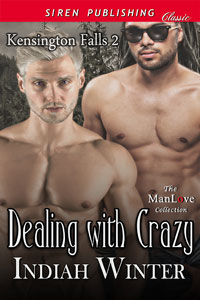 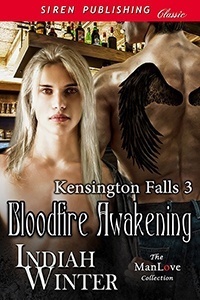 When Clay touched another one of the bars, he finally learned his lesson when he again felt a bolt of electricity shoot up his arm, making him lose his breath.

Placing his fingertips in his mouth, he walked over and sat on the bed in the corner with a harrumph.

He didn’t know how to get out of this. He was trapped.

The voice made Clay gasp. Turning toward the door, his eyes locked onto a fine-looking specimen. Tall, lean, and drop-dead sexy. Almost a foot taller than Clay’s six foot four frame, and he couldn’t help but find that incredibly sexy. Man over seven feet? Wonder if he’s anatomically proportional.

Clay’s eyes swept over the guy he was going to dub Super Sexy. Clay smiled at Super Sexy’s mop of a head. The black dreadlocks were thick and looked compactly coiled, flowing down to the middle of his back. They were taken care of and looked impossibly distinguished, laced with gray. Not a thing like the stark white Clay’s had become.

In addition, he wore sunglasses even though they were inside and it happened to be night. In his head, Clay started singing, I wear my sunglasses at night, while imagining the hunk doing a striptease to a pulsing beat.

As the male of Clay’s dreams drew closer to his prison cell, he noticed how thin the stranger looked. Clay couldn’t help the stab of concern that shot through him.

Shaking off the unwanted emotion, he gave a sniff. When the familiar scent pierced his nostrils, Clay couldn’t help the moan that escaped.

Watching the man freeze, the hellhound who had knocked him to the ground when he tried to attack Jeremy said again, “Hello? Am I in the right room?”

It was then Clay noticed the thin pole in the dog’s hand. Snapping his eyes back up to the sunglasses, Clay blurted, “You’re blind.”

Clay rose and walked over to stand in front of the barrier separating them. “How? You smell like a pure breed, how are you blind—”

Clay yelped when he unthinkingly grasped the bars again. Stepping back, the hellhound took a step forward and asked in a rush, “Are you all right? What happened?

Pausing at the sincerity in the dog’s concerned questions, Clay couldn’t help the chuckle that escaped. “I’m fine.” Then, in a goofy baby voice, he said, “Me just S-T-double-O-P-I-D.”

Clay slapped his hand over his eyes at how idiotic he’d just sounded when the hellhound didn’t laugh.

Then, all of a sudden, the Sexy barked out an amused guffaw and tried to cover it up with a cough. “Sorry. That took me a minute.”

Clayton was so shocked that he actually giggled. This time, he slapped his hand over his mouth. He sounded like a love-struck girl and not the four-hundred-and-ninety-nine-year-old demon he was.

Clay looked the stranger over feeling somewhat thankful the dog couldn’t see him, because if he did, he would no doubt notice the hungry look on Clay’s face that gave away the fact he wanted to eat the man alive.

Clay didn’t know if he meant that figuratively or not. He felt the strange need to drain the hound of his blood. Just the thought of a nibble sent a hunger-clenching pain shooting through his stomach. It made him curse the roaring voice in his head compelling him to take what he wanted, consequences be damned. The gluttony and greed were his two biggest faults. The other five out of the deadly seven were minimal. Though this hound is seriously making lust take notice.

The mumbled question from the dog startled Clay. He was about to answer when he suddenly grew suspicious. “Why do you want to know?” So you can turn me in to the Isherai? The damned council that governed the abyss realm?

The hunk shrugged. “Just interested. My name is Lyzol.”

If the hellhound told the truth, then he was the famed ex-alpha of Lucifer’s legion. Rumor around the water cooler was that the man had been a complete badass in his glory days as one of the few known hellhounds to defy Master Lu.

Looking back at Lyzol, Clay knew the Lyzol told the truth when he remembered looking into Lyzol’s eyes.

Red irises indicated they were a part of Lucifer’s legion, yellow for every other common-born hellhound and blue for mated. When a hound defied their master, their irises turned black while the pupil took on the color to indicate their status of red, yellow, or blue.

Deciding it would be okay, he said, “My name is Clayton Fischer. But I like to go by Clay.”

His breath caught when he saw Lyzol smile. The hellhound passed drool-worthy into the I wanna hump his leg zone.

Growling when Clay straddled him, he grabbed his mate’s hips as Clay ground his denim-trapped shaft onto Lyzol’s stomach. “I—want—you—” Clay began between kissing him all over. Pausing, Lyzol felt goose bumps erupt across his whole body when Clay nipped at his earlobe, before hissing, “I want you to suck my cock.”

Smiling, Lyzol flipped them and began to lay butterfly kisses down his mate’s neck. Running his hand up under Clay’s shirt, he swooped them to his lover’s hips and gave them a squeeze before shoving Clay’s shirt up. Hopping over the material to continue trailing his mouth down Clay’s chest, he swiped his tongue every now and then, marveling at the taste.

Snorting, Lyzol had to fight the urge to spank the demon. Barely managing to hold back, Lyzol continued to work his way down.

Once his lips brushed the edge of Clay’s jeans, Lyzol snaked his hands down and, with ease, undid the top button before lowering the zipper. As he pulled down Clay’s jeans, Clay angled his hips, making Lyzol’s job easier.

Once he had the denim bunched up around Clay’s knees, Lyzol ran his hand up Clay’s thigh and circled Clay’s cock a few times.

Having mercy, Lyzol gripped his mate’s dick and gave a leisure stroke. Hearing Clay hiss, Lyzol felt himself peacock at pleasing his mate.

Leaning in, he bent Clay’s cock up toward his navel before Lyzol kissed his way down the underside. Loving the taste, he soaked up the pleasure of pleasing his mate, scared that it would disappear.

Clay had been adamant about leaving. Lyzol hadn't deluded himself into thinking that Clay’s feelings had evaporated. Lyzol feared he’d wake up one morning to find his mate had ditched him. Lyzol didn’t want to think about it, but he knew he had to change his demon’s mind and convince Clay he wasn’t a bad hellhound.

Kissing his way back up to the tip of Clay’s cock, Lyzol knew the way to his mate’s heart was goofiness. Clay liked to laugh and Lyzol would do anything to hear his mesmerizing chuckle.

Suckling the tip for a second, Lyzol pulled back and said, “Okay, your turn. Truth or dare?”

“What?!” Clay freaked, the bed jerking, making Lyzol wonder if his viscer had sat up. “You can’t be done.”

“I sucked your cock, I did the dare. Now pick.”

Unable to hold back his smile, Lyzol told his mate, “I dare you to run up and down the hall naked.”

Clay laughed before saying, “Really? You’d risk someone else seeing my ass?”

But thinking over his dare, he decided Clay was right. “Okay, scratch the running up and down the hall naked. How about we just fool around?”

“So you’ll continue to suck me off?”

“Then lets sixty-nine it, baby,” Clay said a moment before he attacked Lyzol.

Lyzol fought to be in control when Clay actually succeeded in pinning his down onto the bed. Muscling his way out of the hold, Lyzol grabbed a hysterical, laughing Clay and spun him around to position Clay’s face right in front of his groin.

Feeling around blindly for Clay’s cock, Lyzol swallowed his mate down, succeeding in shutting him up.

Working his tongue at the slit, Lyzol scooped out a drop of pre-cum, loving the slightly bittersweet taste that cascaded over his senses.

Lyzol hollowed his cheeks as Clay began to pant and pet Lyzol’s thigh. Lyzol growled for Clay to jump into gear, and his mate actually giggled as he slid his hand from Lyzol’s leg to his straining erection.

Trapped under his jeans, Lyzol’s cock pulsed at the pressure applied. Popping off his mate, Lyzol resorted to his alpha tone. “Take my dick out and suck it.”

Clay chuckled. “Your orgasm will only happen if I go first, puppy. Remember that. You have to please me before you can achieve your own pleasure.”

Narrowing his eyes up toward the direction of Clay’s voice, Lyzol said, “So I’m just here to pleasure you?”

Feeling a hand slap his, Lyzol released his mate’s cock as Clay shuffled around and began to undo Lyzol’s jeans. “Of course you are,” Clay said without a bit of hesitation. “It’s written in the rule book.”

“What rule book?” Lyzol asked as Clay shoved him to his back and fished out his cock. Placing his hands behind his head, Lyzol wasn’t sure why he was still talking when he’d gotten what he wanted—his mate touching his bared flesh.