Death Be Pardoner To Me

The Wars of the Roses were terrible years when armies swept back and forth across England and kings were the pawns of arrogant nobles. In these savage times, three royal brothers defeated all those who would rob them of the throne but then, from within, they faced a new enemy.

One brother, driven by envy and pride, staked everything on a desperate gamble and allied himself with the imperious Earl of Warwick.

With Warwick's army at his back.,, a king's brother planned to remove the king.

Could he carry it off and realise his dreams of wearing the crown himself, or had destiny made brutal and more tragic plans for George, Duke of Clarence? 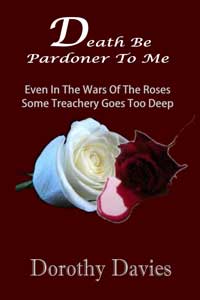 Death Be Pardoner To Me

George duke of Clarence was the third living son of Richard, duke of York and Cecily Neville. Their first two sons were Edward, earl of March, later Edward IV, and Edmund, earl of Rutland, murdered on the battlefield at Wakefield, December 1460, during which Richard duke of York was killed. George’s younger brother, Richard, became duke of Gloucester and later King Richard III.
The duke of Clarence lived at the time historians refer to as the Wars of the Roses, although it was not known by that name in the 15th century. This was actually internecine warfare between two major ‘houses’, Lancaster and York.
Henry VI, a Lancastrian, was king of England from 1422 to 1461. He had a son, Edward, Prince of Wales, by his wife Margaret of Anjou.
Edward IV was proclaimed king in 1461, after winning major battles against the Lancastrians, despite the fact that Henry VI still lived.
An uprising drove Edward IV into exile and Henry VI regained the throne for a year.
Edward IV returned to England and reclaimed the throne, sending Henry VI to the Tower, where he later died.
Despite further uprisings, Edward IV held the throne of England until his death in 1483. His son Edward, by his wife Elizabeth Woodville, was officially Edward V, until the allegations of a pre-contract of marriage rendered the marriage illegal and the offspring of that marriage illegitimate, thus disbarring Edward V from becoming King. Instead Parliament offered the throne to Richard of Gloucester, who was Lord Protector under King Edward’s will. He became Richard III.

This is a brief outline of the major players of the time. Within this framework, George duke of Clarence played his not insignificant part in English history.

Of being king.
Of being the owner of Fotheringhay.
Of having a wonderful marriage.
Of fathering many children.
Of having power.
Of being part of the York family.
Of living to an old age.

Where has Fortune taken my dreams? Here am I, a prisoner in the Tower of London, in luxurious apartments I will admit, but a prisoner for all that. I was brought here by order of King Edward IV, my own brother.
My liege ran out of patience with what he called a wayward, treasonable, unreasonable brother. My liege took a quill and signed his name on the warrant of execution with bold strokes – I know, they showed it to me, his men who came with mixed emotions to tell me of the decision – and in the bold strokes with which he signed his name, I knew there was no going back. No words would move him; no prayers could reach him.
The men came with eyes that said ‘poor man, ordered to die by writ signed by his own brother.’
Eyes that said ‘well, Clarence, you overstepped the invisible line. Much you should not have said, much you should not have done, but you said it and you did it. What kind of prize fool are you?’
Eyes that said, ‘so much for royalty and aristocracy, the end comes to us all at some time and who are you to think you could outwit it, foolish one?’
Then they left me alone with my thoughts, paper, ink, quills and a supply of malmsey wine. They left me to solitude and loneliness. I reflect on my dreams as the wine fails adequately to dull my senses and my thoughts, no matter how much I drink, for of a surety my very blood must be malmsey wine by now and it makes no difference to me. I pour it out as fast as I pour it in and somehow it passes through my body without affecting me. Too many drunken nights, Clarence, I say, catching myself staring at the jewelled mazer as if I had not seen it before, though it has been in my hand virtually the entire time I have been here. Too many drunken nights, days, weeks, months in the past and now. But hell and damnation, how else do I stop the pain in my head? The pressure that is like a blacksmith tightening his hold on a piece of metal and then hammering it endlessly, endlessly, endlessly until I want to shriek aloud to the heavens, in the name of all that is holy, end this and end it now!
No one knows of this. Pride stops me saying ‘I have this problem…’ for in all honesty, to whom can I turn? I know, deep inside, in the place where all truth is known and none can disguise it, that my physician could do nothing for me, nothing to take the pain from my head, nothing to prolong my life. I know it and accept it.
I could send a note to my brother the king to say he could hold his hand, he could delay the execution, for I will shortly leave this world of my own accord and thus take the taint of ordering my death from his mind and his reign. Why do I not do it? Why do I hesitate to write such a note? Is there still a part of my conscious mind which resents all that has happened? The way the Yorks acted as if I was not a York; as if I was not brother to both March and Gloucester; the arguments, the battles over land, the forbidding of my marriage, the lack of support at my trial; my complaints seem endless.
But what of my actions over the years, what of my treason? Was my brother the king not right in all he said and did against me? My thoughts endlessly charge at one another, knights in a joust, the one trying to knock the other from position. He was right – he was not right. In reality, it does not matter for it is too late. There is no going back. There is no undoing that which has been done, written, said aloud to the Court. My brother the king would not – could not - reverse his decision now. It would show weakness and he would never allow that.

Of my dreams - let me return to my dreams – I say this.

The dream of the crown was taken from me.
Fotheringhay waits. I will not go there again.
My marriage lasted just seven years.
Of my children, just two are left to the world.
He who supported me, the Kingmaker, was killed.
I always felt like an outsider within my own family.
As for old age, I am 28 but will not live to celebrate the occasion of my becoming 29.