Death in the Polka Dot Shoes: A Novel

In the small fishing village of Parkers, Maryland, on the Chesapeake Bay, there is no more independent soul than the lone oysterman or crabber who sets out every morning in pre-dawn hours to search for oyster beds or empty his crab pots. It’s a harsh life.

When Jimmy Shannon, a Chesapeake waterman, dies during a holiday fishing trip for Blue Fin Tuna, it’s almost unbelievable. Stranger still, is his last will and testament that requires his brother Ned Shannon to give up his law practice in Washington, D.C. and return to his family’s traditional life on the Bay. Neddie accepts the challenge, takes over his brother’s crab boat, practices a little law on the side, and encounters the strangest string of characters in the community.

The cultural changes are dramatic, especially after it’s discovered that Jimmy’s death was no accident. He was murdered during his encounter with the giant tuna. Neddie is forced to balance the life of a crab fisherman with a small town law practice, while aiding in the investigation of his brother’s death.

The murder goes from sublime to bizarre when Jimmy’s body washes ashore on a Cape Hatteras beach. At the same time, Neddie discovers the passions and values his family has known for generations, and the small town relationships that give meaning to the joys of friendship.

About the Author:
Marlin Fitzwater is the author of several books including a memoir, a novel, and short stories. He received America’s second highest civilian achievement award, the Presidential Citizens Medal, from President George H. W. Bush in 1992. He was Presidential Press Secretary to both Bush and President Ronald Reagan. He is from Abilene, Kansas and is actively involved with the Marlin Fitzwater Center for Communication at Franklin Pierce University. He is married and has two children. 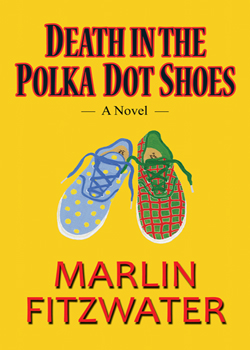 Death in the Polka Dot Shoes: A Novel