Clint Folsom was no stranger to murder even before he lost his innocence to other men. The distinction of the NYPD homicide detective is his celebratory gay male promiscuity, which the police department frequently finds helps it close cases and thus makes Folsom a valuable investigative asset. This precursor to the Clint Folsom mystery series illuminates the elements of slow but relentless death of young Folsom’s adolescent innocence under highly unusual circumstances in narcissistic and hedonist Hollywood. The events that not only developed and sharpened Folsom’s sexual proclivities are revealed, but it also illustrates why men gravitate to him like bees to honey. The murder mystery folded into the plot of a young man’s journey to manhood illustrates reasons why Folsom is haunted by his past and driven by his profession. 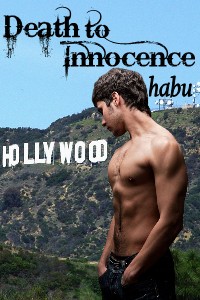 "This is something Habu always does just right: make the bad seem so good! Once I finished reading it, I rushed to buy the rest of the Clint Folsom series. Hot Stuff!"

We were both watching Tilton and Emilio at the side of the pool house, where Tilton’s upward strokes seemed to be going on forever and Emilio had collapsed now and was just bouncing up and down on the wall like a rag doll. A brief image of how this must be rubbing his back raw flitted across my mind, but even that I found arousing. Sweet and sour; pleasure and pain. I shuddered.

“Yes,” I admitted in a small voice.

“Yes,” in even a smaller voice.

“I want him to do it to me too,” Robert whispered.

I looked around at him, surprised about where he had taken this—no admonition, no “You mustn’t.” Just the acknowledgment of how alike the two of us were. And the wide gulf that inevitably separated us because our wants were too much the same. I resented him a bit then. He’d already taken Gene. Now he wanted Tilton too.

“What is it I have that men want?”

“You mean besides being young and drop-dead gorgeous?” Robert said with a laugh. But when I didn’t answer, he turned more serious. “They want your innocence, Clint. Did Tilton say what he wanted from you?”

I thought on that a moment, but then I remembered. “He wanted my cherry. He wanted to pop my cherry.”

“Precisely. Tilton wants them young and innocent. He wants to take them far down the path. There are rumors about what he does—and that he films what he does and sells it. He will take a young man to the edge—and maybe beyond.”

“And yet you want him—you want that?”

There was a moment of silence, and then Robert said, “Yes, I guess so. I want to know where the edge is. And a man like that . . . I want that too.”

“Then we really are alike,” I said. I shuddered at the thought—not so much at the thought of what Tilton did but at the thought that it blindly intrigued me. “But men. Regular men, not ones with the appetite of a Tilton. Is innocence what they want too?”

“That’s what they all want, Clint. But in your case it won’t stop there. You have so much more that they will want, even after you’ve lost your virginity. They’ll be attracted to your own want and your own openness for it. That’s what brings a man like Tilton buzzing around it. It’s the peculiarity of your upbringing. I can tell. I saw it and feared for you in your vulnerability. But I also envy you. Because as you grow older, it will work well for you.”

“Your openness and your want. You’re so intense. I can see that you’re just bursting with want. When men cock you in years to come, they will be aroused to new heights by the joy with which you receive and ride their cocks—and your insatiability in opening your legs for them. You will make men feel like supermen. There’s no greater feeling you could give them. And you’ll do it all without them losing their sense of your innocence. So each time, for them, it will be like the ultimate—taking your virginity. And the enjoyment they will receive will be multiplied by the enjoyment they sense that you get from it.”

“But, it won’t be real innocence, will it, Robert?”

“No, no, it won’t. But it will be enough for them to feel it is. It will make them supermen and they won’t be able to stop sniffing around you. And as long as you are enjoying it, it’s all good.”

“Then what will be the death of innocence for me? Have I already passed that?”

“No. The death of innocence for you will be when you go looking for it. When it stops being the man tracking and seducing and dominating you—but you going to him and begging for it—knowing that that particular fucking is bad for you, but begging for it nonetheless. But by then, there should be no tragedy in it. You will be ready and will have already experienced the thrill of being thoroughly, wondrously fucked.”