Galactic P.I. Majestic Kane is hired for a simple task, deliver a package, wait for an answer, and return. After surviving a crash on the backwater planet Skalos, he finds himself in real jeopardy, a fight for his very life, against the local deadly beastlike inhabitants, the Gorlots. Kane must get to safety, before his time runs out. 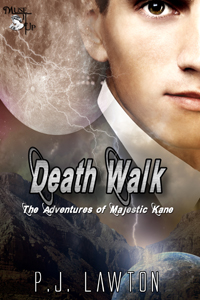 At the edge of the site, closest to the dome, was the newly-dug mine entrance. As Kane approached, he could clearly hear low moaning. Someone, or something was still alive. Using extreme caution, he walked over to the entrance. Blaster ready, he tossed aside a large piece of corrugated metal. Lying there in the dust was a badly-injured man. The man was Gregan, like him, Kane could plainly see. However, he was in a very bad way.

The Gregan’s nasty head wound showed part of his scalp. His left ear was missing. His stomach had been ripped open, partially disembowelling him. Kane viewed enough wounds in his time to know the man wouldn’t live. He decided to make him as comfortable as possible.

As Kane reached to pull him to the shade of the entrance, the dying man attempted to raise a hand and speak. Kane squatted down to place his face as close to the man as possible.

“Do, do you have…any water?” The words came out as a rasping croak, in Gregan.

Kane automatically reached for his water container and pressing the built-in drinking straw to the man’s dry cracked lips, let a small amount trickle out. The man’s eye, dulled with pain, indicated his gratitude.

Realizing the man was slipping away very fast, Kane decided to try for some information.

“Can you tell me what happened here?”

The man blinked once. “Gorlots, a large herd, hit us just at daybreak. They looked—organized. We…we never had a chance.”

“But,” Kane asked, “what about the droid guards?”

Kane didn’t understand. From what the Argo’s Captain told him, there should have been around a hundred android security guards protecting the miners. Something was awry.

“I don’t understand, why no droids?”

It took him a couple of tries but finally the man was again able to speak. “Miner Counsel decided they couldn’t be trusted. Deactivated most, destroyed those who refused deactivation.”

Kane was stunned. That surely was the stupidest thing they could have done. Droids were far superior to humanoids when it came to protection duty; they didn’t need sleep, and didn’t need food. After what happened on Protus III, all re-activated droids had been fitted with a fail-safe device. Every forty-eight hours they had to plug into a data processing and integration terminal for re-charging and full system scan. If any malfunctions were detected, they were either fixed on the spot, or the droid was completely shut down pending repair. It could have been an integration terminal problem. A lot of folk still didn’t fully trust the droids, even with the fail-safe system. The miners must have been truly paranoid if they were willing to chance it without the droids for security.

Kane took a hasty look around. “How long have the Gorlots been gone?”

When he got no answer, he looked back to the miner. The man was dead.
Slowly reaching down, he closed the lifeless dead eyes. Then, lightly placing the tips of the fingers of his right hand on the man’s forehead, he quietly spoke the Gregan afterlife departure ritual, “Go now, in forever peace.”