In the male-dominated world of Ranexx, Decima finds herself as the foremost pleasure slave in Governor Doleman Allus' stable of flaxen-haired beauties. She is poised to depart for the Imperial Palace when Allus takes her most precious love from her, using it as a tool to motivate her to achieve his goals for her. He expects her to become no less that slave consort to the Emperor himself, to bear the next Emperor from her womb. However, Decima longs for love in this world of enslaved and sexually used females, and although she has the tools and the beauty to seduce any male, she keeps her own consul on whom to serve. Will Decima be a beautiful, sexual puppet in Allus' rise to power and glory, or will she find another way through the cruel realities of Ranexx to succeed in her own way?

The Great Hall, or as Allus called it, the Hall of Flesh, had doors of thick, black-wood from the Kabora tree. The doors bore the seal of his office which showed giant hawthon birds, now quite extinct, flying over the mountains of Abundacium. In times long passed, the predatory birds would swoop down on people, Master and slave alike, and carry them off to a brutal death. In this capacity the giant birds represented messengers of death sent from the Four, the male gods of the Empire. As she'd been trained, Decima fell to her knees pressing her face to the stone floor as Jomar opened the heavy doors. From this supplicant position, she heard her Master's voice.

"Come, my lovely Decima, attend me. We have only these suns and the upcoming moons to spend together before you go off to fulfill your destiny." Allus was a trim, energetic man, short of stature but still vital in his older age. Decima knew he could still fill and pump and slave girl's hole with authority. Although his hair had whitened, and his skin gone leathery, Decima still trembled to his touch.

"Thank you most kindly, Master. This slave hopes to serve well." Decima intoned in a loud voice because Allus had trained her to be proud to be his slave. She crawled forward on hands and knees expecting to follow him about on his daily duties as a pet might, but was shocked at his next command.

"Rise, Decima, and walk beside me with your hand in mine. No crawling on your knees on these suns; your training has earned you a place beside me."

Rising hesitantly, Decima took his offered hand but was instantly feeling strange to be standing beside her Master rather than kneeling or bowing. Looking about the hall, she noted the long banquet table, but her eyes were as usual distracted by the living dcor of the Hall of Flesh. Ten nude slave girls, five to a side, hung from the walls of the long room. The girls were all hung like ornaments, with metal bars holding their wrists and ankles wide apart. The wrist bars hung from stout metal hooks, while the ankle bars were secured to the wall. They hung at least the height of three Master's high above the floor, and each girl-ornament was impaled on a wooden phallus sticking up from her ankle bar. To assure they felt no sexual pleasure their clitoral bulbs were severely clamped to prevent engorgement.

The girl-ornaments had been made functional too. Each mouth was gagged with a bit rising from the mouth and holding a ring of six candles. The slave's heads were pulled back slightly to allow for the candle wax to drip slowly onto breasts and bellies providing more exquisite torment.

Decima knew all these girl ornaments were common household slaves, as it was deemed a waste of a pleasure slave to subject her to such menial duty. What she wasn't sure of was the nature of the task for them. Is this punishment for household slaves or merely a duty rotated around? For pleasure slaves, whose duties are almost totally sexual in nature, it would be exquisite torture to hang in this way, but do these kitchen, garden, field, and serving slaves view it that way, or as simple service? 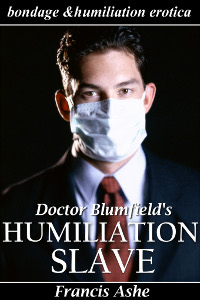