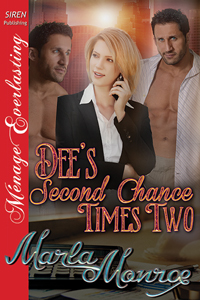 Andy watched their woman squirm, open then close her mouth, and squirm again. He couldn’t help but smile at how uncomfortable she was now that he’d called her on the lie she insisted on spouting that they didn’t do a thing for her anymore. Hell, it was only fair. She kept them so hard they probably spent just as much time jacking off in their office bathroom than they did actually working these days. It was ridiculous when she was in the same frustrated state.

God, they’d screwed up. Part of it had been her fault, but then if he were honest, that wasn’t entirely true either. He and his brother had known that despite her age, Dee was essentially naïve to how men and women related and reacted with each other. They’d gotten their pride stung and chosen to ignore what they knew deep down inside to be true. They’d told themselves that since they weren’t engaged to her that it was fine to date someone else.

I can’t believe we were such asses. I knew better and should have said something to Amos, but I let my ego do the reasoning with my dick instead of my brain.

He put a stop to that line of thinking. It wasn’t going to do any good to go over it again now. They’d both beaten themselves up over it on an almost daily basis for nearly a year. They’d hash through it one last time when they had Dee sitting between them in their home. Then it would never be mentioned again.

I can only hope that’s the way it goes. She deserves better than us, but dammit, I can’t let her go, and I know Amos won’t.

“I—I already have plans for Friday night.” Her shaky voice would have been cute if not for the seriousness of the situation.

Amos beat him to answering her. “Cancel them. This is more important than anything you might already have planned, Dee.”

“Really, there’s nothing more to say, Amos. I don’t understand why you’re still bothering me. I’m not the one who cheated,” she whispered back.

“Dee, just give us the chance to talk through it. Yes, we cheated, but there’s more to it than that. Please, baby. Just let us have our say. That’s all we’re asking,” he said before Amos could screw things up.

He loved his twin brother, but sometimes the idiot spoke before he thought through what was going to come out of his mouth. They needed to be careful until they’d resolved the problem with Dee.

He watched as she nibbled on her full lower lip. It was one of the little things that was so endearing about her. He watched the way her light-blue eyes clouded as she thought about what they were asking. He longed to pull her strawberry blond hair from the ponytail she wore to keep it out of her eyes when she was working. At least it was better than the tight bun she’d worn it in for years.

The slightly flared skirt didn’t hide her soft curves and the frilly blouse only accentuated her plush breasts and the ample cleavage he knew was hidden between the ruffles. He longed to brush his hands along her cheeks with their fair skin that blushed so prettily at the least compliment.

At only five feet, four inches, Dee’s soft figure was perfect to them. They’d never gone for slender, willowy women and couldn’t see what the draw was for other men. He enjoyed hugging Dee and knowing she didn’t starve herself or obsess over everything she put in her mouth. She was healthy and took care of herself. That was all that mattered to him and his brother.

“I don’t understand what more there is to talk about.” Dee looked from him to Andy. “There’s no excuse that makes cheating okay in my book. If you cheat once when we are seeing each other, then you’ll end up cheating again. I can’t go through that even one more time, guys. I’m sorry.”

“Dee Dee. We aren’t trying to excuse what we did. We know we screwed up, but we need to talk to you and tell you everything that happened and how we were feeling. We want another chance and the only way that will ever happen is if you understand what we were thinking.” Andy sighed. “We really want another chance with you, honey. You mean everything to us.”

Amos could tell that she was wearing down. Her eyes held unshed tears that nearly tore him up inside, but whatever it took to persuade her to listen was okay with him. He would make it all up to her later.

“If I meet with you Friday night, will you promise to leave me alone after that?” she finally asked.

“If after Friday night, you still don’t want anything to do with us, we’ll leave you alone,” Amos said before Andy could answer. He didn’t miss the angry glare his brother flashed over Dee’s head though.

Dee’s shoulders sagged and she nodded before speaking. “Okay. I’ll talk to you Friday night after work. I’ll walk over to your office after I close up.”

“Why pick me up if we’re just going right back to your office to talk?” she asked, narrowing her eyes at his brother.

“We’re going to go out to eat first,” he said, causing her to turn her attention back to him.

“I didn’t agree to have a meal with you. That looks too much like a date, and I don’t want people to think we might be getting back together again. They’ll drive me crazy wanting to ask questions that I don’t want to answer,” she said.

“Not a problem,” Andy said, making her swing her head back around to his brother. “We won’t go anywhere in town to eat so people won’t see us. Will that work?”

“I suppose.” She didn’t sound convinced though. No doubt she’d regret agreeing after having time to think about it over the week.

“Great. We’ll leave you to your lunch and talk to you later, Dee,” Andy said as he stood up.

Amos followed suit and stood up as well. Before he could stop himself, he bent over and kissed the tip of her nose. “Enjoy your lunch, baby girl.”

“Warm vanilla cookies. I swear you taste like a cookie, Dee. I could eat you all over and never get my fill.” Andy kissed his way down her leg then back up the other one.

She wasn’t even aware of what Amos was doing until her bra suddenly loosened and nearly fell off. Out of reflex, Dee quickly lifted her hands to hold it in place.

“Easy, baby girl,” Amos whispered in her ear. “It’s okay. We can stop at any time, just say the word.”

“I don’t want to stop. It just surprised me.” Dee was completely on board with being with the twins, but it didn’t mean she wasn’t nervous or self-conscious about her body.

“If anything we do bothers you, just say so, honey. We’d never hurt or scare you for any reason. All you have to do is tell us to stop or wait if you have a question or if you’re uncomfortable. This isn’t an all or nothing situation, Dee.” Andy’s face staring up at her from his position of kneeling at her feet felt amazing. She wasn’t into power plays or anything, but for this man to worship her body like he seemed to be doing gave her a rush better than any drug available.

She actually whimpered when he ran his tongue around the elastic of each leg. The sensation was so intense, it was almost painful. Dee had never been this aware of her body before. They were tearing her down lick by lick and nip by nip. Every move by them ramped up her anticipation to the point she thought she’d go crazy by the time they actually touched her.

Amos slowly moved her hands from where they were clutching her bra to her breasts until the lacy garment dropped to the floor. Then he positioned her hands over her breasts and squeezed them, making her own hands massage and mold the sensitive mounds. He pulled her hands just far enough back that only her nipples rasped against the palms as he moved them over and over the engorged tips.

“This is the most important part, baby girl. Seeing your eyes get dark and the lids so heavy you can’t keep your eyes open really turns me on. I like how your body gets limp so that all that is keeping you on your feet is my strength. That really gets me hot, Dee Dee.” Andy dropped a wet kiss to one shoulder then licked up the side of her neck where he nibbled at her jawline.

Andy slipped his fingers through the side of her panties at the leg openings and teased her skin before slowly pulling the lacy material down. The silky garment lowering down her body almost felt like having lots of tiny hand hands caressing her as it slid down her ass then her legs to pool at her feet.

Hot breath tickled the skin under the curls topping her pussy. She kept her mons groomed so that she had a perfect triangle of them sitting just above her pussy lips. Andy rubbed his nose through the curls before planting kissed along her pelvis above them.

“You smell like honeysuckle, Dee. Sweet, heady, fragrant flowers that make me want to test your flavor just like we did with the honeysuckle on the vines every summer.” Andy nipped the skin just at the bottom of her pelvis over one thigh. “Do you remember pulling the stamen out and sucking the nectar from it, Dee? I do. I bet you’re going to be just as sweet when I suck your nectar.”

All she could do was sway on her feet and moan. She was so glad the two men were holding her up. She didn’t think there was a bone left in her lower extremities to help her stand.

Andy hadn’t said anything dirty to her yet he’d gotten her so hot and wet she could already feel her pussy juices sliding from the slit to wet her inner thighs. The twins had always had an effect on her. In fact, Dee had started keeping a supply of underwear at the office in her connected bathroom just for that reason. She often ended up with wet panties when she ran into them over the last year, but this was several steps beyond that. She could discretely change her panties once she returned to her office when that happened, but no change in panties would cover this much arousal.

“God, Andy. What are you doing to her down there? I can smell her from here. It’s got my cock so hard I’m going to have to get rid of my pants soon.” Amos’s words sent another surge of liquid heat deep inside her cunt.

“Get her to the bed, Amos. I’ve got to spread her open so I can taste every inch of this hot pussy.” Andy swiped his tongue up her pussy lips right before surging to his feet.

“Ahhh!” Dee couldn’t stop the yell at the feel of his tongue across her sensitive folds.

“Come on, baby girl. You’ve teased us enough. We need more,” Amos said just before he picked her up and carried her over to the bed.

Caught Between Hawk and Gunner (MFM)
Marla Monroe
In Shelf
$4.99 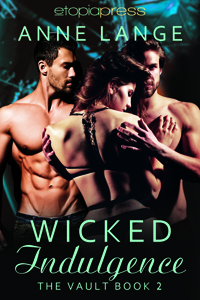 Caught in the Middle of Their Love (MFM)
Marla Monroe
$0.99
Less than 3 days left
Tweets by
sirenbookstrand